I may have used this quote to name an earlier blog. I don’t care. I like it that much…

Oh, Forrest.  One day he just decided to run and he ran until he was done. I respect that. There is no mention of his pace, his diet or the coordination of his cross-country team.  He just wanted to run.  It really does clear the mind.

I “ran” my first race in NYC – the 2008 Corporate Challenge 5k.  I chuckled a little as I typed that.  It was a pitiful attempt at a run.  When I was finished, the lesson I learned was that for a person in “ok” health, I sure was out of shape.  I walked three quarters of it. It was fun with coworkers and that is what counted most.  Our shirts read “Will Run For Beer”.  And, we did.   This is Erin’s back, she is mentioned in my blogs quite a bit.

While living in New York, I would take long walks and sometimes “jog”.  I was never serious about it.  I loved working out in the gym and when I felt my fitness needed a fine tune, that is where you would find me.

January 2010 – while sitting on a crowded train headed into work my phone started buzzing.  I looked at it – it was from my parents’ house.  They never called at that hour of the morning.  I looked at my seatmate and said, “Sorry, I have to take this.”  I always hated random strangers talking on their phone so close to me and I usually avoided taking calls on the train because I didn’t want to be “that” person.  But it was my parents. I answered and it was Dad.  Why is Dad calling me?  He absolutely never calls!  That was when the packed train car of strangers became intimate with the details of the most devastating blow of my life.  Having a cell phone conversation with Dad, being hard of hearing, required me to shout into the receiver and then pause for the response.  Ma had a heart attack while on dialysis, they were going to the hospital, come home now.  A week later we would remove her from life support and I would lose someone who was with me from moment zero of my life.  The effects of that loss are felt to my core to this day over six years later. Ma was a stubborn woman (I know apple/tree).  She suffered from Type 2 Diabetes, obesity and a multitude of side effects from those two issues. When I was younger she would try every diet fad that came along (aerobics classes, sauna suits, ordering meals, Jane Fonda – thank God there was no internet in those days). She would yo-yo on her weight, eventually bore of whatever fad she was working on at that moment and then go back to unhealthy habits.  During one of these adventures she decided to get her stomach stapled (in those day there was no lap band surgery, it was stapling off the stomach).  It was a botched job and I would watch as my Ma would try to eat meat, it get HUNG in the staples and the proceed to vomit until we could get her to the hospital to take care of the issue. With all of the issues, the vomiting, the not being able to eat right – she lost so much weight and I hate looking at the pictures of her from that time, face drawn in.  Because of that surgery she had complications throughout the rest of her life.  The weight was put back on.  The Type 2 Diabetes would rule her life.  Her organs started to fail and dialysis was needed. And the rest is history.

So, watching my Ma take on every fad diet, diet pill, purchase health gizmos, have dangerous procedures – all in the quest to be skinny and look a certain way (when that was probably not an achievable goal for a number of factors) – it cemented in my mind that I never wanted to live like that nor find myself at the end of my life in that condition (the last three years of her life were sedentary, sleeping in a recliner or hospital bed, in and out of the hospital where they would pump her full of medicine to strip her body of the excess fluids it would accumulate).

While in NYC my average weight was 150, my height 5 ft 7 in.  I had curves.  I was fine with that. When Ma passed I felt the need to come home, be close to Dad and to figure out a life missing someone so important to me.  Welcome to WV, land of deep-fried everything.  I worked four jobs in 2010.  Three restaurant, one office.  My life was hectic and filled with eating on the fly and Red Bull.  My weight climbed to 160. I was me, with a little extra.  I was fine with that.  Then in 2012 my Dad had open heart surgery and would be in a coma for nine days during which he went into cardiac arrest, lost oxygen and suffered hypoxia.  For almost a year after I would stay close to Daddy as he made his way from one nursing home to a second and finally home.  His lifestyle after Ma passed was one filled with meals from the freezer, sweets and not getting a handle of his blood sugar.  Fortunately, he is still around and is still quite the character.  I am so thankful for that. 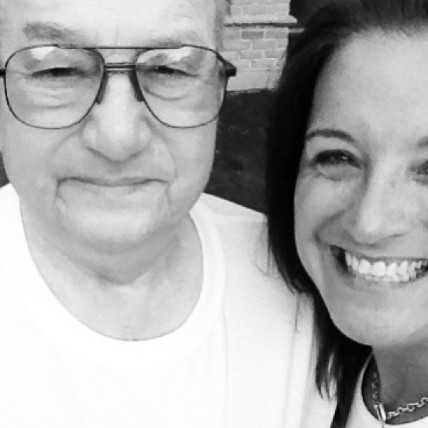 Now, I love to run, I love to eat healthy (sometimes I like a good chocolate ice cream cone) and I love to be the best version of me.  From the time I moved home to WV until my surgery on April 13, I packed on a whalloping 34 pounds. I have run various races (the two I am most proud of are my Half Marathons).  But I have come to the realization that if I am not careful, I will end up battling Type 2 for the rest of my life and I have seen the consequences THAT can have on an individual.  I want to be able to travel, to run, to adventure and to enjoy life as I get older.  To be able to do that, I must lay the groundwork now.  With my recent health setback, complications and subsequent surgery – I found myself at an undesirable weight and hating the world.  That was my springboard moment – sitting on the couch in the sunroom during my recovery – I made a promise to myself that things would change and it would be better and I would not end up like Ma.

As of this morning (June 10) I am down exactly 18 pounds from when I returned home from surgery.  I am currently registered for one race a month through October:

And I am tossing around the idea of rerunning the Marhsall University Half Marathon (in a much healthier place than 2015).  While I was running last night, with horrible pace times and wanting to die from the heat, I realized that for the first time in a very LONG time, I felt “good”.  My frame of mind was right, my stride felt good, I just felt good.  That is a wonderful foundation to build upon.  I have a ton of hard work ahead of me but I have some amazing plans for the summer that will keep me busy and healthy.

Oh yeah, that Bridge Day 5k – first 5k across the bridge EVER and I will be a part of it.  Be prepared for the pre and post blogs on that one.

Life is what you make of it – if you feel that your life is crappy, only you can change that.