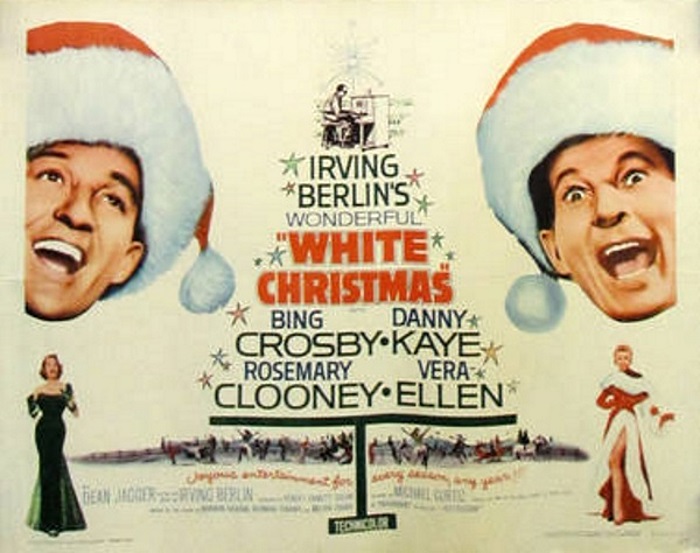 IMDb synopsis: A successful song-and-dance team become romantically involved with a sister act and team up to save the failing Vermont inn of their former commanding general.

Every year as I put up and decorate the tree, it is essential that this movie is the first played. I love it. I can recite it and my favorite song is Counting My Blessings.

Hands down, my favorite Christmas movie!

Third of three films to feature Bing Crosby singing “White Christmas”. The other two are Holiday Inn (1942) and Blue Skies (1946).

White Christmas (1954) was the first film photographed in Paramount’s widescreen VistaVision process. A radical departure from the other widescreen formats of the era, VistaVision did not extend the width of the screen as much as it raised the height, which produced a significantly clearer image. Not surprisingly, the hundred or so films shot in VistaVision (notably High Society [1956], North by Northwest [1959] and White Christmas) have provided the most vivid clarity when transferred to high definition home video formats, as VistaVision applied the same principle and was, in effect, the first experiment in high definition.

On Christmas Eve, 1944, in Europe during WWII, two U.S. Army soldiers, Captain Bob Wallace (Bing Crosby) and Private Phil Davis (Danny Kaye), give a show to the troops of the 151st Division in a forward area with Bob singing “White Christmas”. The mood is sombre: their beloved C.O., Major General Thomas F. Waverly (Dean Jagger), is being relieved of command. He arrives for the end of the show and delivers an emotional farewell. The men give him a rousing send-off (“The Old Man”).

After the war, over the next 10 years, Wallace and Davis become a successful duo show. They mount their newest hit musical entitled ‘Playing Around’ on the same day they receive a letter from “Freckle-Faced Haynes, the dog-faced boy,” their mess sergeant from the war, asking them to look at an act which his two sisters are doing.

The photo that Vera-Ellen shows to Bing Crosby and Danny Kaye of her brother, Bennie, is actually a photo of Carl ‘Alfalfa’ Switzer, known for his role as in Our Gang. Switzer also appeared in another classic Christmas film, It’s a Wonderful Life (1946), as Donna Reed’s suitor, who opens up the gym floor during the high school dance, sending everyone falling into the swimming pool underneath.

When they go to the club to audition the act (“Sisters”), Phil notices that Bob is smitten with Betty Haynes (Rosemary Clooney), while Phil has eyes for her sister, Judy (Vera-Ellen). Following their number, Betty and Judy join Bob and Phil at their table, and believing he may have found the right woman for Bob, Phil brings Judy on to the dance floor so that Bob and Betty can get to know each other better. Phil and Judy hit it off (“The Best Things Happen While You’re Dancing”).

Vera-Ellen’s singing voice was dubbed. Numerous sources mistakenly assume Rosemary Clooney sang Vera-Ellen’ s part in “Sisters” thus dueting with herself, but Trudy Stevens (who was Trudy Stabile at the time) was Vera-Ellen’s voice double in all of her songs, namely “Sisters”, “Snow” and the “White Christmas” finale. Some Gloria Wood articles and album liner notes have mentioned through the years that she was the one who sang for Vera-Ellen, but although she was the initial choice for the job, Rosemary Clooney intervened to have her friend, Trudy Stevens, sing the role instead. Vera’s own singing voice is heard ever very briefly singing in the “arrival in Pine Tree” scene at the railroad station where the quartet reprises – live – the opening lines of “Snow”

Judy tells Phil that she and her sister are headed for the Columbia Inn in Pine Tree, Vermont, where they are booked to perform over the holidays. Officers arrive to arrest the girls for skipping out while owing rent to their landlord. Phil gives the sisters his and Bob’s sleeping-room accommodations to run and board the train to Vermont. Meanwhile, he and Bob stall for time to allow them get away. (reprise Sisters)

According to Rosemary Clooney, Bing Crosby and Danny Kaye’s “Sisters” performance was not originally in the script. They were clowning around on the set, and director Michael Curtiz thought it was so funny that he decided to film it. In the scene, Crosby’s laughs are genuine and unscripted, as he was unable to hold a straight face due to Kaye’s comedic dancing. Clooney said the filmmakers had a better take where Crosby didn’t laugh, but when they ran them both, people liked the laughing version better.

When the train arrives in Pine Tree, the weather is so unseasonably warm, chances of snow appear dim. Bob and Phil discover that the inn is run by their former commanding officer, General Waverly. Waverly has invested all of his savings and pension into the lodge, which is in danger of failing because of the lack of snow and consequent lack of guests. Deciding to help out and bring business up to the inn, Bob and Phil bring their entire cast and crew of their new musical and add in Betty and Judy where they can.

At the same time, Bob and Betty’s relationship starts to bloom (“Count Your Blessings”) and they begin to spend a good deal of time together. Meanwhile, Bob discovers the General’s rejected attempt at rejoining the army, and decides to prove to the General that he isn’t forgotten.

The Vermont inn is the remodeled Connecticut inn set from Bing Crosby’s earlier movie Holiday Inn (1942). In White Christmas, the recycled hotel set is very gray, and appears not to have been repainted in new colors. Since Holiday Inn was a black & white film, the sets were probably originally painted in grayscale, as color palette schemes would have been a waste of resources in 1942.

When Betty and Bob are at the bar for the “sandwich” scene, getting a midnight snack, Crosby says the menu is not the same as “Toots Shor’s”. Toots Shor’s was a real restaurant at 51 W. 51st Street in New York. It was somewhat of a hangout for show business personalities.

Bob calls Ed Harrison (Johnny Grant), an old army buddy, now the host of a successful TV variety show. Bob tells Ed that he wants to make a televised pitch to all the men formerly under the command of the General, asking them to come to the inn on Christmas Eve as a surprise. In response, Harrison suggests they go all out and put the show on national television, playing up the whole “schmaltz” angle of the situation and generating lots of free advertising for Wallace and Davis in the process. What Bob doesn’t know is that nosy housekeeper Emma Allen (Mary Wickes) has been listening in to the phone conversation on the extension but has only heard about the whole schmaltz suggestion, hanging up before Bob rejects the idea.

Audiences have long been struck by dancer John Brascia’s curious lack of integration into the film’s plot despite his partnering of Vera-Ellen on three of the more strenuous dance numbers (“Abraham,” “Mandy” and “Choreography”). The film was heavily into pre-production when an injury forced Donald O’Connor to withdraw from the role of Phil Davis, the initial idea having been to re-team O’Connor and Vera-Ellen following their memorable pairing in the previous year’s Call Me Madam (1953). Danny Kaye was quickly drafted into the role, and while he was able to hold his own in several of the partnering routines (notably “The Best Things Happen While You’re Dancing”), he did not possess the technique for the remainder of them. As Robert Alton had already choreographed the film and was due to move on to another project, Brascia, a fine ensemble dancer, was called in to avoid the cost of re-staging. This resulted in Danny Kaye’s noticeable lack of presence in the musical numbers, so Alton hastily added the comedian into “Choreography,” doing a flamboyant parody of Martha Graham that many critics and audiences considered ill-advised. Brascia later partnered Cyd Charisse in the memorable “Frankie and Johnny” ballet in Meet Me in Las Vegas (1956)

Mistakenly believing that her beloved boss will be presented as a pitiable figure on a prime-time coast to coast broadcast, Emma reveals what she heard to a shocked Betty who is originally loath to believe Bob would pull such a stunt for his own gain, but mistakenly comes to believe he would indeed stoop to such depths when Phil asks her if he made the call to Ed. The misunderstanding causes a now-disillusioned Betty to grow suddenly cold toward a baffled Bob. Unaware of the real reason for her sudden change of behavior, Judy becomes convinced that Betty, ever-protective of her little sister, will never take on a serious relationship until Judy is engaged or married. She pressures an extremely reluctant Phil to announce a phony engagement, but the plan backfires when Betty abruptly departs for New York City, having received a job offer.

Distraught, Phil and Judy reveal to Bob that the engagement announcement was phony, and Bob, still unaware of the real reason behind Betty’s annoyance, heads to New York to explain. Bob goes to see Betty’s new act (“Love, You Didn’t Do Right by Me”) and reveals the truth about the engagement, but is called away by Ed Harrison before he can find out what is really bothering her. The sight of Ed pushes Betty who was nearly forgiving Bob, back down. Meanwhile, back at the Inn, Phil fakes an injury to distract Waverly so he won’t see the broadcast or Bob’s announcement.

On the broadcast, Bob proceeds to ask the veterans of the 151st Division to come to Pine Tree, Vermont, on Christmas Eve (“What Can You Do with a General”). When Betty is backstage between performances, she catches Bob’s pitch on a television set and realizes she was mistaken. She returns to Pine Tree just in time for the show on Christmas Eve. Emma convinces Gen. Waverly that all his suits were sent to the cleaners and suggests he wear his old uniform to the opening of the show. Initially reluctant, he agrees. When the General enters the lodge where the show is to take place, he is greeted by his former division, who sing a rousing chorus of “The Old Man.”

When General Waverly is preparing to “inspect the troops”, the bugler sounds off with “Ruffles and Flourishes.” This is traditionally played to announce the appearance of a flag officer (generals or admirals); the number of times it is repeated corresponds to the number of stars on the officer’s collar. The bugler plays it twice, signifying General Waverly as a major general (two stars).

Just as the following number (“Gee, I Wish I Was Back in the Army”) ends, he is notified that snow is finally falling.

For the song “Gee, I Wish I Was Back In The Army”, there is the lyric, “Jolson, Hope And Benny all for free”. This is a reference to three wartime entertainers: Al Jolson, Bob Hope and Jack Benny. The original words were “Crosby, Hope and Jolson all for free”, but the lyric was changed because with Bing Crosby in the cast the original lyric would break the fourth wall.

In the finale scene, Bob and Betty declare their love for one another, as do Phil and Judy. The background of the set is removed to show the snow falling, everyone raises a glass, and toasts, “May your days be merry and bright; and may all your Christmases be white.” Bob then performs the last musical number before the final fade-out (a reprise of “White Christmas”).

The snow used at the end of the film is actually asbestos.