Roy George McCombie, my great Grandfather. This picture was posted by a cousin on Ancestry. He called him “Pop”.  I have not found any stories about Pop that I could relay here.  My research was, for the most part, easily acquired through online searches and some in-person Cambria County Library reading.

Using his marriage license, death certificate and obituary, I have confirmed his birth date as 12 May 1888.  He was born in Carrolltown in Cambria County, Pennsylvania to Charles Chilton McCombie and Mary Ann (Gray) McCombie.  Pennsylvania started requiring birth certificates in 1893 after a law came into effect mandating the reporting of births.  I could not find a “delayed birth certificate” which is sometimes required for people for employment purposes because they had no official record at the actual time of their birth.  An extensive search of archived newspapers did not turn up a birth announcement.  I will keep searching though.  I hope to make a trip to the PA State Archives and Cambria County Historical Society next spring for research purposes.  Hopefully it will turn up in a search while there.

On the 1900 Census for Carroll Township, Cambria County, PA – we find twelve year old Roy living with his parents.  His date of birth is correctly noted as 1888. He is able to read, write and speak Engligh.

Ten years later, for the 1910 census, we find Roy McCombie, 21 years old, still living with his parents in Carroll Township, Cambria County, Pennsylvania.  He is currently employed as a Motorman in the Coal Industry. 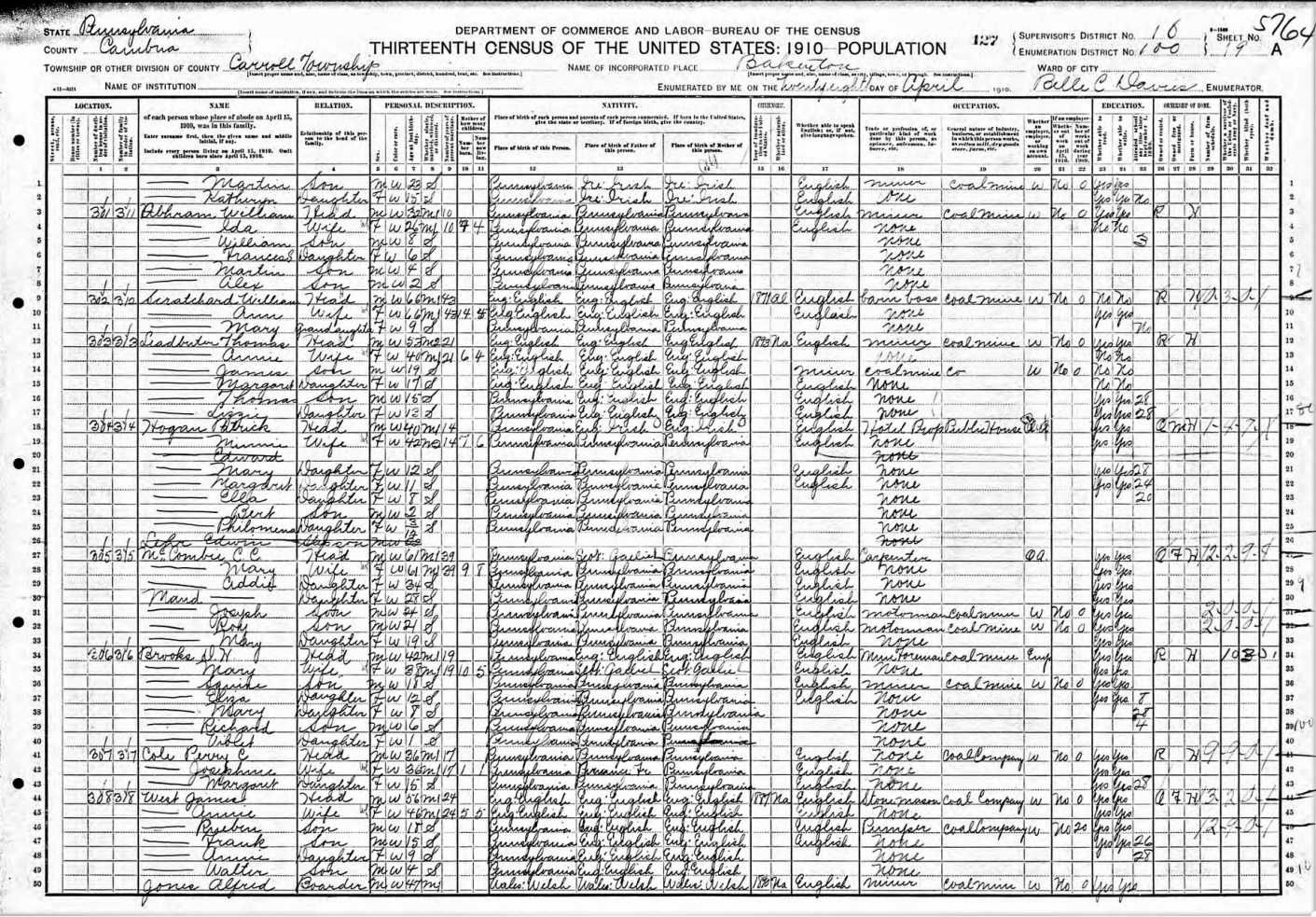 On November 24, 1912, he marries Margaret Logan.  She is the daughter of James and Mary Ann Logan.  He is twenty four years old, she is nineteen.  Her mother had to give consent for her to marry.  They both live in Bakerton, Cambria County, Pennsylvania.  They were married in the Catholic Church in Carrolltown by Rev Herman Schorer.  This is recorded in Cambria County, Page 324 of the 1912 Applications for Marriage Licenses.  I will write a separate blog for Mary Logan.
The marriage license below is searchable on the Ancestry website.  it notes the source as “Ancestry.com. Pennsylvania, Marriages, 1852-1968 [database on-line]. Lehi, UT, USA: Ancestry.com Operations, Inc., 2016.Original data: Marriage Records. Pennsylvania Marriages. Various County Register of Wills Offices, Pennsylvania.Source Description-This collection consists of county marriage records from various counties in Pennsylvania.“ 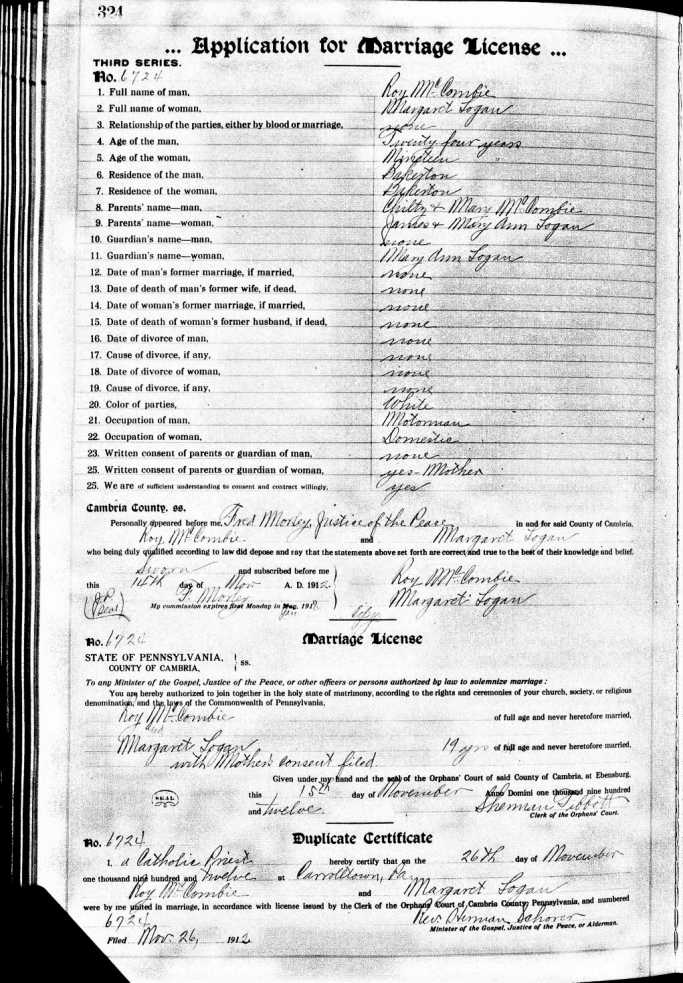 In 1920, we find Roy McCombie on the Census living on Spangler Road in Bakerton, Cambria County, Pennsylvania.  He is incorrectly noted as 28 years old.  He is living with his wife Margaret and two of his children: Edwin and Marguerite (my Grandmother).  He is a laborer in the coal mines.  They rent their home. 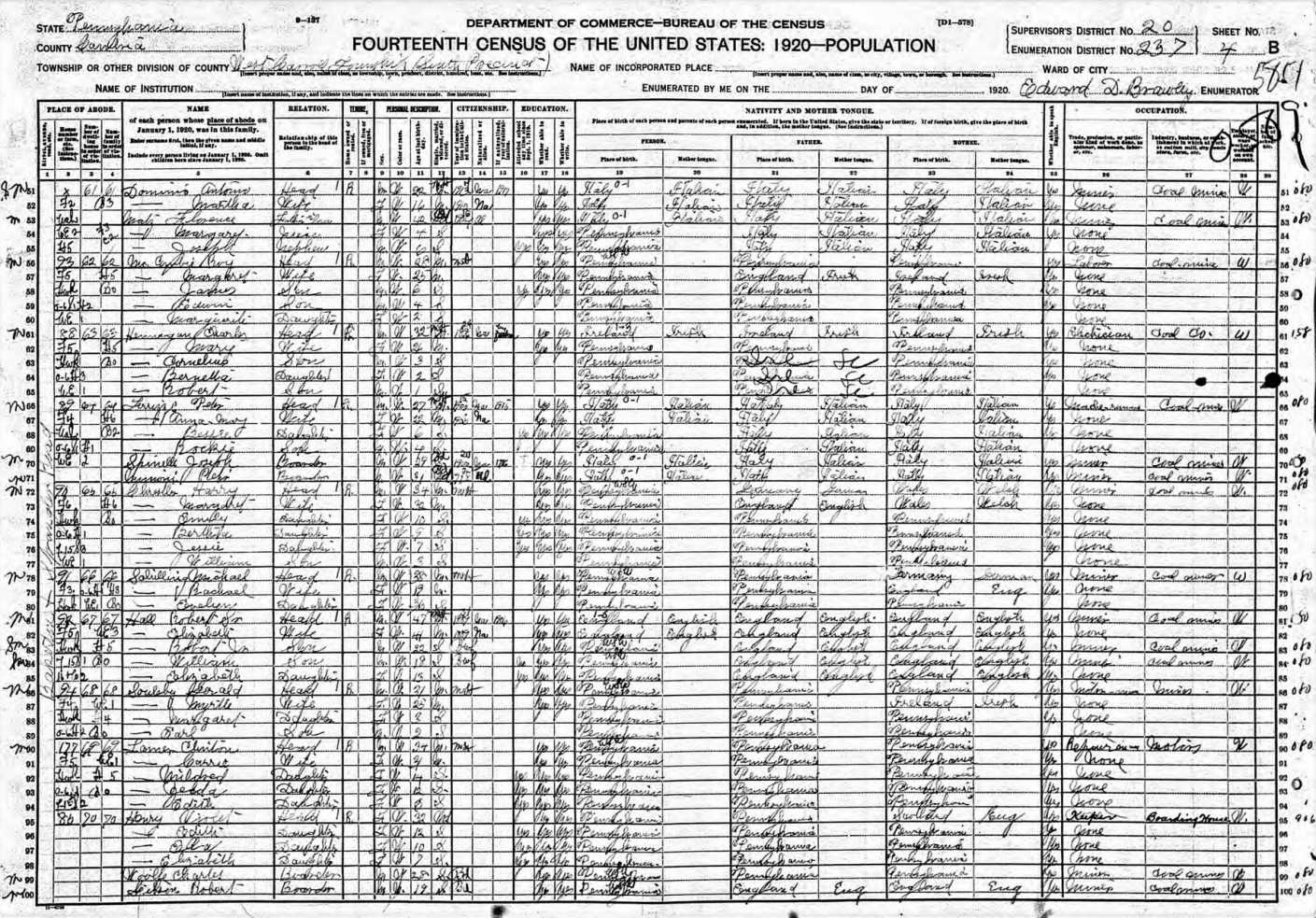 On the 1930 Census, Roy McCombie is incorrectly noted as 30 years old. He is still married to Margaret, having married her at 21 years old (wrong data there).  He is a laborer in the coal mines.  They rent a home along the highway.  It notes he never attended school.  This is incorrect, according to the next census, he attended through 5th grade. 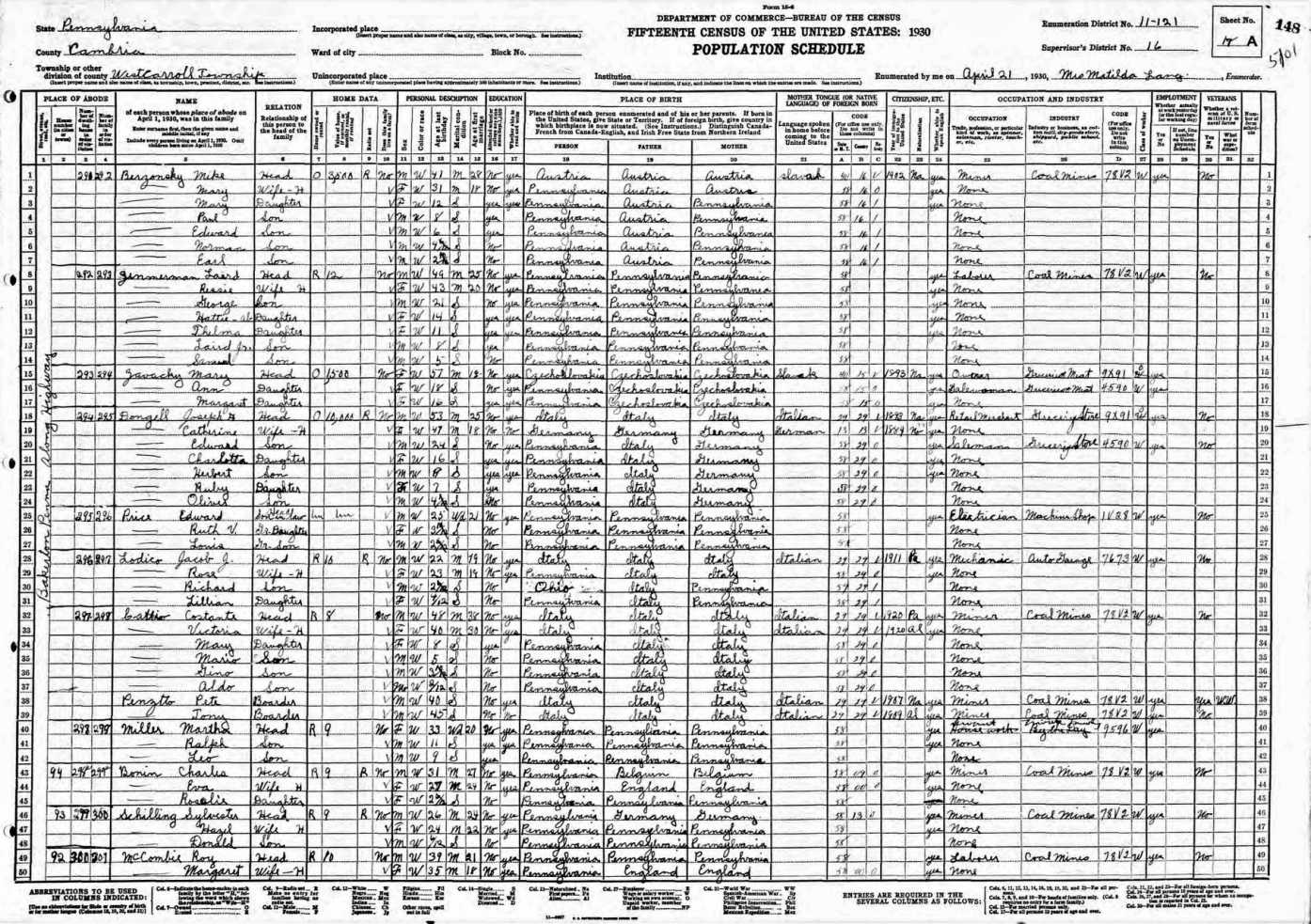 The final Census available for Roy is the 1940 (1950 and later census data is not currently available to the general public.  In three years, the 1950 Census pages will be released).  His age is once again noted wrong, this time as 50 years old.  He is still married to Margaret and they have been living in the same house since 1935.  He now works as a pumper.  They live in West Carroll, Cambria County, Pennsylvania. 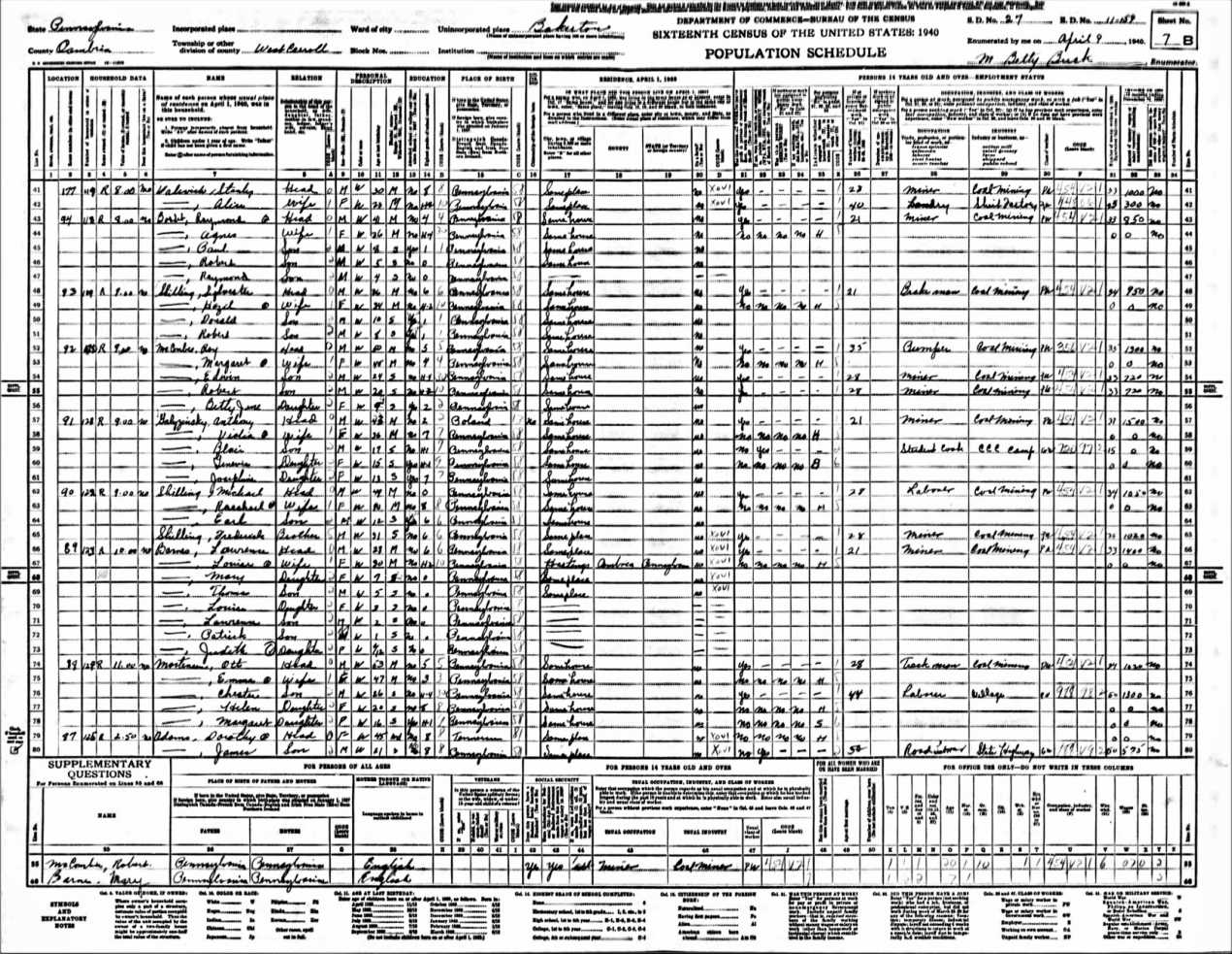 Roy G McCombie passed away on Nov 1, 1967, one year and two weeks before I was born.  At that time he was living in Elmora, Cambria County, Pennsylvania.  He passed away at the Miner’s Hospital of North Cambria.  He was a retired Coal Miner.  It notes he was born in Carrolltown, PA, USA.  His mother’s maiden name was Mary Gray.  His father was CC McCombie.  His wife was Margaret Logan and is the person who informed the coroner of his specific details for purposes of this record.  He died of a Coronary Occlusion.  He was 79 years old. 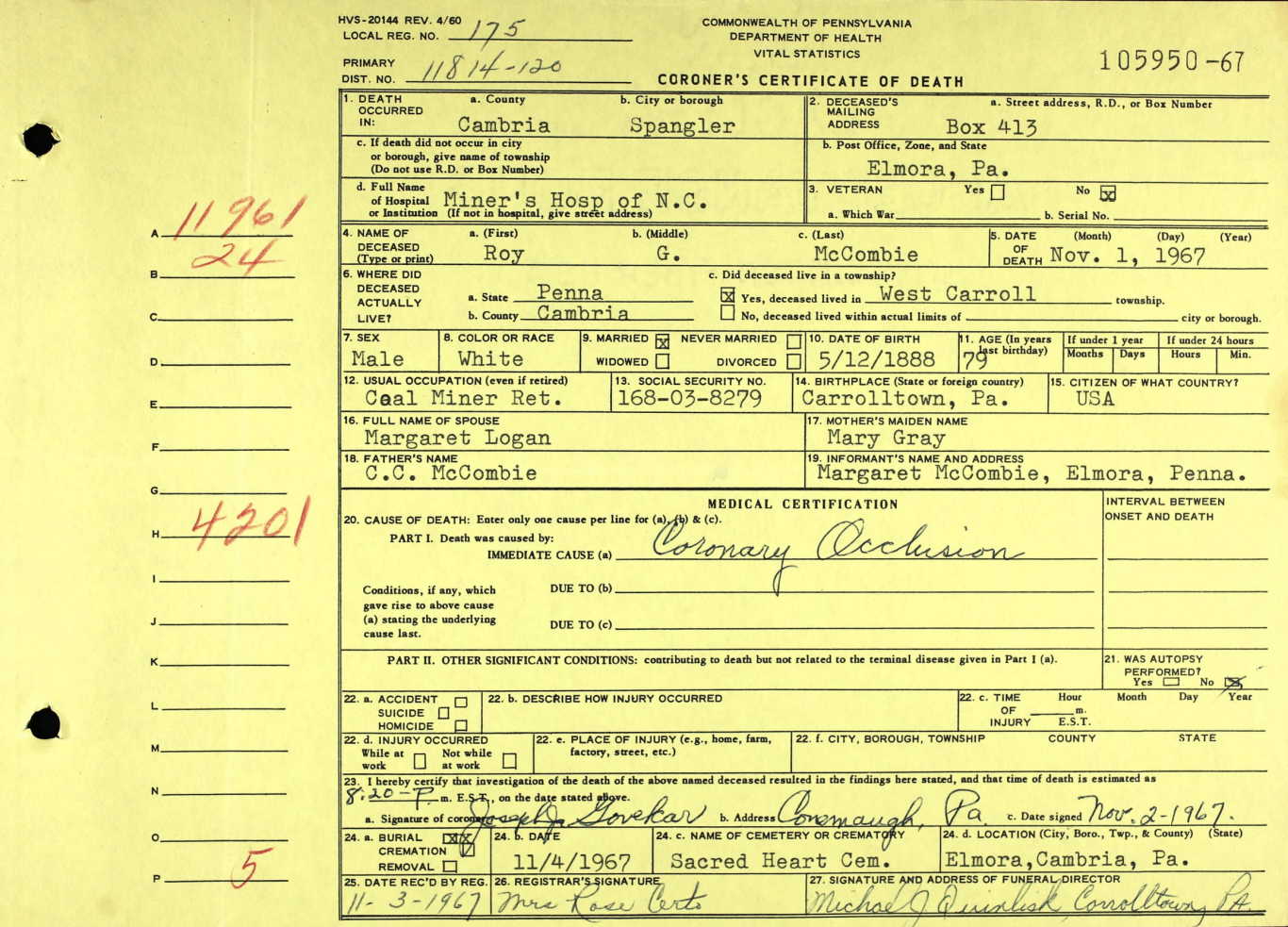 According to his obituary: Roy G McCombie was 79, from Elmora and died Nov 1, 1967 at Miners Hospital in Spangler.  He was preceded in death by his son, James, who died in a car accident in 1935.  He was survived by his widow, Margaret and the following children: Edwin, Marguerite, Robert and Betty Jean (along with 12 grandchildren and 4 great-grandchildren).  He was a member of Local 1269 UMWA, Elmora.  He attended Sacred Heart Catholic Church in Elmora where he was a member of the Holy Name Society.
His wake was held at the Fred J Stevens Funeral Home in Carrolltown.  A Funeral Mass was heald at 9AM on that Saturday morning at Sacred Heart Church, Rev Joseph Kiniry officiated.  His internment was in the same church’s cemetery.

Even though every record of note that I found says he was born in 1888, his tombstone says 1889.

This research for my great-Grandfather was very cut and dry.  I did not find any newspaper clippings of note for him.  His father, on the other hand, had a plethora of newspaper data.  It will be fun to put his information into a coherent blog.  I will continue to sift through the years in hopes of finding additional tidbits.
I hope you enjoyed the read.
Ciao!