When I was a kid Dad took me to see the Harlem Globetrotters.  He was mystified by how they could move so seamlessly on the court.  In one of the old program binders that Dad kept for the various OHHS games he attended, I found two programs that were a league above the high school level.  One is the 1965 program of the Harlem Globetrotters and the second is the Harlem Magicians.  When I saw the second I was confused.  I had never heard of the Magicians before.  But here was a program and at some point in the early to mid 1960s my Dad was able to go see these professionals play and as a kid he (I am positive) was immediately hooked on the amazing dribbling speed of Marques Haynes.

According to Wikipedia:  Harlem Magicians was a basketball enterprise founded in 1953 by Lon Varnell through his Varnell Enterprises, that was similar in fashion and activities to the basketball entertainment program the Harlem Globetrotters. The full name of the barnstorming basketball team was The Fabulous Harlem Magicians with the main star attraction of the team being Marques Haynes. Haynes had been a member of the Globetrotters, but had left the team due to a contract dispute to join the Magicians. Other famous players in the team were Goose Tatum, Bob “Ergie” Erickson (who once stole the ball from Haynes four times in one game), and Ron Cavenall. Dempsey Hovland, founder of 20th Century Booking Agency and himself owner of several barnstorming teams was recruited to book the Harlem Magicians’ games.  In late 1961, Abe Saperstein, founder and owner of the Harlem Globetrotters opened a lawsuit against Lon Varnell for alleged violation of Harlem Globetrotters’ registered trademarks, “Harlem Globetrotters” and “Magicians of Basketball” by promoting a basketball team known as the “Harlem Magicians”. In 1964, the parties settled the litigation by entering a consent decree approved by the District Court for the Southern District of New York.

In trying to determine the year Dad saw them, I refer to page page eight, underneath the story of their origins is a Won and Lost Record.  It dates through the 1957-58 season.  So I would assume the date would be later than that.  I found a newspaper clipping from December 1959 where they played in Fayetteville.  I would be willing to bet that was the game Dad saw. 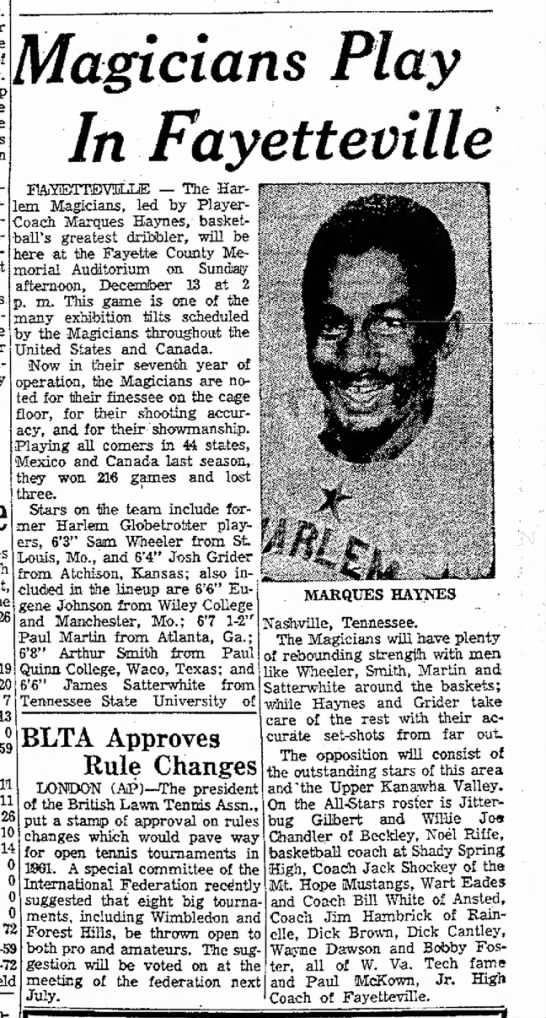 I also found a Jan 1958 clipping in a Beckley Newspaper but that would have been the last year noted in the Win/Loss records in the program. Whichever year it was that Dad was able to see these legends, I am sure that he thoroughly enjoyed every moment they were on the court.  I can only imagine the kid-aged Dad, eyes wide open, watching…

A tribute to Marques Haynes can be seen here:

The lawsuit the Globetrotters brought against the Magicians can be read HERE.

A firsthand account of seeing the Harlem Magicians in Elnora, IN can be read HERE.

Below is a scan of the 12-page program that I found in Dad’s binder of sports.

“Juggling Joe” Taylor was a professional juggler, I found an interview with him HERE.