All the spoilers all the time.  You have been warned! (Is this warning really necessary after four decades?!?)

Alien was released 40 years ago on the 22nd. At first I was confused because I felt it came out while I was in High School but that was one of the sequels.  The original was released in 1979. So in honor of its anniversary, I thought I would give it a gander.

Holy crap, the 20th Century logo came up with music that sounded like it was from a million years ago.  This is how non-ramped-up movie audio sounded four decades ago?? Wow.

In the opening shot of The Nostromo it gives vehicle details like crew: 7, cargo: refinery processing 20M tons of mineral ore, course: returning to earth.  Like what was that mineral ore for?  Are we still using fossil fuel in the future?  Is that rocket ship up there on diesel? Thought: I would like to see actual NASA spaceship panels from 40 years ago compared to what they look like in modern times.  I feel like looking at the panels on this ship is like comparing Atari to Wii.

They are traveling while in deep space sleep.  There are no IVs or anything. Or like pee tubes.  And they just wake up a little drowsy but good to go. Forty year ago me would have been ok with it. 2019 me is questioning the realism.

Funny side note:  I bought one of those Lucky Birds like the one on their table in the opening scenes – just two weeks ago!  It pissed me off because I cannot get it to bob up and down to drink the water like it is supposed to.  Maybe its tail feather is too short?  But I digress…  (Before I even finished typing this Husband walks in and fixes it.)

They have rainbow patches for this mission!  You can buy one on Amazon.  I know that you can because I just did! Five bucks. I would love to have the actual shirt with the patch on it!  That might be a little much though… 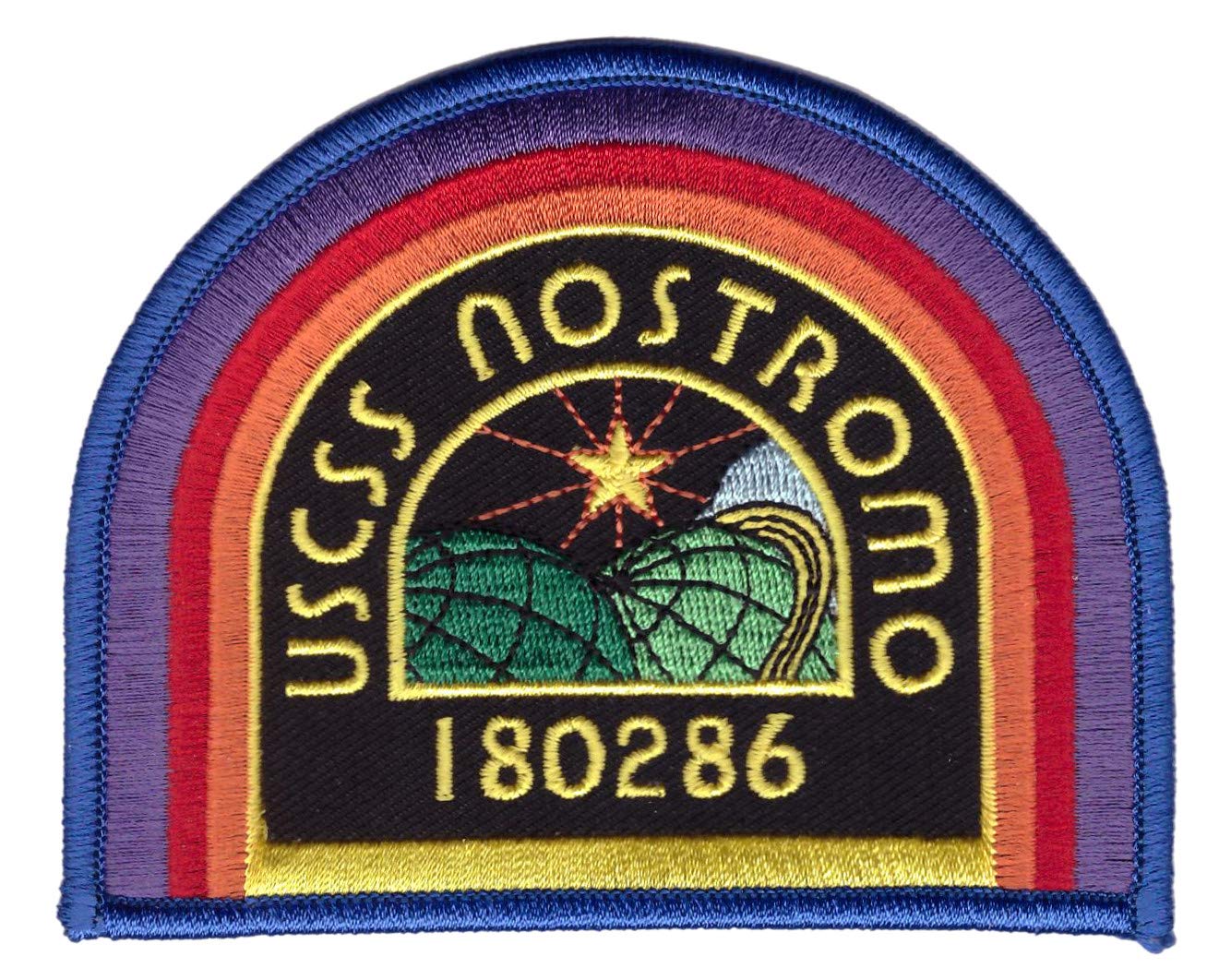 They come in for the slowest landing of all time, land uneven on a rock and then their whole ship is about to fall apart. I know, I know… it is necessary to further the story. But damn, they made it through space and mining space ore and a little pebble up and kills their ship?  2019 Chelle taking issue.  What I am not taking issue with – holy hell Sigourney Weaver looks amazing in this movie!

The three crew members go in to explore the ship that sent out the distress signal and you know shit is just going to go sideways. It is the sound, it is the tune that plays intermittently, it is the wide-eyed expressions.  They have given us the bait, we have taken it, we are prepared to be scared! Movies from that era knew how to build suspense with just sound/music.  All without CGI. I give it to the director Ridley Scott, the long, wide pans of the camera make the movie.

The distress signal in binary code was not a distress signal! It was a warning!  GET OUT PEOPLE! GET! OUT!  They are out of range for Sigourney to alert them and now they have found eggs on the alien spaceship!  GET OUT!!!  But no.  Let’s touch the random scary looking egg.  “Wait a minute, there’s movement.”  Once again, GET DA FREAK OUT!  But no. And then it’s on like Donkey Kong… Ripley knew it was a warning being sent and said as much. She knew the hatch should not be open because of potential contamination.  And said as much.  Did anyone listen?  Of course not.  (In my head “Sometimes It’s Hard To Be A Woman” plays.)

Now we see the alien in all of its glory attached to a face. They try to remove it and its acid blood pours out and burns through several levels of the ship. They shoulda listened to the woman.  Molecular acid for blood!  A defense mechanism.  Genius!  And when the creature finally falls off the crewmate’s face, did they listen to Sigourney and shoot the thing out a hatch?  Um, nope. Now it is out there and they have no clue where.  Sigourney tries to tell Dallas that there are things that need to be done before they lift off, repairs. Did he listen to her?  Again, no. She deserves to be the sole survivor of this soon to be debacle.

The famous dinner scene… Smoking cigs at the space dinner table.  And then the transformation!!  One of the best acted scenes in history.  Why best acted?  Because only the alien host knew what was about to happen.  Ridley Scott is a genius and made it a surprise for all of the other actors so he could capture their unexpected expressions.  The baby alien is adorbs!  But, seriously…shoulda listened to the woman.  Ash holds them back from injuring the alien and it gets away.  There’s something up with this Ash dude.  Now it is a search through a relatively dark vessel for the alien. I would think there would be more lights in the future, some LEDs. When the guy finds the shed alien skin I laugh – the set people cut up condoms to get that particular prop. And within a matter of a few minutes the baby grows into a full sized alien?  And he eats someone while the cat watches.  That is the least surprising thing to me, the cat just watching shit happen.

They send Dallas into the airshaft to flush out the alien.  It is dramatic. They are tracking it right to him but he cannot see it. He makes his way to a lower shaft. It is all dark.  Oh god Dallas move! And then he turns around and from the dark a great alien jump-em-out happens:

In this still the alien kinda reminds me of the no-eyed monster from Pan’s Labyrinth. I feel like this guy does not look like the aliens in later movies, I might be wrong.  He made me jump though.  Good for you not-little-after-five-minutes alien.  And after all that build up for Dallas to be a big character or maybe a turnaround hero – nada!  Skerrit is Skert. He is toast.  Alien toast.  We don’t even see his remains, he is so gone.

I am with Lambert – let’s just draw straws and the winners take the small craft and get the hell outta here. But do they? nope.  Another woman not listened to. And when she cracks the ship’s computer, Sigourney reads with utter despair: “Crew expendable.”  And then Ash goes full broken droid on her ass, all the while bleeding milk, trying to stuff a rolled up magazine down her throat.  That shit is terrifying and more real than the alien. Stuffing a full on Hustler magazine into the woman’s mouth, trying to silence her with porn!  But her fellow crew mates are there to the rescue! Go Parker!  And when Parker takes Ash’s head off with a baseball bat!  THAT is amazing!  Wait, where did that baseball bat come from?  They knock leather out in space?

When they reanimate Ash it is gross AF – he is speaking through a mouthful of clotted milk. When the arrogant head says he cannot lie about their chances but he can feel sorry for them – I was right with Parker on flamethrowing what was left of the droid into obliteration!  So now they have seven minutes to grab the necessities, meet back up and then blow the ship the hell up.  Nothing can go wrong, right? Sigourney trying to find Jones the Cat. Can’t leave him behind. Sigh. Really Sigourney?  Really?  Yeah, yeah, I know – I would do the same.  And while Lambert and Parker were gathering the necessary supplies, along came the alien and the rest is history.  That leaves us with Sigourney and Jones the I-Cant-Leave-Him-Behind-Although-It-Means-Dead-Crew-Mates-Cat.

Run Sigourney! RUUUUUNNNNN!  Time to set up the emergency destruction system!!! “failsafe” the very word makes me think it will fail and she is not safe!

The alien almost finds her and then she takes off! LEAVING JONES THE CAT!! It is too late to turn off self destruct, she goes back and even though the alien lurked around the cat cage, it left it unscathed…. or…. did it?  YOU HAVE ONE MINUTE TO ABANDON SHIP!  And she makes it just before detention.  But, seriously – what kind of nuclear craziness caused three massive atom splitting explosions on that ship and WHAT could they have possibly worried about to set up a self destruct of THAT magnitude???  Oh yeah, the alien.

She lets the cat out of the cage, gets into her panties and is about to crawl into the deep space sleep pod when what comes outta hiding?? A mother fucking alien!! YAS QUEEN YAS!  She quietly and quickly slides into a handy space suit, zips it up with her boobs all out there.  And just when the alien thinks it has her where she cannot get away: buckle into the space chair, force it out of its tight space with some sort of steam action and then open the hatch and purge the shit outta the ship… all while singing You Are My Lucky Star…..

Now she can crawl up with the cat in the deep space sleep chamber and hopefully get back to Earth… and onto a sequel.

I loved it. IMHO it held up well to be forty years old in 11 days.  Good job Ridley and Sigourney and Jones the Ima-Survive-No-Matter-How-Many-Humans-Die Cat!

Have you seen it?  Did you like it?  Let me know in the comments below!

IMDB Synopsis: After a space merchant vessel perceives an unknown transmission as a distress call, its landing on the source moon finds one of the crew attacked by a mysterious lifeform, and they soon realize that its life cycle has merely begun.