I love reading through all of the old Shirley Donnelly historical pieces.  There really are quite a few of them.  One of my all time favorites is “Seletyn Brothers, One Gone, Landmarks” – well, I am a little biased as John Chester was my Great Grandfather. 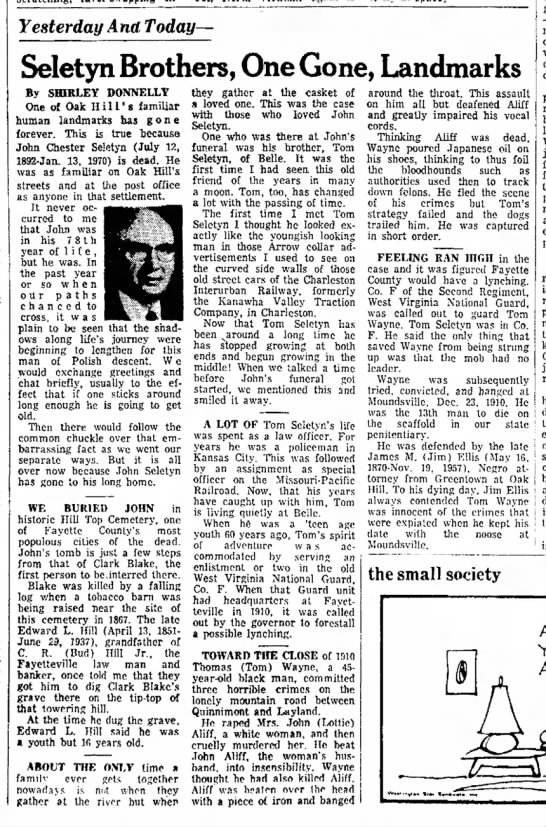 I really love the line: “In the past year or so when our paths chanced to cross, it was plain to be seen that the shadows along life’s journey were beginning to lengthen for this man of Polish descent.”  John Chester was born 12 July 1892 in Scranton, PA to Josef and Maria (both born in Poland).  I recently tried (unsuccessfully) to find John Chester’s grave at the old Hill Top Cemetery.  I plan to go back in the summer months and search again. This is a picture of John Chester (right) and my Grandpa Fred (Daddy’s Dad).

Mr. Donnelly also mentions John Chester’s brother Tom and Tom’s time as a police officer in Kansas.  Not too long ago I found a number of articles regarding the time Tom was stabbed by “One Eyed Joe Rodriguez” in a notorious resort in Coffeyville, Kansas owned by Grace Virgil.  In this series of newspaper clippings from the Coffeyville Daily Journal, you can follow Tom Seletyn, a newly inducted member of the local law enforcement community.  I am not sure what to make of the articles, as I do not know the actual story (either side).  Two officers act on a phoned in tip to what may (or may not) be a brothel selling alcohol against a bonedry ordinance (see below in green for some context on this ordinance).  I am left with a lot of questions.  A lot.

In February 1917 the legislature passed, and Governor Capper signed, the so-called “bone dry” bill. Under this new statute, it became unlawful for anyone “to keep or have in his possession, for personal use or otherwise,” any intoxicating liquors. The lone exception was communion wine. Anti-liquor forces across the country held Kansas up as an example for what should be done on a national scale. In 1919, the 18th Amendment to the U. S. Constitution made this prohibitionist dream a reality.

For 14 years national, state, and local law enforcement officials tried in vain to “dry up” the country. Most people believed that the “noble experiment” was a failure, and the amendment was repealed in 1933. Kansas, however, maintained its’ state-wide ban on alcohol until 1948. In that year, despite the efforts of the W.C.T.U. and other “drys,” voters rejected prohibition by a vote of 422,294 to 358,485. Kansas was once again placed under a local option law, similar to what had been abandoned nearly 70 years before.

And these are the articles… 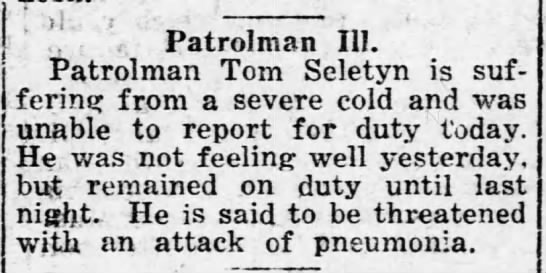 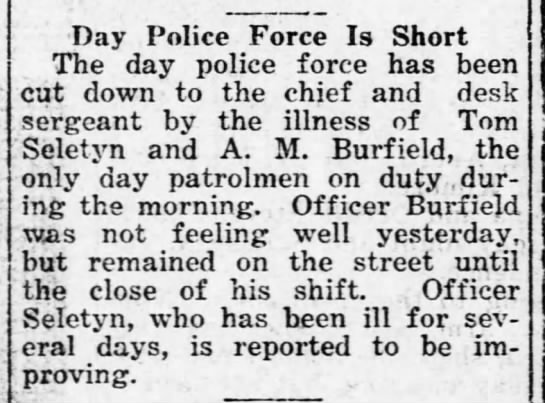 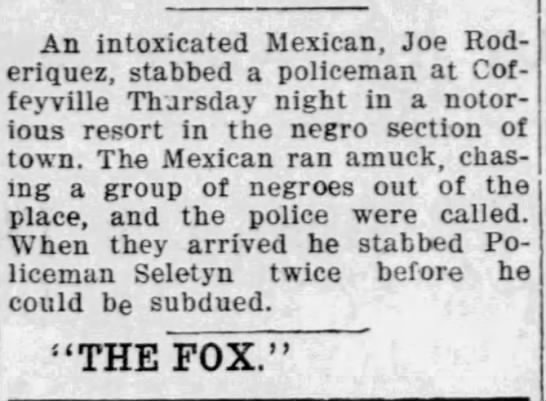 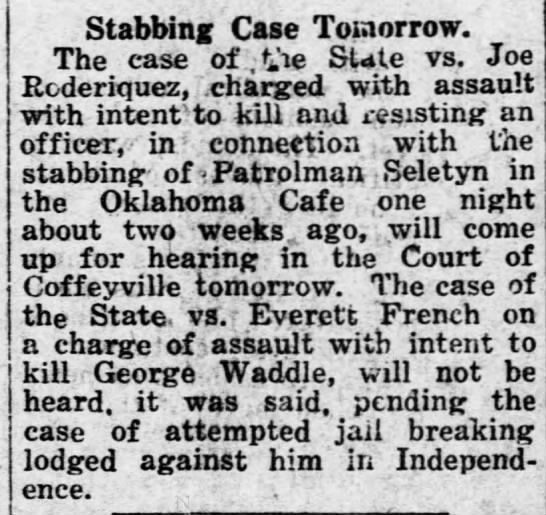 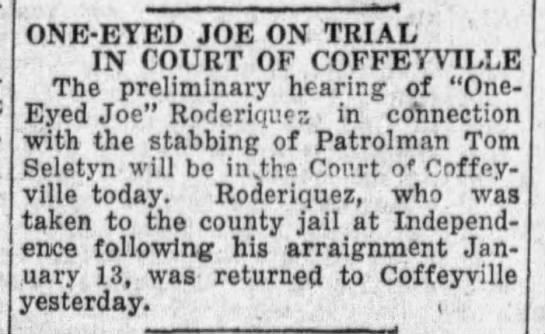 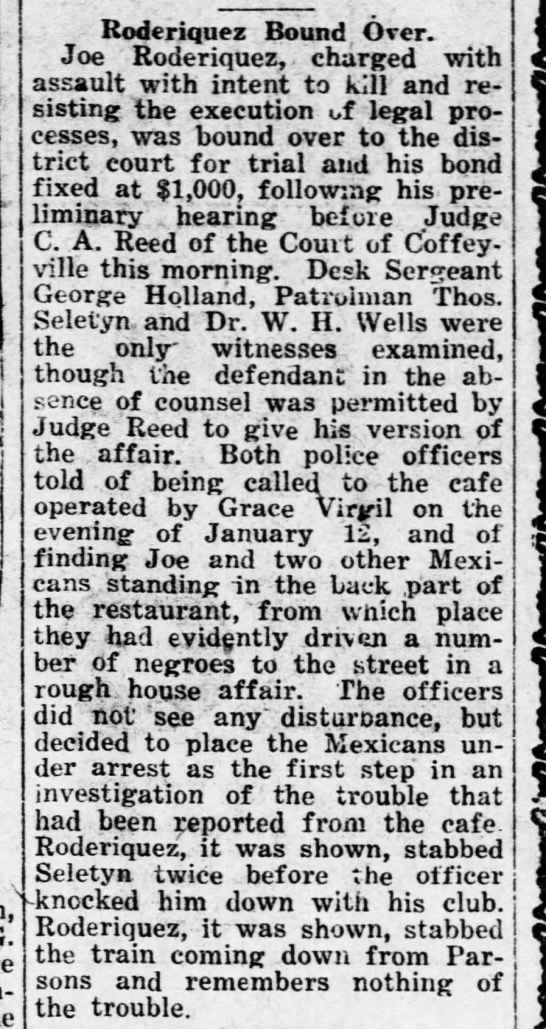 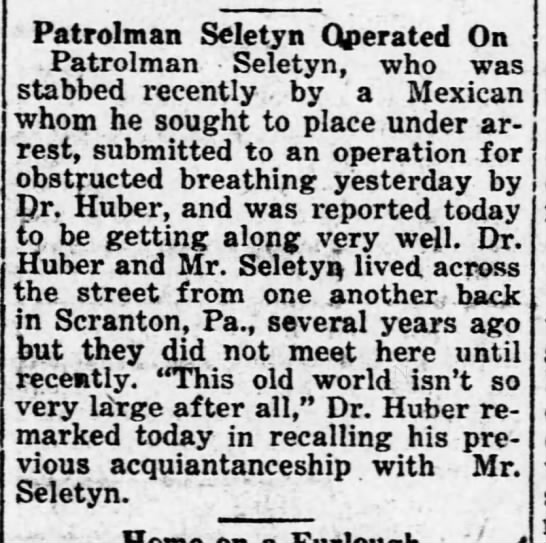 14 Jan 1922: This one irks me.  The woman who owned the business has to close it because of the actions of someone else. Poor Grace. 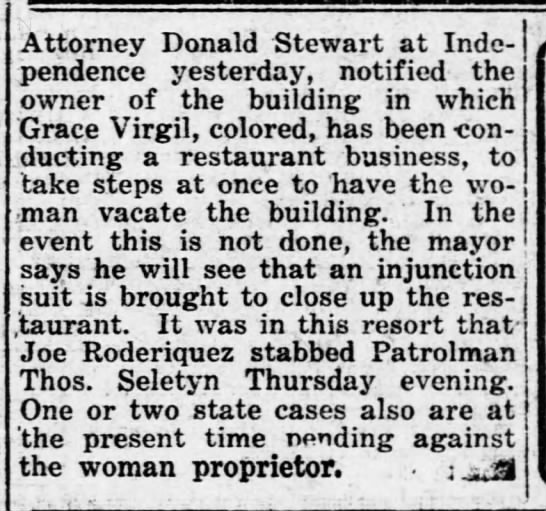 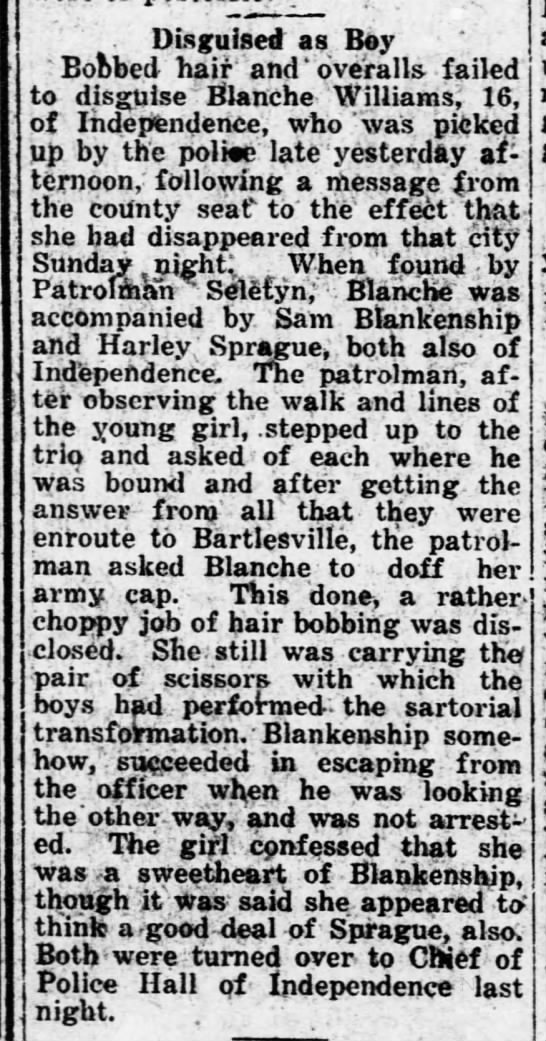 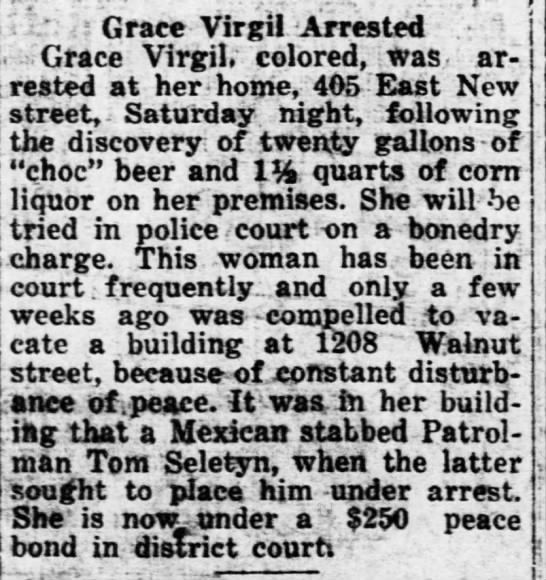 13 Mar 1922: Same day the above was reported, we get the longest run-on sentence in newspaper history: 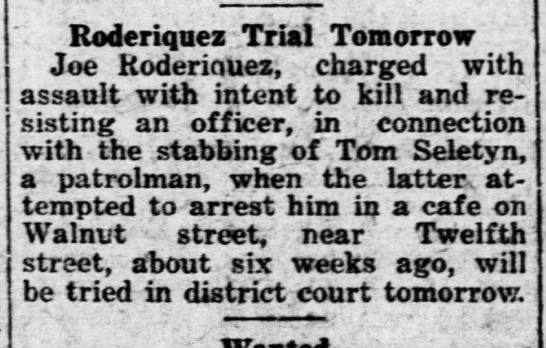 “the son of the southern republic is subject to fits” 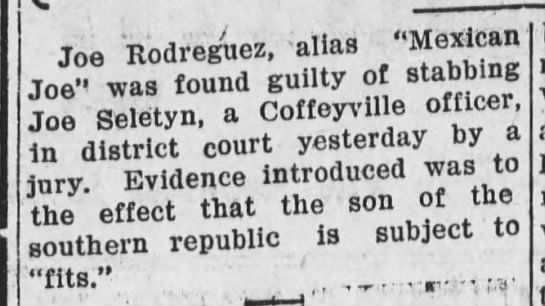 “While waiting for her to dress”, they arrested two people for violating a bonedry ordinance?

Waiting for her to dress?  Was she naked?  Was she just walking around naked?

The other people just walked up to the door with some whiskey in their pockets.  Wrong place, wrong time. 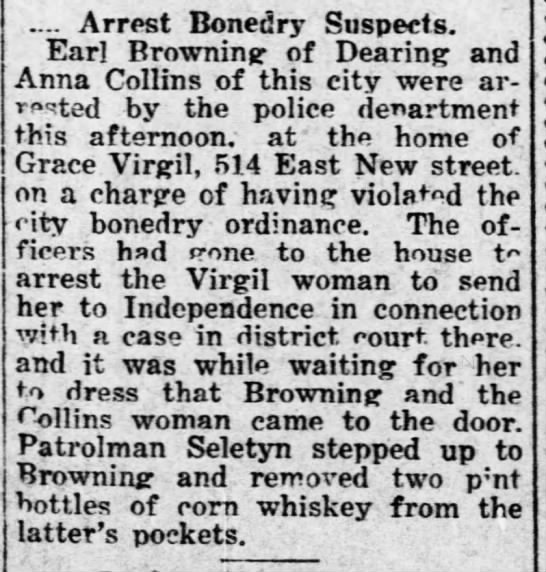 25 Apr 1922: Charles A Cubine (actor) arrested with cocaine in a flashlight. (He does NOT have an iMDB page lol) 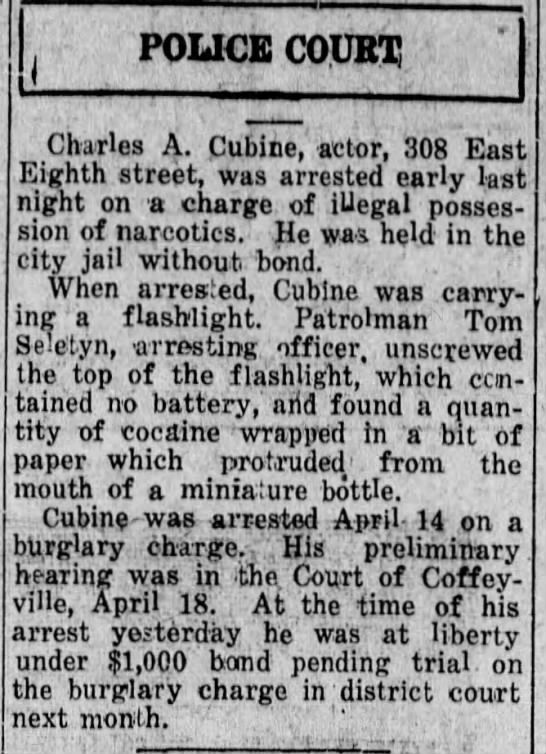 08 May 1922: And there was that time Tom suggested a member of his own family had stolen a car. 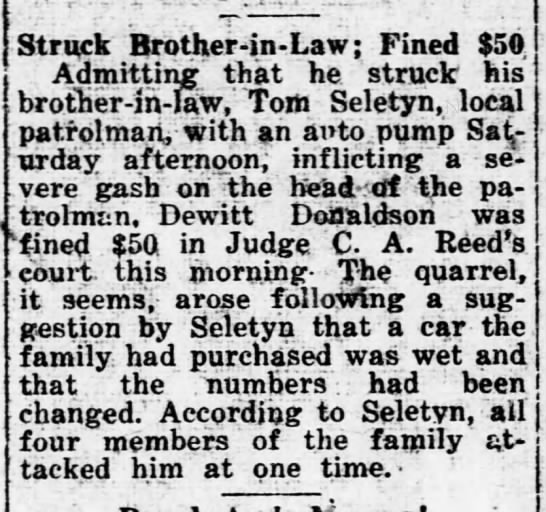 20 June 1922: Tom resigns from the department.  I found a couple of articles where he remained local and worked as an officer for the railroad.  So, he did not leave to return to the mines of WV or as a constabulary.  So what was the real reason he resigned?  He is touted as a great officer though.  I just find it interesting with this string of clippings – was he above or below the line? 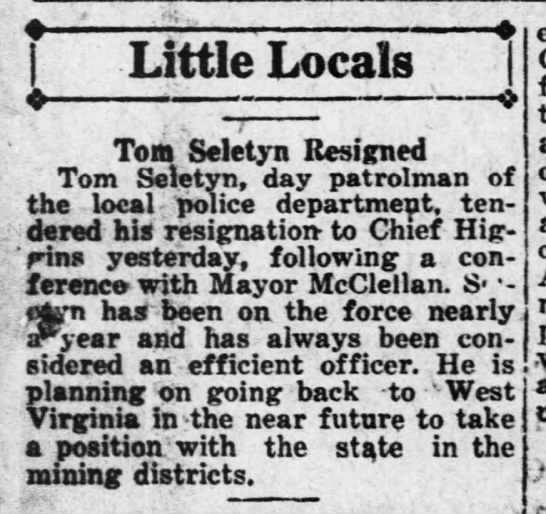 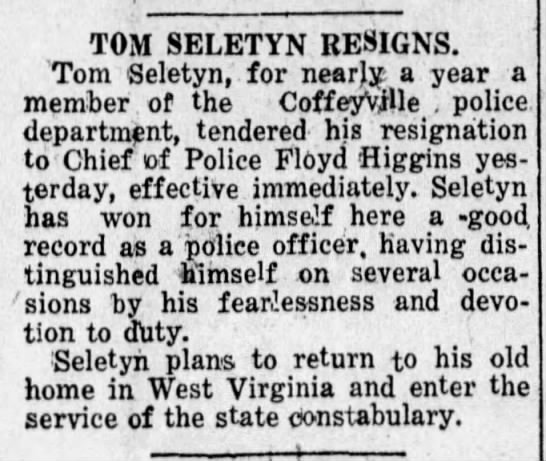 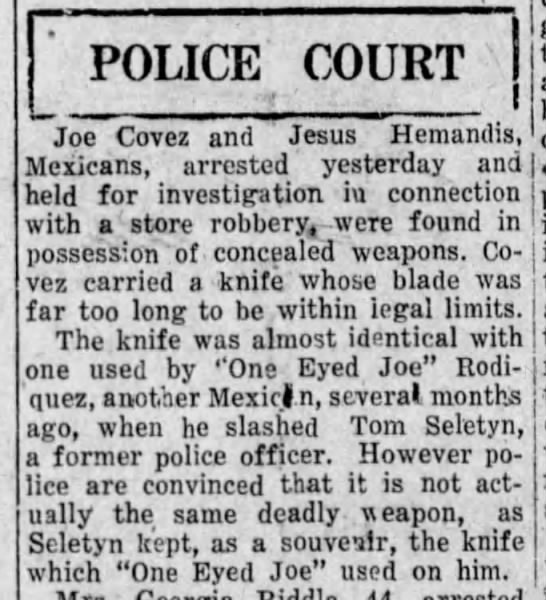 Should I wonder why he was riding around in a Dort with someone other than Mrs. Seletyn? 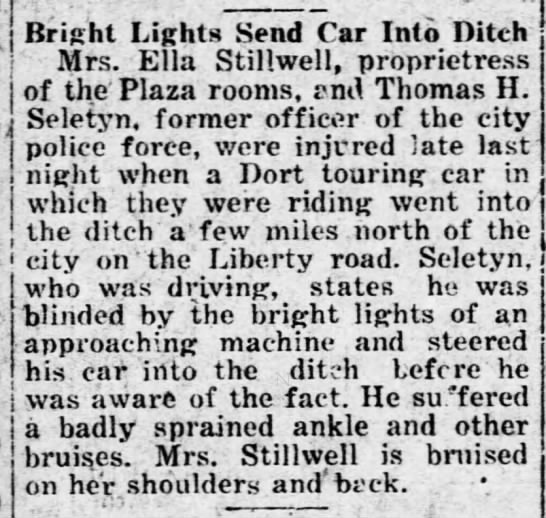 And, just for reference: 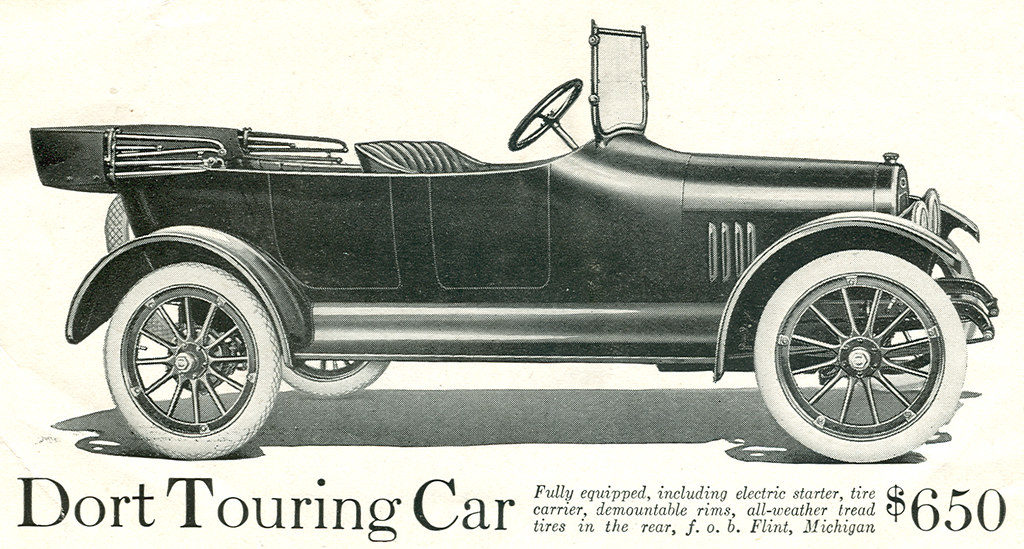 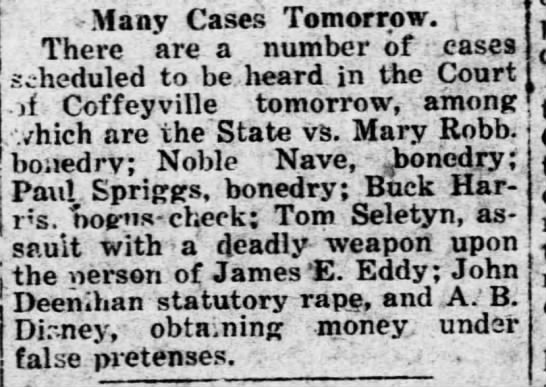 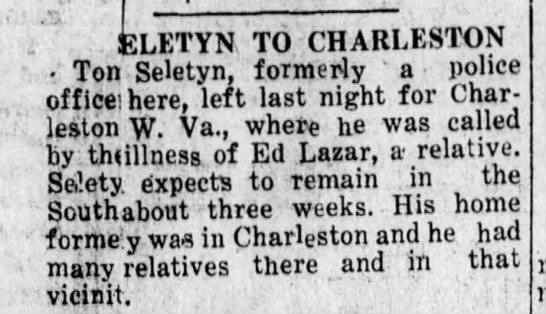 And that is the last of the real mentions of Tom Seletyn I can find in Kansas back in the early 1920s.