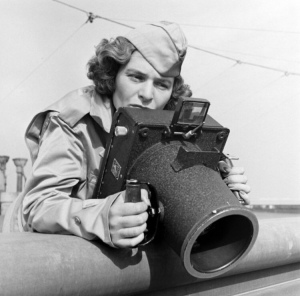 Margaret Bourke-White (1904-1971) was a documentary photographer.  She is a well known photojournalist who was the first permitted to take pictures of Soviet industry under the Soviet’s five-year-plan.  One of her photos of the construction work at Fort Peck Dam was the first cover photo of the first issue of Life Magazine.  She lived with Parkinson’s Disease for eighteen years before succumbing to its effects.

From Wikipedia: “One of Bourke-White’s clients was Otis Steel Company. Her success was due to her skills with both people and her technique. Her experience at Otis is a good example. As she explains in Portrait of Myself, the Otis security people were reluctant to let her shoot for many reasons.  Firstly, steel making was a defense industry, so they wanted to be sure national security was not endangered. Second, she was a woman, and in those days, people wondered if a woman and her delicate cameras could stand up to the intense heat, hazard, and generally dirty and gritty conditions inside a steel mill. When she finally got permission, technical problems began.  Black-and-white film in that era was sensitive to blue light, not the reds and oranges of hot steel, so she could see the beauty, but the photographs were coming out all black. She solved this problem by bringing along a new style of magnesium flare, which produces white light, and having assistants hold them to light her scenes. Her abilities resulted in some of the best steel factory photographs of that era, which earned her national attention. “To me… industrial forms were all the more beautiful because they were never designed to be beautiful. They had a simplicity of line that came from their direct application of purpose. Industry… had evolved an unconscious beauty – often a hidden beauty that was waiting to be discovered” Margaret Burke-White, Portrait of Myself (New York: Simon and Shuster, 1963), 49.” 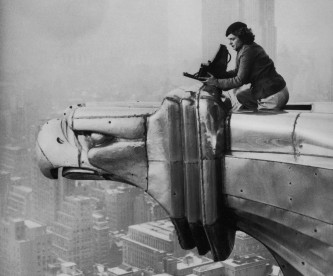 If you would like to learn more about Margaret Bourke-White here are a few links: