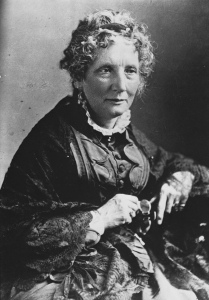 Harriet Elisabeth Beecher Stowe (1811-1869) was an author and abolitionist.  She was born in Connecticut, the seventh of thirteen children. She enrolled in the Hartford Female Seminary, run by her sister.  She received an education that was normally allowed only for young men.  She studied language and mathematics.  In her early 20s, she moved to Cincinnati Ohio to help her father at the Lane Theological Seminary.  She joined the Semi Colon Club, a literary club.  In the club she would meet Calvin Ellis Stowe, her future husband.

While living in Cincinnati, the area was financially booming with the canals and railroads fostering success. Cincinnati had recently suffered from the Cincinnati riots of 1829, a riot that began with ethnic Irish attacking blacks in an attempt to stronghold business.  In the aftermath, Harriet met a number of African Americans who lived through those attacks and those meetings would evolve her writing on the topic of slavery later in life.  The riots took place again in 1836 and 1841, those times being fueled by the native-born anti-abolitionists.

Harriet and Calvin were ardent critics of slavery and supported the Underground Railroad by temporarily housing several fugitive slaves in their home.  Most of their visitors continued north to Canada.  With the passing of the Fugitive Slave Law by congress in 1850, it was then prohibited to assist fugitives.  By this time the Stowes had moved to Brunswick, Maine where Calvin taught at Bowdoin College.

Harriet’s account for the inspiration of writing Uncle Tom’s Cabin started as a vision of a dying slave during a communion service at Brunswick’s First Parish Church.  That combined with the ability to understand profound loss after losing her 18 month old son, allowed her the empathy to write the story.  She contacted the anti-slave journal The National Era and in 1851, at the age of 40, published the first installment of Uncle Tom’s Cabin.  It was published as a serial in the newspaper.  The installments were published weekly from June 5, 1851 through April 1, 1852.  She was paid $400.  In 1852 the installments were combined to form a two volume novel that included three illustrations and a title page designed by Hammatt Billings.  Within a year it had sold 300,000 copies.  There were southern responders who wrote what are not called “anti-Tom novels” in hopes of showing how slavery was a positive thing. Some reached best-seller status though none could compare to Harriet’s work.

Harriet would travel to Washington DC to meet President Abraham Lincoln on November 25, 1862.  Her son would quote Lincoln as saying: “so you are the little woman who wrote the book that started this great war.”

She wrote thirty books, including: novels, travel memoirs and a collection of letters.
In reading about Harriet, I see that she was criticized for her support of the Highland Clearances in Scotland.  I will have to read further about the subject before I form an opinion on the matter.
If you would like to learn more about Harriet Beecher Stowe, below are a few links:
https://www.biography.com/people/harriet-beecher-stowe-9496479
https://www.history.com/topics/american-civil-war/harriet-beecher-stowe
https://www.harrietbeecherstowecenter.org/