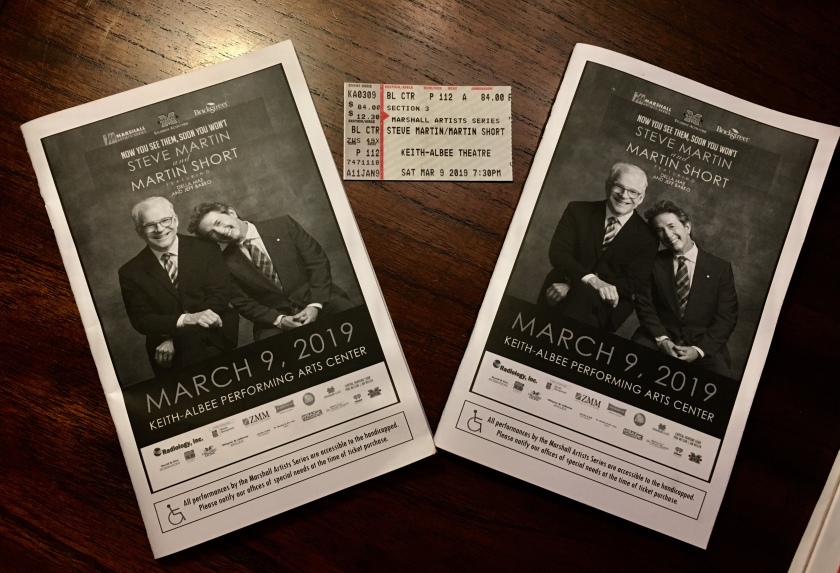 On March 9th my husband took me to see Steve Martin and Martin Short in their production of “An Evening You Will Forget For The Rest Of Your Life” at the Keith Albee Theater in Huntington, West Virginia.  It was a huge bucket list item, to see Steve Martin LIVE (no offense Marty)!  I tried desperately to send the admins of the theater an email stating I would pay extra for a meet-and-greet, if that was available.  To this day I have received no response – used the “questions?” feature on their website.  Small annoyance – if you have the feature, at least respond please and thank you, even to tell me “no”.  That will not keep me from seeing future performances there, yet still an annoyance.

I decided to get my hair done for the occasion, the hair artist must have thought I said “prom” date.

All kidding aside, I LOVED my hair cut and blowout. 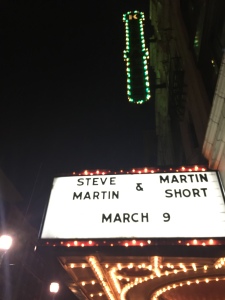 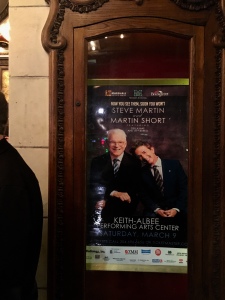 Because I did not realize they were going to appear in Huntington, I was late to the game getting tickets.  I was able to get two tickets, almost at the top, in different rows but “together”.  Which is evident in this photo: 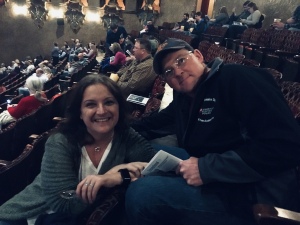 The wonderful woman who took the above photo was part of a huge family that was spread out over a couple of rows.  She insisted I trade places and they reorganized so that Bobby and I sat next to each other.  Which is also evident in this selfie:

Normally he says “I’m smiling on the inside” when I taunt him for his serious expression in photos.  This time, I made him wear his inside smile on the outside.  #LoveIt

I have one complaint and it was not an issue with the theater but the techs with the traveling show – there was a light bar in the way of the big screen, so much so that we were unable to fully see portions of the show (they utilize the big screen for various gags and the initial lead in).  There were small monitors halfway up but from our height it was not viable.  For the amount of money we paid for tickets (at this altitude), I would have appreciated being able to actually have an unobstructed view of the stage.

I tried my best to take pictures of the inside the theater, it is GORGEOUS!  They have stars LIT on the ceiling and an amazing stage complete with house-like structures framing the shadow box.

Here, let me show you other people’s photos: 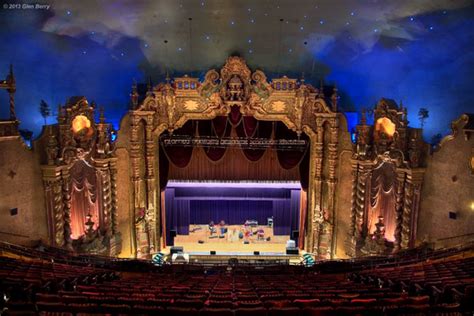 I am hoping that in the future there is a tour of the facility open to the public.  I would gladly pay money to see the theater completely lit, so the details are better viewed.

The show was ninety minutes in length and included multiple “story telling” bits and back and forths between the two.  The only revisit to Steve Martin’s older work (King Tut, Wild and Crazy Guys, etc) was during the opening montage (which was blocked for the most part from our view).  I still enjoyed it thoroughly.  They stayed very close to the Netflix special with a few changes for locational purposes.  Steve Martin noted that he had appeared at the Keith Albee almost 40 years to the month ago.  I hope he does not wait that long for the next visit.  I will forever hold out hope for his appearance on Mountain Stage!

He played two songs on the banjo (LOVE LOVE LOVE), I wish there had been more.  He was accompanied by an all female group called Della Mae who had a member I think played banjo in the style of Jimmy Hendrix.  Utterly amazing!  I have ordered a CD (yeah, I am old school and yeah, I will add them to my Spotify, but still…)  If you have not heard of them, here are a couple clips:

Overall – great performance in a beautiful theater.  Made for an amazing weekend.  Loved it!  AND – Husband loved it too.  Usually we do not have a lot of “likes” in common, it was a nice change of pace!!

I will end with a Steve Martin on the banjo clip!  Ok, maybe two or three…

If you haven’t seen it yet, check out the special on Netflix!

Who is on YOUR bucket list to see live?  I would love to know, answer in the comments below!