Martha (1894-1991) was a modern dancer and choreographer whose technique changed dance worldwide.

She was born in the area of Pittsburgh, Pennsylvania formerly known as Allegheny City.  Her father was an alienist, an early form of psychiatry and a third generation Irish American.  Her mother encouraged Martha’s dancing passion.  The family moved to Santa Barbara, CA when Martha was fourteen.  For over a decade she studied dance at Denishawn School of Dancing and Related Arts.

Once she left the confines of her studies at Denishawn, Martha was determined to strip dancing down to the foundational aspect of movement. In 1926 the Martha Graham Center of Contemporary Dance was open.  In the years that followed, she would not only advance her dance technique, she would also collaborate with Soichi Sunami, a Japanese-American photographer for five years.  The images they created are among the most well known of modern dance.

Fashioning her technique from her concept of simple breathing, her principle became known as “Contraction and Release”.  Each movement could separately be used to express either positive or negative, freeing or constricting emotions depending on the placement of the head. The contraction and release were both the basis for Graham’s weighted and grounded style, which is in direct opposition to classical ballet techniques that typically aim to create an illusion of weightlessness. To counter the more percussive and staccato movements, Graham eventually added the spiral shape to the vocabulary of her technique to incorporate a sense of fluidity.

Graham choreographed until her death in New York City from pneumonia in 1991.  She had just completed her autobiography, Blood Memory which would be published later that year.  She was cremated and her ashes were spread over the Sangre de Cristo Mountains in New Mexico. 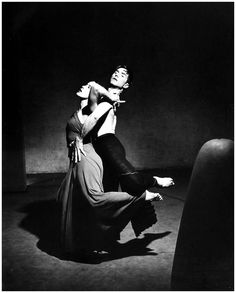 If you would like to learn more about Martha Graham, here are a few links for you: