Marie Colvin (1956-2012) was a brave journalist who would go into areas of conflict, putting herself in harm’s way, to report the atrocities few in the world would otherwise see. In January (2019), the Syrian government was found guilty and fined $302.5M for the targeted murder of Colvin. Her family had secured proof that the Syrian Arab Republic had directly ordered her assassination.  Take that in for just a moment.  One woman versus an entire regime.  Her work had exposed that government with such accuracy that she (further) damaged their image, allowed the rest of the world to view their actions with their own eyes through her reporting and became an immediate threat.  One woman.

I cannot begin to express how much I admire this woman.  She was doing the work that, as a young girl, I wanted to do.  I wanted to be a journalist, I wanted to enlighten people to the parts of the world they did not know (bad and good).  I am not sure my heart could have held all the dark and evil she saw while reporting though.  She was an important force and I lift up her memory with awe and amazement.

She was born in Astoria, Queens, NYC and grew up in Long Island.  Her father was a veteran of WWII who went on to teach English in the public schools of New York City.  Her mother was a high school guidance counselor.  When she graduated from Yale, she worked for United Press International (UPI).  In 1985 she began reporting for The Sunday Times.  She specialized in correspondence from the Middle East, covering such locations as:  Chechnya, Kosovo, Sierra Leone, Zimbabwe, Sri Lanka and East Timor.  In 1986, she was the first to interview Libyan leader Muammar Gaddafi after Operation El Dorado Canyon.  She is credited with saving the lives of 1,500 women from a compound where Indonesian-backed forces were attacking.  In 2001, while trying to cross into an area to cover the Sri Lankan conflict, she was injured in an RPG blast and lost the sight in her left eye.  After that she wore her iconic eyepatch. From her hospital bed she would finish writing the piece she was working on and submit it prior to its deadline.

“My job is to bear witness.  I have never been interested in knowing what make of plane had just bombed a village or whether the artillery that fired at it was 120mm or 155mm.”

In 2012, Colvin made her way into Syria, ignoring the regime’s attempts to block journalists from crossing their borders. They were in the middle of a civil war.  She positioned herself in the Baba Amr district, within Homs.  Her last broadcast went out on February 21 and was aired on BBC, CNN and ITN.  She was able to do this through the use of a satellite phone.  She would describe these as the worst conflicts she ever reported on.

Colvin died along with French photographer Remi Ochlik. Autopsy results from Damascus (performed by the Syrian government) concluded that she was killed by an IED filled with nails.  The government would deflect blame onto terrorists who were fleeing the Syrian Army.  Paul Conroy, the photographer accompanying Colvin, would refute this claim.  Conroy would note that her death occurred as a Syrian barrage of artillery fire struck their media center.  The Syrian army used their satellite phone signals for targeting.

July 2016, Cat Colvin, Marie’s sister, filed a civil action against the government of the Syrian Arab Republic for extrajudicial killing.  Those court papers were revealed in court in April 2018 and in January 2019 an American court ruled the government was liable.  According to the judgement, it stated that Colvin was specifically targeted “because of her profession, for the purpose of silencing those reporting on the growing opposition movement in the country. [The] murder of journalists acting in their professional capacity could have a chilling effect on reporting such events worldwide. A targeted murder of an American citizen, whose courageous work was not only important, but vital to our understanding of war zones and of wars generally, is outrageous, and therefore a punitive damages award that multiplies the impact on the responsible state is warranted.”

If you have not seen it already, I highly recommend the movie A Private War that detailed her life and death. 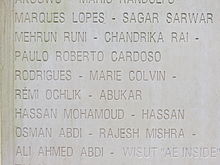 If you would like to learn more about Marie, here are some links: