Ada Lovelace (1815-1852) was the (only legitimate) daughter of poet Lord Byron.  Her official title was: Augusta Ada Byron, Countess of Lovelace.  Her mother left her father weeks after she was born.  He died when she was eight without ever seeing her again.  Her mother was insistent that Ada be tutored extensively in science and math, which was unusual for the times.  It was not as much for forward thinking feminism as it was to “make” Ada less like her father, who was often moody.  Her mother would also make her lie without moving for hours in an attempt to teach her self control.

According to Biography.com: “From early on, Lovelace showed a talent for numbers and language. She received instruction from William Frend, a social reformer; William King, the family’s doctor; and Mary Somerville, a Scottish astronomer and mathematician. Somerville was one of the first women to be admitted into the Royal Astronomical Society.”

Around the age of 17 her life would be forever changed through the meeting of Charles Babbage, an accomplished mathematician and inventor.  He saw great potential in her thought process and took her on as an apprentice of sorts.  He is known as the “father of the computer”.  He created the “analytical engine”.  Ada was asked to translate an article that had been written on the device.  Once translated, she also added her own notes to the translation.  Her work was published in 1843 with only her initials to note who the author was.  Within those notes she explains the potential of code and describes looping.  The extensive notes utilized in her translation has led many to consider her the first person to ever publish a computer algorithm.  Basically speaking, she is the pioneer of scientific computing. 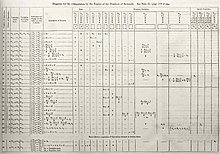 Lovelace’s diagram from “note G”, the first published computer algorithm
According to Biography.com: “Ada Lovelace’s contributions to the field of computer science were not discovered until the 1950s. Her notes were reintroduced to the world by B.V. Bowden, who republished them in Faster Than Thought: A Symposium on Digital Computing Machines in 1953. Since then, Ada has received many posthumous honors for her work. In 1980, the U.S. Department of Defense named a newly developed computer language “Ada,” after Lovelace.”

If you are interested in learning more about her work, here are some links:

Her entry in Britannica.com is HERE