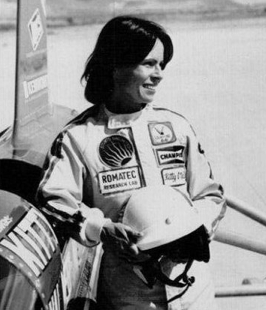 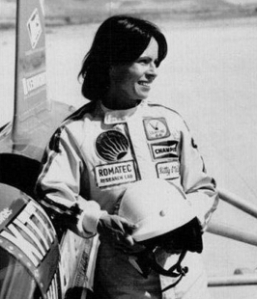 Kitty O’Neil (1946-2018) was an American speed icon.  She was a stunt woman and racer who earned the title “fastest woman on earth”.  She is one of my favorite badass women in history.  She was deaf and it did not stop her. She had aspirations to be an Olympic diver and even though she had multiple illnesses to converge and cut that career short, it did not stop her.  She recovered from meningitis and had two bouts with cancer.  On the other side she said “diving is not scary enough for me” and then took up racing.

By the 70s, she was participating in big races like the Baja 500 and the Mint 400.  Through those races she met Hal Needham and Ron Hambleton (having a romance with Ron).  Through her training with them, in 1976 she became the first woman to join the Stunts Unlimited Agency, the leading agency used by Hollywood.  She worked on The Bionic Woman, Airport 77, The Blues Brothers, Smokey and the Bandit II and (my personal favorite) Wonder Woman.

While working on the set of Wonder Woman, she was required to do a high fall stunt.  Lynda Carter’s regular stuntwomn, Jeannie Epper, was not qualified to do it.  With the successful completion of the stunt, O’Neil set a women’s high fall record of 127 ft (12 stories).  She would go on to break that record with a 180 ft fall from a helicopter.

Some other records she held:

She was held through her contract to only break the women’s land speed record, not the men’s. She was forced to allow Needham to win the men’s world record although she could have surpassed his speed.

O’Neil had set 22 speed records on land and water. She died on November 2, 2018 of pneumonia in Eureka, South Dakota at age 72.

If you want to learn more about Kitty, here are a few links:

Stockard Channing portrayed her in the film Silent Victory: The Kitty O’Neil Story