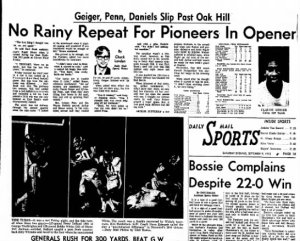 The article reads: Geiger, Penn, Daniels Slip Past Oak Hill • — — ■ No Rainy Repeat For Pioneers In Opener “The first thing I thought was ‘oh, no, not again!” So said East Bank assistant coach Roger House when it rained during the East Bank Oak Oak Hill game at Calvert Field Friday. “I THOUGHT, ‘Here we go again, just like the last two years,” he continued. Friday marked the third year in a row it has rained on a Pioneer – Red Devil football game. But this time the outcome outcome was different. . . East Bank won 18 – 0. The previous two seasons, Oak Hill rallied from a 14 – 0 deficit to a 15 – 14 win and recorded a 0 – 0 tie. Last season’s 15 – 14 win was the only blemish on East Batik’s state championship record. The score was . 6 – 0 midway through the second quarter when the rain came. “I looked at the scoreboard when it started started raining and wondered if one touchdown would be enough or not,” House continued. One proved to be enough, but the Pioneers added two more touchdowns for insurance. “I didn’t know what to think when it started to rain,” said a soaked but happy Don Arthur. Arthur. “You know, rain really hurts our backs.” “Our backs are in trouble when it rains,” added House, offensive coordinator. “All our runners are speedsters, especially especially Claude Geiger and Sylvester Sylvester Penn. And when they start lifting their knees in the mud, they just end up spinning their wheels,” But, Geiger, Penn and De Wayne Wayne Daniels proved Arthur and House wrong. In the rain laden laden second half they rushed.  And with a grin, Daniels said, “We didn’t feel nothing for 101, 40 and 37 yards, respectively. Geiger finished with 159 yards. When asked what effect the rain had on their play, the trio was filled with humor. “Was it raining?” said Geiger Geiger feigning shock. “Man. I thought that was sweat dripping dripping off my forehead.” “Heck, we were going so fast the rain didn’t hit us,” The sunshine wasn’t a two way street, however, as Oak Hill’s record fell to 0 – 2. According According to Daily Mail records complete complete through 1938, it was East Bank’s 23rd win over Oak Hill against only eight losses and two ties. It also marked the 13th time a Pioneer defense has blanked the Red Devils. When informed of that statistic, Arthur commented, “I didn’t know that. Heck, we only had two shut-outs all last year and now we open the season with one. I thought our defense really hit well. Gary Walker played a super game. But, it was good team defense that did the trick.” anxious moments in the second half when both Walker and premier defensive end Keith Bigier were felled by injuries. Walker suffered a sprained knee, while Bigier sat out most of the second second half. Arthur said both would be ready for next week’s game at Dunbar. Meanwhile, Oak Hill coach Carroll Bumgardner was anything but happy in his dressing room. When asked what he thought when it started to rain he said, “I didn’t think anything about it, we were losing.” —Daily Mail Photos by Chet Hawes 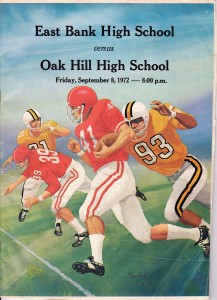 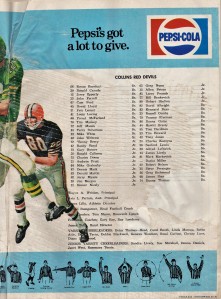