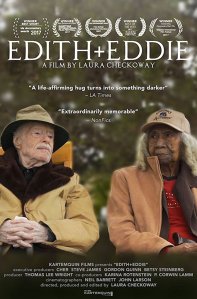 This short shred my heart into a million pieces.  I was sobbing throughout.  Having taken care of my Dad, elder care is a subject that hits close to my heart as it is.  I wrote this on the night of the 20th.  I will go back on the 21st and inevitably make changes. I wrote, backspaced, wrote again.  This documentary brought out more feelings that I thought possible in a short 30 minutes.  Anger, bitterness, doubt, despair.  All the bad emotions mixed on one big batch.

There are those people who will say they are acting in the best interest of an elder person.  Sometimes they are.  Sometimes they think they are.  Sometimes they are not.  I have never wanted to reach through a screen to strangle a person as much as I did Jessica Niesen.  I looked her up just now.  She is still a lawyer who is an expert in elder care.  I guess expertise is in the eye of the beholder.  The court placed her as the guardian of a woman she never met in person, never knew on a personal level, only knew her paperwork.  This woman never met Edith in person until the night she ripped her out of her own home and away from her husband.  This story played out a couple of years ago, the documentary was released last year.  This woman is still a practicing attorney.  Is there no outrage for the injustice of elder care?  Or does the law of the land lean toward injustice?  The kicker, after Eddie’s death (where Edith was not allowed to come say goodbye), Niesen became responsible for his remains.  The end of the documentary states that to this day, a service or memorial had never been arranged.  ((seethe))

I put everything I had to getting my Dad back on his feet, getting him back home and to the healthiest version of himself.  He had open heart surgery, five hours from his loved ones because the VA is flawed and lacks communication that would be beneficial to the families of loved ones requiring services. While in Richmond, after his surgery, he went into cardiac arrest.  From that event he had hypoxia (lack of oxygen to the brain).  He went from the hospital to a nursing home to a second nursing home.  From that nursing home, after a series of miracles, he went home for three years until he became very ill and succumb to an array of illnesses in my home, in a hospital bed in my sunroom.

There was a woman in my Father’s life who (in my opinion) took advantage of him.  He bought her dinners, took her places, paid the tabs (I managed his money, I saw the checks and debit card transactions).  She, in turn, told him that she did not want him to be an “official boyfriend” (Dad’s words, not mine), just a friend who had fun (also Dad’s words).  Dad and I had conversations about it.  He knew I did not like her, we spoke of it.  He knew that she said horrible things to my kids, we had conversations about it.  She knew we collectively disliked her.  She wore whore red high heels and a whore dress to his wake.  I suppose she was making a statement.  In whore clothes, it would be hard not to.  Dad would lament the passing of my Ma and talk about how he missed her and that this woman was no replacement, just company.  It is my opinion (and having been told details from others) that she had more than one “friend” who bought dinners and paid for things.  On one occasion she called members of our family to tell them that Daddy was at her house, had taken too much insulin and someone needed to come get him because she had to go show a house (she was a realtor).  I seethe now because the one person in Dad’s family who was this woman’s friend never told me that detail.  The only thing I was told was that Dad had over dosed his insulin.  I found out after, after he was gone.  People are assholes.  They really are.  Self righteous assholes.  I state these facts because watching the love that Edith + Eddie shared, in my humble opinion, was a genuine gift at their age.  To have someone at that stage of  your life care for you and you return those feelings – what an amazing gift.  And that gift was not honored in this case by one daughter nor the guardian the court assigned to Edith.

When I received the call that we needed to prepare ourselves, that we needed to make decisions about end of life care for Dad, I never thought once about making sure everyone was there in the room with the doctors to offer their input.  I trongly guided the conversation because it was my intention to bring my Dad to my home to die, not put him away in a hospice facility just because it was convenient for one or two people to maybe visit him for a few minutes at their convenience.  I fought for that right.  Dad used to call me his pitbull, fighting for him at every turn.  I wanted him to be in our home, surrounded by loved ones, close enough that my Sister could come visit and have a place to stay if she wanted.  I refused to consider a hospice facility, as that woman found out when she mentioned it in my presence.  I had the room, I had the resources, my boss was kind enough to offer me the time.  I told all of those present that I would open my home to have an early Thanksgiving, give me a handful of days to prepare, and everyone could come to my house, stay in my home, whether we liked each other or not.  I stated that I would let my step-brother, who I have never been on good terms with, come to my home and I would have my husband there to greet him and I would remove myself from the situation so he could say goodbye to his Dad.  I certainly didn’t do it for my love of these people, but for my Dad’s love of his family.  That is what you do if you truly love someone.  You remove your feelings from it all and do what is best for your loved one.  That one Sister cared for her Mother (Edith) and the other sister took their Mom out of the only house she ever knew and then refused to allow the caregiver Sister to see her Mom before she passed – is criminal.  And Jessica Niesen facilitated that.  And did not facilitate a memorial service for Edith’s husband, Eddie.  I just cannot.  At all.

This 30 minute documentary brought out all of my bitterness for the assholes in life that care only about being right above the person they are supposed to love.  It brought to the surface all of my feelings, all of my many many feelings.  It reminded me of the frustration I felt at trying to organize my Dad’s finances and blindly trying to do my best to include people I felt aided in my Dad’s demise.  Every. Feeling. Felt.

I know my intention is to review the documentary.  I have only one line: It rebroke me.