Another mass shooting.  Another set of thoughts and prayers.  Another round of arguments for/against.

There was this one time when I received a call from the lunch lady at my kids’ school.  She asked if I was Amanda’s Mom.  Yes, yes I am.  I sat there baffled as to why a lunch lady would call, did she forget her money?  She went on to tell me a story about my daughter.  She watched as Amanda stood in line to get her tray of food.  There was a younger boy who looked lost and Amanda asked if he was ok.  He had forgotten his lunch money and was starting to tear up.  Amanda pulled him into the line and fumbled in her pocket for an extra dollar which she handed to him.  She explained that that was enough for the food but he would have to do without the milk (which I think was like a quarter more).  The lunch lady watched this and was moved by Mander’s compassion for a younger kid who was hungry.  She thought I should know.  And although I was very proud of my daughter, I was not surprised by this action.  She helps people.  She defends people.  She looks out for people.  It’s just what she does.

There was this other time – the woman next to Daddy’s house left a candle burning or something of that extent.  She had DOZENS of cats (which Daddy bitched about and yet he fed them because he could not stand to see an animal hurt or hungry – which is why I find myself in my current feral cat situation).  This neighbor was gone to a relative’s to stay the night when the house caught on fire.  I had already left for work – I lived up the street from where my Daddy and Alex lived.  I was the first shift at a cafe that served coffee and was required to be there before the crack of dawn.  Daddy describe his moment of terror as Alex dashed onto the front porch, where flames could be seen through the window, to untie a scared dog on the front porch. He gave no regard for himself, he knew it was the right thing to do.  Help the helpless, no matter what.

Our family is a continuous line of helpers and fixers.  It is in all of our natures.  We were raised by parents who wanted to help others and we passed that trait along to our offspring.  My children are fixers and helpers.  My Daughter is amazing at deescalating situations where people are mad or arguing.  She was fired from a job for stepping between two people who were about to fight, because it was the right thing to do.  My Son worked for the Boy Scouts, after briefly leaving the education sector because he felt he could be of a greater benefit in service to kids there.

The thing is – I read the stories of these mass shootings, these senseless and cowardly acts of violence and I grieve for the children.  My heart breaks.  But the stories of those educators and coaches who step in front of bullets – those rip me in half.  Those are the ones that feel even more personal to me because my Daughter teaches on the college level and my Son is a substitute teacher at several schools while he pursues another degree.  They are educators.  They are the ones who would be trying to work out in their head how to fix this, how to help the innocent children.

The cartoon below… I saw it and cried.  I pulled myself together but I kept going back to this drawing and crying more. The children and teachers, victims of previous school shootings, welcoming Coach Feis who threw himself in front of bullets to save children.  The power of this drawing crushes my heart.

Something has to be done.

The original drawing can be found of this artwork on the artist’s (Pia Guerra) Twitter feed here: Pia Guerra 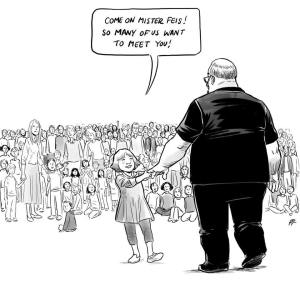