I originally posted this blog on FB notes (Mar 8, 2009).  In an effort to get all of my blogs in one place (and because I caught part of the movie this past weekend and was reminded of how well done it was) I will post it here with a few updates:

Based on real-life events, Lt. Col. Michael Strobl (Bacon), a volunteer military escort officer, accompanies the body of 19-year-old Marine Chance Phelps back to his hometown of Dubois, Wyoming.”

The movie was eighty five minutes long, I cried eighty three of them. What an amazing movie, what a heart wrenching subject. This movie does not lecture us on the rights and wrongs of war or the politics of battle. Nor does it depict graphic violence in a war that many work to justify while just as many work to condemn. What it tells us….no tell is not the correct word….what it shows us is the journey home of a fallen Marine who died serving his country in Iraq. The imagery used in this movie was so well done, so well placed, that I feel as if I made the journey along with Strobl.

This movie educates the average citizen on the mechanics of preparing a fallen Marine for his final journey home. We are shown the delicate care that is given to ensure that the admiration due is given…the preparation of the possessions to be turned over to the family, the making of the final uniform to be worn.

Kudos heaped upon kudos to Ross Katz, the director of this piece. He made it visually stunning and not garish. Kudos to Kevin Bacon for showing us that although Marines are very tough on the exterior, they also have a compassion with amazing depth for the their brothers in arms. Finally (but not lastly) kudos to Lt Col Michael Strobl. Thank you for your service to our country and thank you for telling the story of PFC CHance Russel Phelps, a Marine who as the story says, touched many people.

Did you see the movie?  Did you like or hate it?  Let me know in the comments below! 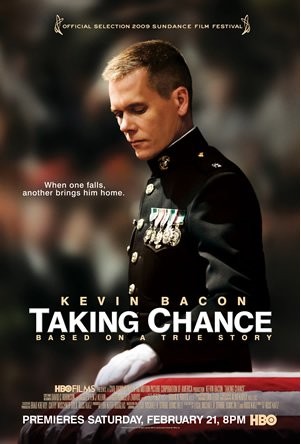 IMDB Synopsis: In April, 2004, casualties mount in Iraq. At Quantico, choices focus on increasing troop strength or only replacing casualties. Lt. Col. Mike Strobl crunches numbers. Stung by his superior’s rejection of his recommendation because he lacks recent combat experience, Strobl volunteers for escort duty, accompanying the remains Pfc. Chance Phelps, killed at 19. From Dover to Philadelphia by hearse, from there to Minneapolis and on to Billings by plane, and then by car to Phelps’ Wyoming home – person after person pays respects. Kind words, small gifts, and gratitude are given Strobl to deliver to the family on this soul-searching journey.