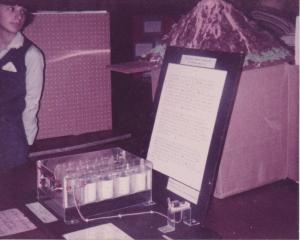 When Daddy passed last October, there was the daunting task of going through boxes of paperwork and random manila envelopes of “stuff” to determine what held value (sentimental or otherwise).  Ever so often one of these containers would yield a picture or a document that acted like a time machine for me, hurling me through time to another place long ago.  The picture above – wow, that one struck hard…

I attended Sts Peter and Paul Catholic School in Oak Hill, WV.  During my 5th – 7th grade years I was encouraged to participate in both math and science fairs.  For my first science fair, I poured through books to find the “less used” kind of topic.  After all, EVERYone seemed to do a volcano (as photo provides evidence).  And, although the volcano exhibit was awesome, I knew there would be more than one.  I needed unique.  I knew it would be more difficult because “unique” always required more work, otherwise everyone would do it.  So, I approached Daddy (the industrial engineer and certified inventor) to ask for advice on taking a lemon and putting some wires into it and making it power some little electrical device.  ((I pause for a moment to scroll back up to the photo and chuckle with a warm heart.))

Over the next four weeks Daddy made this (my) project the center of the (his) universe.  We went through various phases (4 cell, 8 cell and then 16 cell).  We used real lemons, lemon juice, a combo of both.  We used lemons mounted on boards of various types but settled on lemon juice in plexiglass (after going through a couple of test model variations).  Wires were fashioned, cut, recut, laid this way, run that way.  There was a toy that required a battery in one concept that was put aside quickly.  A small motor with a fan was decided upon. Every evening we would sit down with yet another phase or prototype for the “great reveal” and often we would be discouraged by failure.  Then one evening, the little fan moved (somewhat).  We (he) were onto something!  Listening to Daddy’s excited chatter, I could understand the excitement of scientists like Alexander Graham Bell and Marie Curie as they made their breakthroughs!  That last week was a whir (more plexiglass bought, variations of glue for aesthetic appearance, wrapping our (his) brain around why this worked over that. Mom chipped in by making sure that the message boards were right and neat.  We painted plywood to mount the whole thing on.

I advanced from Sts Peter & Paul’s science fair and went on to the Fayette County science fair.  Daddy was SO proud.  There, as the judges came around, one asked me what my Dad did for a living.  I replied, “Industrial Engineer”.  He smiled politely and asked a few questions (that I easily answered because I spent a month watching and listening to Dad as he reveled in my (his) science project).  Needless to say, I didn’t even place.  But, one of the volcanoes did.  So much for unique….

That expression in the picture though. It screams of, “Next year I will ask to do a volcano.”  Ha!

I was fortunate enough to judge two science fairs for Mason County, WV schools in recent years.  It was fun to watch/participate and I could now look through the eyes of that judge so long ago and realize that it is easy to pick out those who had the secret weapon in their pocket (a parent who had the time and inclination to “pitch in”).  I consider myself blessed to have a loving Dad who wanted to be all in, hands on.

Did you ever participate in a fair (science, math or otherwise) as a kid?  How much parental involvement did you experience?  OR, do you realize a time when you commandeered your kid’s project, much to their dismay?  Let me know in the comments below!