While scrolling through my Facebook newsfeed, I came across an ad for free tickets to see Bob Boilen at Stuart’s Opera House in Nelsonville, Ohio.  I had been curious about Stuart’s for some time but had not had the opportunity to catch a show there.  I decided to grab two tickets and when I found out that John Paul White (formerly of The Civil Wars) was on the roster, I knew that I should ask Mander to go as she was a fan of the duo.

Stuart’s Opera House was built in 1879 and was registered on the National Historic Register in 1978.  They hold live performances there regularly as well as produce the annual Nelsonville Music Festival.  According to their website, the opera house was built by George Stuart, who began life in show business as the owner and operator of a showboat, traveling with a minstrel troupe.  The showboat sank in 1869 and shortly thereafter he started construction on the opera house.  At the time of construction, Nelsonville was experiencing a surge in activity due to the coal rail system.  In 1924 the opera house closed when the coal boom began to come to a halt.  They remained closed until the 1970s when the Hocking Valley Museum of Theatrical History bought the building in hopes of restoring it.  Before they were able to restore it, the building caught fire on March 24, 1980.  Seventeen years later, and after much debate, the opera house was restored and reopened.

A YouTube video of the story of Stuart’s Opera House The venue was beautiful, well laid out and had a cash bar (extra points for a beer during the concert).  I loved the feel of it.  Although we were held up because of a traffic accident (not us), we were later getting there than anticipated.  However, we were able to grab two seats at the edge of the stage and the view from those seats was wonderful.  I am a huge fan of NPR, especially Tiny Desk.  Bob Boilen is the host of Tiny Desk and he hosted this event at Stuart’s Opera House.  He also hosts All Songs Considered on NPR.  After the show, I bought Mr Boilen’s newest book Your Song Changed My Life (“oral history of modern music, told in the voices of iconic and up-and-coming musicians, including Dave Grohl, Jimmy Page, Michael Stipe, Carrie Brownstein, Smokey Robinson, and Jeff Tweedy, among others”).  He was a joy to listen to because of his passion for music.  To be able to say that you worked your whole life in a field that you loved and admired – well, what greater accomplishment is there?

My daughter’s photos of Bob Boilen from the night, originally posted to her Facebook: HERE

The first musical feature was My Bubba.  My Larsdotter and Bubba Tomasdottir are a duo from Sweden and Iceland.  The band name is taken from a mashup of their first names.  They met when Bubba answered an ad to rent a room.  One evening while washing dishes they started singing together.  It was their way of passing the time as they had no TV.  Their song: “You’re Gonna Make Me Lonesome When You Go” reminded me of the early seasons of Grey’s Anatomy when they chose amazing music that was not overplayed on the airwaves to underscore their storylines.

They share this precise harmony that is mesmerizing. Boilen adequately described them as “playful”.  I have since put their music on my Spotify feed and they make me smile every time I hear them.  The way they weave their voices together is so perfect, so beautifully warm and inviting.  Listening to them felt like…”home”.  They sang a song which they noted as an Icelandic Lullaby. It tells the story of a woman who falls in love with an outlaw.  They have a child.  When the law closes in, they escape to the glaciers and are about to get caught.  The mother throws the baby into a waterfall because she felt that it was a better fate for it to die that way than be the bastard child of an outlaw.  Another great song they sang was Big Bad Good which they intro’ed by saying it was a history of their ancestors.  Amazing voices that I hope to see live again one day.

My daughter’s photos of My Bubba from the night, originally posted to her Facebook: HERE 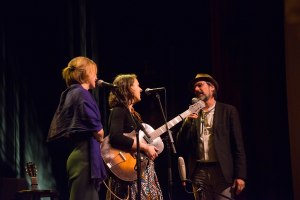 Next up was Adam Torres.  His music sounded like the closing song of a movie.  He plays guitar beautifully.  Watching his hand strum the guitar was hypnotizing.   I could listen to him play all day.  He is inspired by people who listen to records.  He was a skinny little fella with a big voice that filled the room.  When he sings, his voice is like a bird that takes flight, climbing higher, soaring.  He sang Leonard Cohen’s Suzanne (“She’s touched your perfect body with her mind…”).  Adam Torres is a local favorite as he lived in the Athens area where he attended Ohio University.  While there, he released Nostra Nova with the help of local musicians.  He referenced his Tiny Desk concert and I think it is a great illustration of his range.

My daughter’s photos of Adam from the night, originally posted to her Facebook: HERE

The final act was John Paul White.  Grew up in a home that loved music.  His Dad especially loved country music.  If ever he has a movie made about his life, Johnny Depp has to play him.  He does not like songs to be over four minutes in length.  He does a Slim Whitman song every night for his Dad.  He is a musical storyteller with an old soul.  It is like he “uses all of the strings” while playing the guitar.  He took a chunk of time off from singing because he was suffering from burnout.  I am so thankful he returned.  He played a very long set that included songs full of beautiful melancholy.  Listening to him was like listening to something pre-recorded – the quality of his voice and perfection in presentation.  All so well done, so professionally beautiful.

My daughter’s photos of John Paul White from the night, originally posted to her Facebook: HERE

At the end of the show, all of the artists returned to the stage to sing Stand By Me.  It was beautiful and rounded out an amazing evening of entertainment.

I also took a few photos that night. Before the concert, Bob Boilen, John Paul White and My Bubba visited Ohio University School of Media Arts and Studies and took part in a live interview.