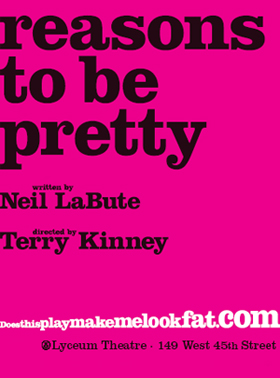 This blog was originally posted on Facebook notes on April 29, 2009 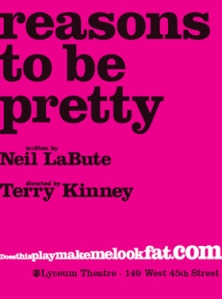 I asked to go see this play. I wanted to go see it pretty badly. However, once I was leaving at its completion I felt that I was a little let down.

If you live in NYC, you HAD to see the posters for this, they were everywhere. Bold colors, catchy photos. That alone was a draw for me. 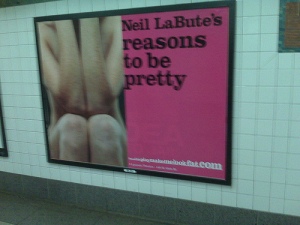 The play is about a not-so-innocent slip of a boyfriend’s tongue, the overhearing of the slip by his buddy’s girlfriend who reports said slip back to the girlfriend. What was this slip? Well, in a nutshell it was a comparison of a new co-worker’s pretty face to the “regular” face of the girlfriend. Ouch.

A fight ensues, a chair is thrown, the word fuck is used gratuitously and the comedic drama begins. It is about regular people, doing regular things and having regular issues.

A Rough Week For Reasons To Be Pretty.

So why did I not like it with an enthusiasm that has been displayed by my friends and others? Not sure. I felt the dialogue came at us in rapid gunfire bursts. I felt that it was not of a Broadway standard. I wish I could delve into the technicals of why, but I cannot. You know how some people like brussle sprouts and can eat them to their heart’s content and others have a gag effect when the word sprouts is even uttered? I think that is the case here.

There WAS an entertaining portion of the show. It happened prior to the performance. A voice comes over the intercom and directs you to “rate” the person next to you and/or yourself by texting from your cell phone. Read more here: In-Theater Texting Campaign.

The four actors who were in this performance were: Marin Ireland, Thomas Sadoski, Piper Perabo and Steven Pasquale. Of the four Ireland and Pasquale were my favorite. Pasquale delivered in his “Rescue Me” demeanor and Ireland, though quite attractive actually, transformed herself into the “regular” girl quite well. I was not a fan of Ms. Perabo. I could not buy into her being the security guard or the girlfriend to Pasquale. It just did not work for me.

Oh yeah, kudos where kudos are due – LaBute figures out a way in this play to include the words: fuck, shit, hell, damn, cunt, twat and cock. Forgive me if I forget one. You would think that that alone would give me garner to thumbs up it…. sigh.

Would I tell you NOT to see it? No. I think it was an ok play. But then again, I don’t like brussle sprouts either. Go see it, tell me what you think.