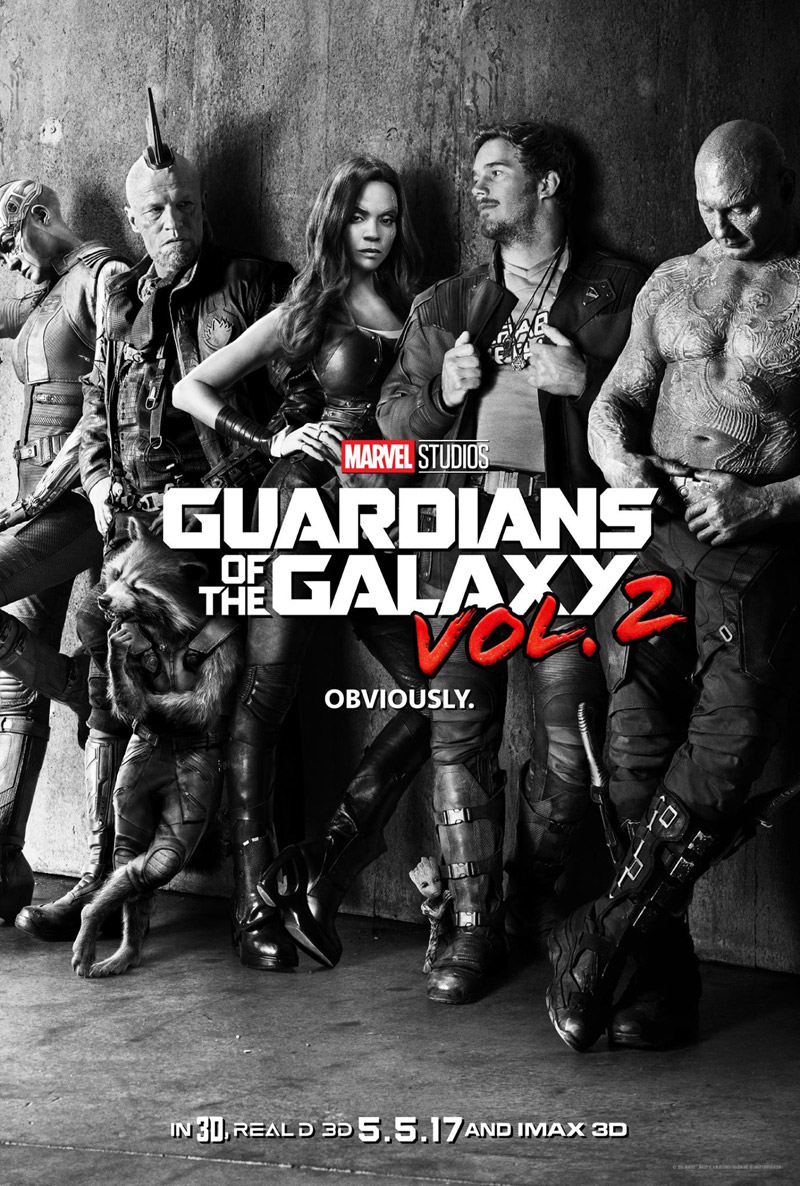 This was Mother’s Day weekend and what better way to spend quality family time than watching movies??  It is what we do…  This weekend we have a twofer.  One at the theater and one at home.  First up: Guardians of the Galaxy Vol. 2.

The new Marvel Studios intro to logo – despise it.  Just, honestly hate it.  It would be great fun if we could have maybe a play on the old comic books for the particular movie you are watching.  Why are we watching a promo for all other movies in the MCU?  Poor marketing, I believe.

For the first hour and a half of the movie, I felt as if maybe Mel Brooks was the director.  The gags were over-the-top and oftentimes more than was necessary.  The gags were funny, do not get me wrong.  It just seemed the volume of them was a bit much.  The last forty five minutes I felt were more true to the original film that I love and adore.

In the opening scenes, huge product placement for Mustang and Dairy Queen. I thought I had read somewhere that they planned on doing a little CGI for the Kurt Russel flashbacks, to make him younger.  However, in reading Vanity Fair’s article, Russel mentions his makeup artist, Dennis Liddiard (they have worked together on 28 films) was able to “age him down” for the film.  In the same article, it is noted that Russel did a number of his stunts, impressive for an older man working opposite of Chris Pratt.

I love that Howard the Duck is all over the MCU. There was chatter of a Howard the Duck movie for 2017 but a quick check of IMDB does not reference one upcoming.  I would go see it if they did.  The original movie with Lea Thompson and Ed Gale has a divide among people who believe it is a great cult classic or just a crappy movie.  I believe it is horribly awesome.

Also, I kept thinking “Guardians of the Gilmores” every time Sean Gunn stepped into frame.  Two things that fascinated the hell out of me that I have read: 1 – James Gunn, the writer and director of GotG is the brother of Sean Gunn.  2 – Sean Gunn is the on-set stand in for rocket.  In a recent interview, James Gunn noted: “Sean Gunn is not a stand-in. He is a motion reference actor. That means we film everything Sean does on set as Rocket. We film it. I don’t stop doing takes of him until we get the performance right and then we use that performance as a basis for much of Rocket’s acting. And he does a fantastic job in that role. He knows it. He understands it. And also very important, Sean is able to physically do something most actors aren’t able to do, which is waddle around on all fours. He’s always been an incredibly limber guy that can to do a lot of strange physical things. And the fact that he’s able to waddle around on his legs all day long at the exact height of Rocket is quite a feat and quite quite difficult.”

A real smack of Mel Brooksish movie making came when the Ayesha, played by Elizabeth Debicki, is walking on the blue carpet and the woman rolling it out starts to have issues and it is an “egg of the face” scene for the character.  I seriously thought about Joan Rivers playing Dot Matrix in Spaceballs. It bothered me a little.

Sylvester Stallone did not bother me as much as I thought he would.  However, my Son whispering “I am da law” made me chuckle.

There were two moments I felt that Star Wars was playing in front of me – the “Star Lord I am your Father” moment and just after when his Ego is teaching Star Lord about the ball of electricity he can conjure up between his hands (kinda like the Force).  I was not bothered by those though.

The one scene I rank right up there at the top is the killing of the rubberneckers with the blue The Blob mess rolling across earth.  Rubberneckers aggravate me in “real life” so it is fun seeing them taken out on the screen.

Overall: I did like the movie.  I loved the music.  I loved Groot.  I will buy it for my DVD library.  I rate it a solid B.

Did you see it and like it?  Let me know in the comments below!

IMDB Synopsis: Set to the backdrop of ‘Awesome Mixtape #2,’ Marvel’s Guardians of the Galaxy Vol. 2 continues the team’s adventures as they traverse the outer reaches of the cosmos. The Guardians must fight to keep their newfound family together as they unravel the mysteries of Peter Quill’s true parentage. Old foes become new allies and fan-favorite characters from the classic comics will come to our heroes’ aid as the Marvel cinematic universe continues to expand. Written by Marvel Studios

Tagline: This summer, the galaxy won’t save itself.