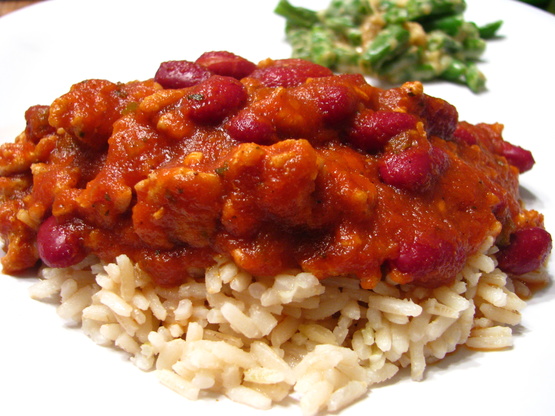 I happened upon reduced ground chicken at The Walmart and decided it was time to try out this meat choice I have never used before.  There is always the worry of your dish being too dry.  I am, after all, the queen of greasy veggie soup which oozes of cow meat.  But in an effort to be healthier, I thought why not!

It turned out delicious. I made a number of changes to the recipe (in red below).  I did not serve it with rice (that would have been too much).  I did have oyster crackers of which to partake.

If you try it, let me know your tweeks.  This is def a try again recipe.  The only downside is that the spaghetti sauce made it somewhat sweet but paired with extra chili pepper I thought it worked well.

I followed the directions to the T.  It was very good. Enough for a filling bowl for three people, lunch the next day for three people and an itty bitty second bowl for me as I doled out the lunch portions.