Seeing The Goonies in Cascade Cave (part of Carter Caves in Carter County Kentucky) started by seeing an event notification on Facebook. A number of my adventures start that way.  I will click “interested” and as the reminders come in I evaluate my interest and proximity to the event.  If the stars align, I go all in.

The stars aligned with this event and I am so pleased.  Friends of Carter Caves set up the event.  Cascade Cave is one of a number of caves in the Carter Caves State Resort Park located in Carter County Kentucky. According to the Resort Website: “In 1959 Cascade Cave, once privately owned and operated, became a part of the Carter Cave State Park System. Shown to visitors since 1925, the cavern is made up a series of parallel passages. They are filled with dripstone formations of different types. The entrance to Cascade Cave is located on the side of one of the many sinkholes in the area. Highlights of the cavern include “Counterfeiter’s Room” named for the supposed use of the cave by counterfeiters. The “Lake Room” is so-called for the large pool of water located there. Other interesting points in and around Cascade Cave are: “Cathedral Room”, “The Hanging Gardens of King Solomon”, “Cardross Castle”, “Ice –capped Mountains”, and “Temple Bells.” Cascade Cave also has a beautiful 30 foot underground waterfall.”  The history of the caves can be found: here.

If you are unfamiliar with The Goonies defriend me now. Just kidding…but no, really… It’s a staple in our household.  Mander loved it as a kid.  She and her friends each took a name from the movie.  She was Data. The movie details according to IMDB are: “In order to save their home from foreclosure, a group of misfits set out to find a pirate’s ancient treasure.”  It’s a Spielberg classic staring Sean Astin.  And, those of you who know me well and follow my blog or Twitter know that I believe #SeanAstinIsProudOfMe. Ok, not in a creepy way – I met him, posted a blog about it and gave you the details once. Rememeber?…  Sean Astin Blog.

We arrived at Carter Caves only to realize that Cascade Cave is about ten miles away.  No worries, we walked one of the shortest trails and saw some of the natural beauty there is to offer there.  I fell down and hurt myself.  I had mud on the seat of my pants (and like an 8 year old, worried about how many “did she poop her pants” references were being made – then I got over it). We drove to Cascade Cave using directions givent to us by a store attendant, found it without issue.  We arrived thirty(ish) minutes prior to showtime.  Parking was tight.  A large number of people parked along the road.  We lucked out and found a spot in front of the port-a-potty.  (NOTE to runner friend’s: Here I thought it was runners who had the worse port-a-potty mishaps – I was grossly mistaken.)  This event is a BYOC (bring your own chair) and they suggest a jacket as the temp of the cave is usually 60 degrees.  We had both in hand as we made our way to an already long line.  There were people at the front who had been there since 3:00 PM.  Wow.  It was mentioned by a ranger that the event could hold about 220 people comfortably.  The 6:00 PM showing was at full capacity.  We were about mid-cave (even after arriving only 30 min prior).  It was filled with little kids.  Parents are rude.  A mother put her kid’s chair on my toes and kept insisting that he sit “RIGHT HERE”.  Ugh.  Because little people were present, I reeled in the “I will cut you” thoughts.  While Renau stayed with the chairs, I made my way to the popcorn line.  They sold mini candy bars, popcorn and sodas.  The popcorn was $1 per bag.  We brough a back pack of snacks/drinks (movie candy purchased at the Walmart).  The first thirty minutes or so of the movie had a number of snack paper rustles/kids whispering/parents barking orders that were a FEW times a bit much.  But soon everyone was enthralled by the movie, lights dimmed and volume turned up.  The kids laughed at the right spots (penis broken off the statue – bad guys getting hit in the junk with a log – Sloth saving the day).  It was a great time.  Because we were not encumbered by tricycle motors – we were able to grab our chairs and be two of the first people out of the cave and headed to the cars.  Because of some bat disease that could be passed along to other bats that we encounter (um…when does that ever happen?!?) we had to drag our feet across a wet mat to remove cave soil from the soles of our shoes).  Once in the parking lot, the cars coming in for the next show bound up the traffic of people leaving the first show.  I may have called a driver a name or two.  Mumbled them…

All-in-all amazing event.  Loved it.  The only advice for the coordinators is maybe having someone direct parking traffic between shows.  That is the ONLY downside (and that was minor).

They have another showing on the 23rd – I hope its Indiana Jones!  Indy in a Cave! Could you imagine?  See it if you can!!

Here are some pics (blurry, in the dark, iPhone pics).  It gives you a better idea of the event. 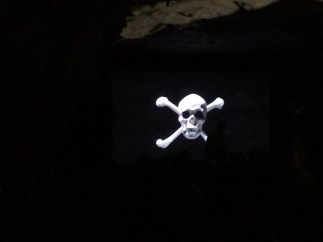 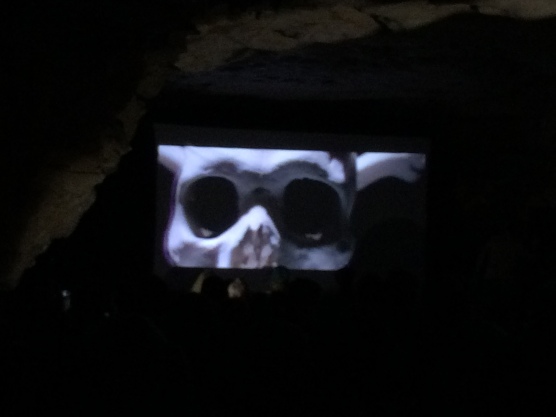 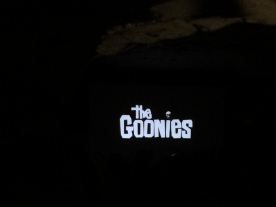 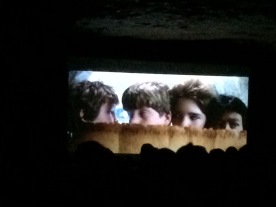 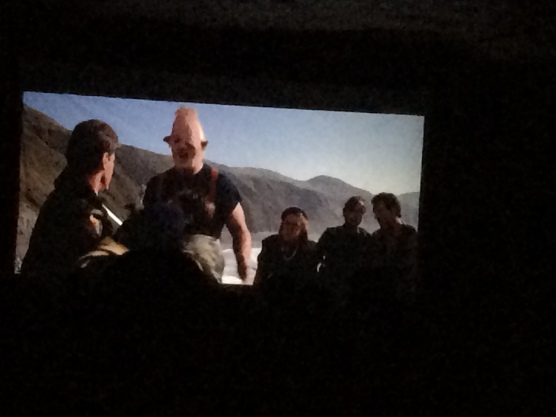 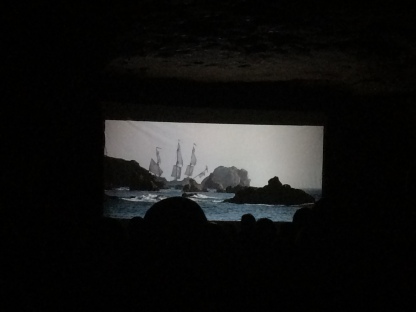