My summer has been amazing thus far. Keeping up with my blogs, has not been…

My Palatial Comrade Ben (palatial comrade sounds better than best bud) and I journeyed once again to our state capitol to take in some Art and some Mountain Stage.  While enjoying Festivall we stopped to admire the work of our friend Mike from Mountain Artworks.  If you get a chance, swing by Tamarack in Beckley and check out his art!  So PROUD of him!!  We then enjoyed an AMAZING meal (Flock of Tacos) at Black Sheep Burritos and Brews.  If you have not eaten there – get up from your laptop, get into your car and drive there NOW!  LOVED IT!  After we gluttonously filled our bellies we headed over to Mountain Stage.  I have yet to be disappointed with this venue.  For those of you who love music that has not been shoved down your throat by mainstream radio – this is a venue you MUST try!!  For a measly $20 you are given a ticket to amaze-land.  I usually have a particular band that I am fond of and am hoping to see in a small venue.  However, this time it was Ben who chose the show.  I am thankful that he did. 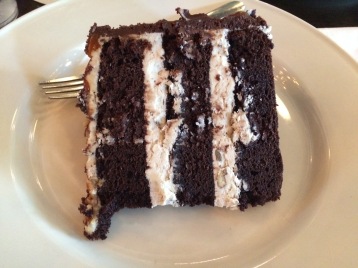 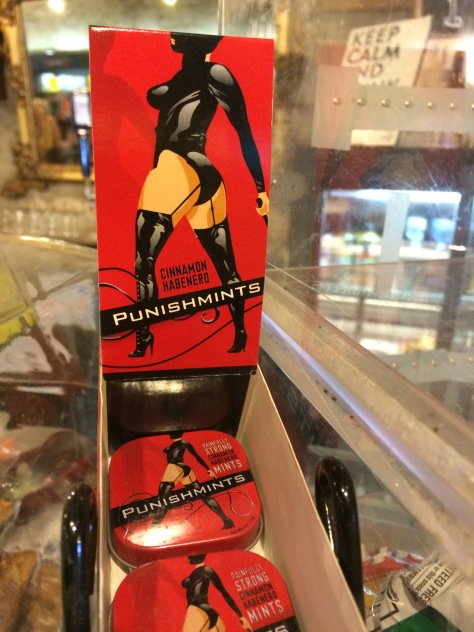 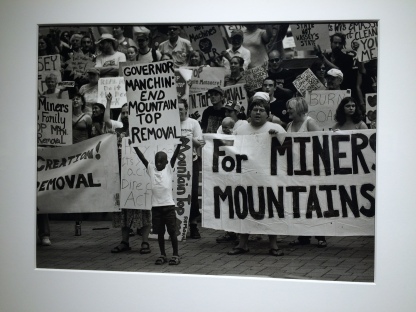 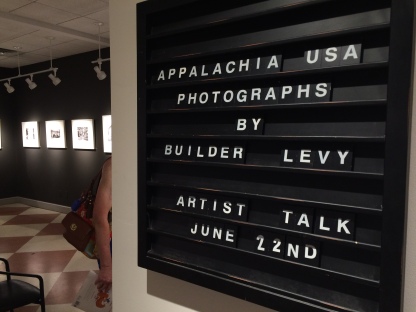 In all of the tapings of Mountain Stage, there has only been two instances where Larry Groce was not the host.  June 26, 2016 (the taping we attended) was one of those two instances. Joni Deutsch was the host that night and put on a stellar show.  We spoke with her after the show.  What a warm and wonderful woman with an apparent love of all things music!  You can connect to her weekly show here: A Change Of Tune.  I also enjoy (very much) her Insta account: JoniDeutschInsta. 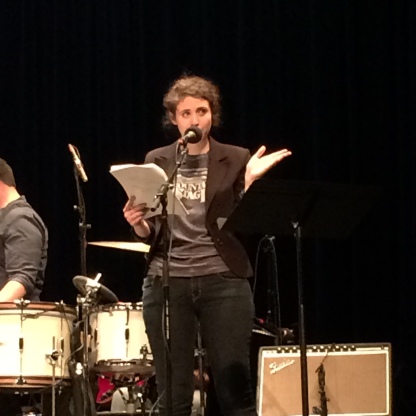 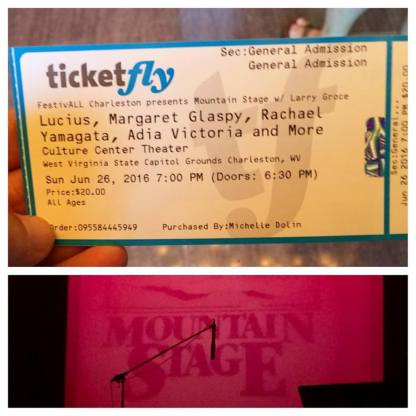 Margaret Glaspy was first up. She is a bold and unique young woman who draws you in with her mesmerizing moves and holds you there with her voice which commands attention.  While she sang, she would exchange looks with her guitar player and I felt as if I was standing just outside of an inside joke – the joke being that I am only hearing her voice now and wondering how that can be.  I have since added her to my Spotify and my fave of her songs is “You and I”.  A sampling of the song in a Grand Street Session is here: 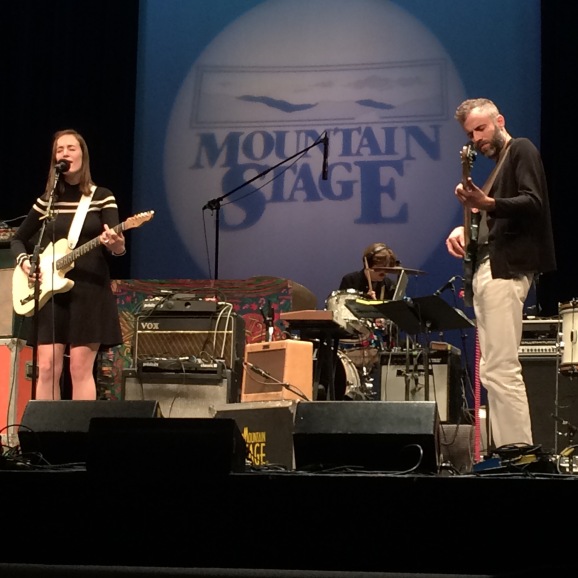 Per her MTV bio: “Blending lyrical, introspective songwriting with a raw rock edge, Brooklyn-based singer/songwriter Margaret Glaspy creates a sound that is both intimate and powerful. A native of California, Glaspy relocated to Boston after high school, where she attended the Berklee College of Music. After her scholarship money ran out, she would use her student ID to sneak into master classes while honing her songs and working odd jobs. A subsequent move to Brooklyn yielded new performing opportunities and the release of her debut EP, Homeschool, in 2012. A second EP, If & When, arrived a year later. Citing influences from Joni Mitchell’s iconic Blue album to Weezer’s Pinkerton, Glaspy’s strong command as a vocalist and often bluesy electric guitar skills set her apart from much of the New York D.I.Y. indie scene. After first demoing and then recording her first full-length album at home, she was approached by ATO Records. A deal was struck and she entered a proper studio to re-record the tracks, which were mixed by Shawn Everett (Alabama Shakes, Lucius). Her full-length debut, Emotions and Math, arrived in June 2016.”

Next up was Adia Victoria. Not knowing a thing about the artists prior to their taking the stage, I must say that Adia Victoria has to be the most eccentric of the artists I had seen previously at this venue.  She has a very unique style and while reading up on her background I found a few things that have influenced her: she was raised within the Seventh Day Adventist community. It was not until after her parents’ divorce (when she attended a public high school) that she was exposed to a wider array of music (Kurt Cobain and Miles Davis, to name a few).  After high school, she tried NYC on for size but landed in Nashville where she felt the surroundings were more suitable.  According to her Wiki site: Her personal “look” was noticed by Vogue for its “Afropop” roots.  However, Victoria states that she doesn’t like to be “fetishized” for her looks, saying, “People think that because you are attractive, you owe the world something, to let them consume you.”  She ended the show by laying on the stage.  So different but her voice, in its innocence, is very haunting. 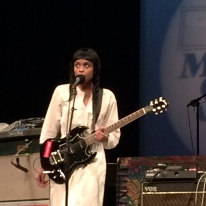 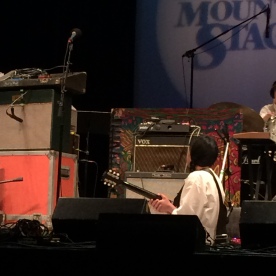 Her Music: The day after Mountain Stage, she went on to record Tiny Desk NPR.  The video is here:

William Matheny was the “and more” portion of the show.  He was a pleasant last-minute addition and represented the local music scene.  Three days previous, West Virginia saw one of the worse floods in its history, leaving the state mourning losses of life and many people displaced. Matheny came on stage to announce that all of the proceeds from the CD he made available for purchase that night would be donated to those affected by the floods.  Decent music, great cause, kudos to this young up and coming musician. 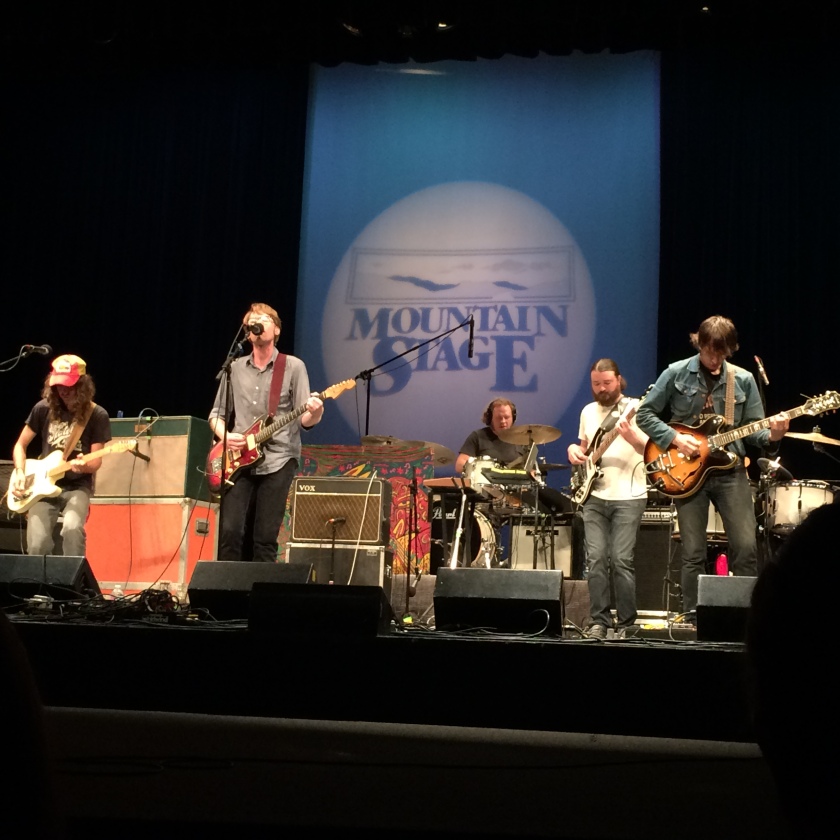 A little sample of William Matheny:

Rachael Yamagata…  Let’s just say: I may have a girl crush on her voice.  She (and her band) was talented and amazing.  She sang in a way that made me feel as if I should have a glass of wine in my hand while looking at the ocean and contemplating deep shit.  She hails from Virginia and started her career with the band Bumpus (note to self: check out that music).  She has worked with the likes of Jason Mraz and Ray Lamontange.  She has an album dropping in September and I have a calendar reminder set to purchase the music right away.  What a joy to my ears.  Give her a listen!

From the show we attended:

Lucius.  I want to use a word to describe them without undermining the enjoyment I found listening to them: quirky.  From their outfits (the most well-coordinated band) to their interactions with each other to the amazing way their voices wove together to form music that makes sense… I thoroughly enjoyed everything they brought to the stage!  Lucius is a five piece Indie-Pop band who hail from Brooklyn, NY (I knew they had that extra specialness to them).  Their new album title is “Good Grief” and you should go buy their music now! 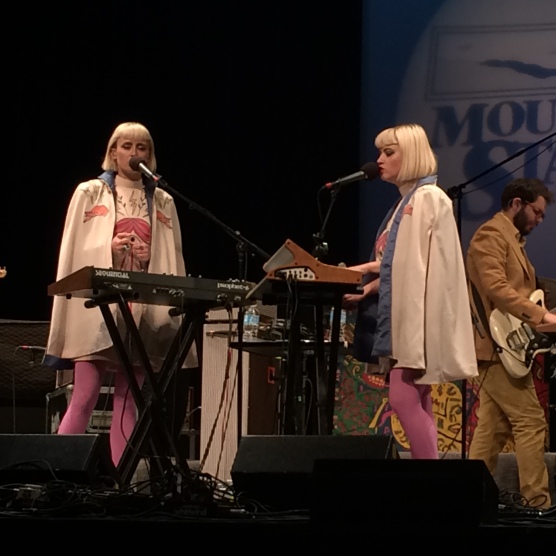 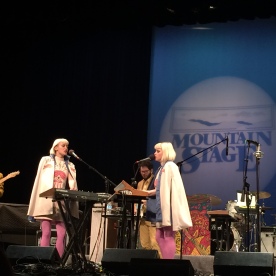 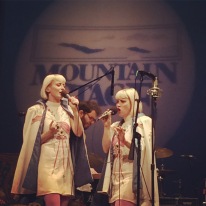 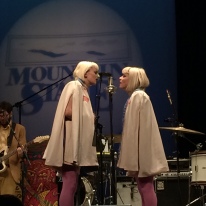 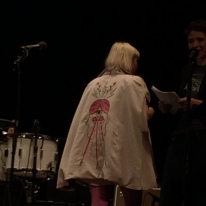 From their FIRST performance on Mountain Stage (not our taping):

It is exciting to see their music on the Showtime original Roadies:

As with every other Mountain Stage taping, they bring the artists out to have a group song. For this taping it was Fleetwood Mac’s Say You Love Me. I will say it, I LOVE YOU.  Loved the group song, loved each of the groups!  LOVE!  Buy their music.

My Pics and My Vid: 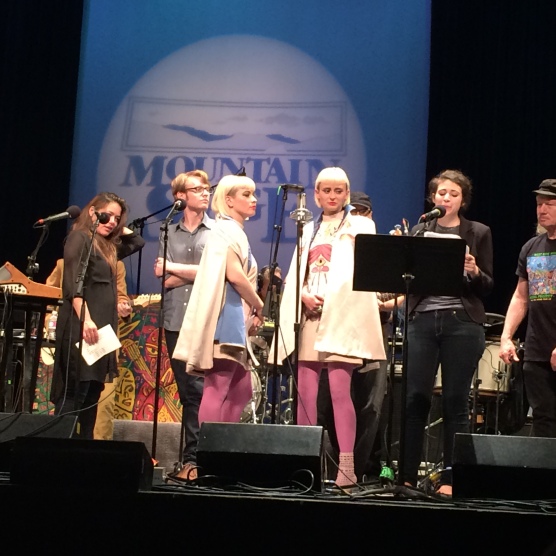 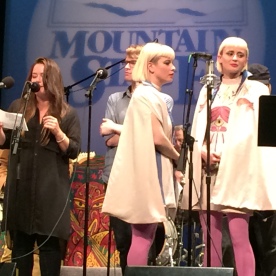 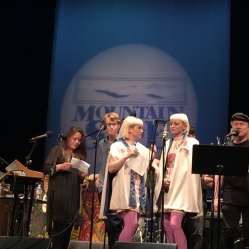 Because I am #TeamSocialMediaWhore, I made sure to do up the Social Media accounts right, taking pictures and video and then posting with the hashtag #GoToWV.  At the end of the night they announced the winner!  C’est moi!

And with the ticket loot from that bag, our next Mountain Stage adventure will be this Sunday when we see Leftover Salmon!  Cannot wait!!

Listen to local music – the groups you hear on the radio had to start somewhere… Let me know what you thought of this selection!

In this pic, we are sitting on the bench of judgement at the after-party:

Extra Pics From Me: 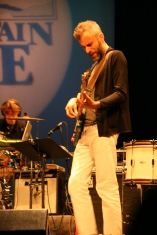 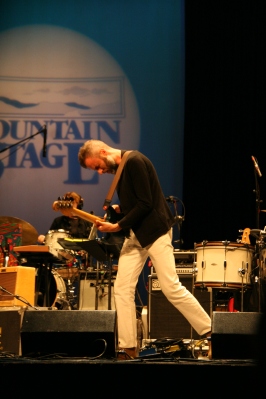 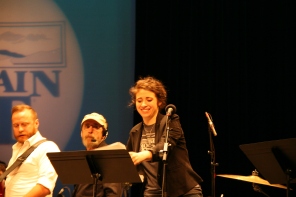 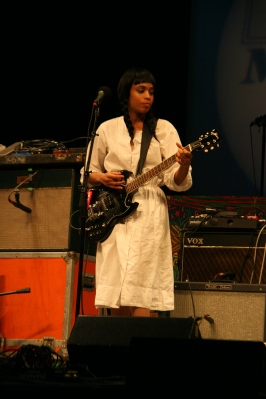 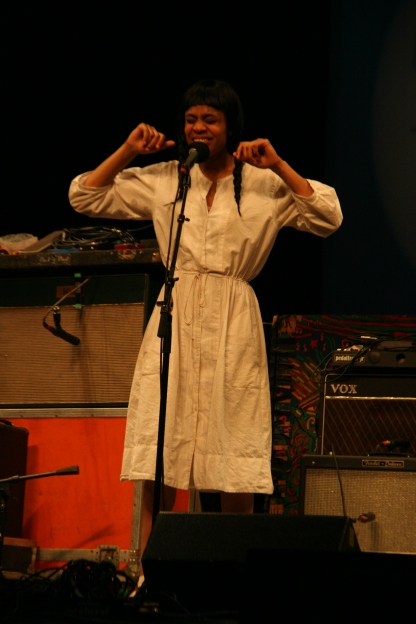 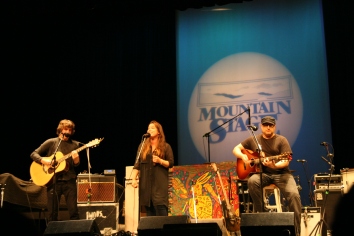 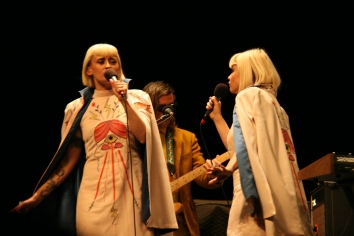 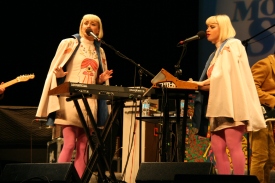 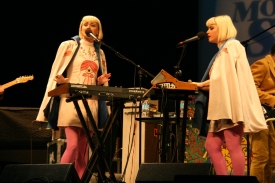 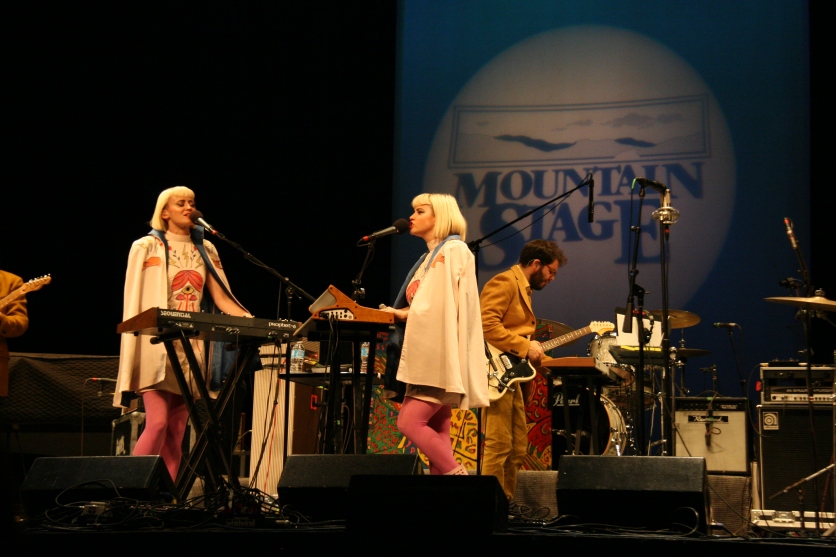