When I realized that you would be at the Cincy Comic Expo, I smiled. My son, daughter and I are all fans for three different reasons: Alex loved you in Lord of the Rings; Amanda had a group of friends while growing up who called themselves the Goonies; and I – well, I loved you for your ability to make me believe that a person can overcome whatever obstacle lies in their way (Rudy).

Several months ago I started following you on Twitter because of your active involvement in the running community. I cheered you on during the Boston Marathon and have been awed by your tackling of the Ironman. It is inspirational to watch you train and to hear the words of encouragement you offer to others. It was no surprise when a young woman, standing in line to ask you a question during the Middle Earth panel, burst into tears as she was able to tell you what an impact you made over the course of her entire life. I explained to my daughter that you are the epitome of motivation in your approach to the world. As young kids moved through the Q&A line you addressed each of their questions in a manner that made me realize what a great parent you must be. You were not demeaning and you spoke to them on their level. And when the moderator of the event said “we have time for two more questions”, you would not hear of it. You said that it was not acceptable that these fans stood in line and would not have the opportunity to ask their question. And so began the speed round of Q&A. Every fan that stood in line had a question answered. And I became an even bigger fan.

We stood in line to meet you at the booth. First up: my daughter (the awkward one) – she asked for a selfie and you took her phone in hand and posed. Then you looked at her and told her she was so pretty and had such a beautiful smile. I asked you what song you listened to while you trained, that I always like to find new running music. For the next few minutes we huddled together while scrolling through your playlist. And although I will not give away its contents, when you played MIA for me – I was tickled. I have since added Paper Planes to my playlist. You asked me what race I would be in (Marshall University Half Marathon) and we spoke of my overcoming plantar fasciitis (with an impromptu showing of your insert, you understand the struggle). As I backed away you wished me good luck and said that you were proud of me. Then my son was up (all the merchandise he could juggle in hand for signing) and you had a lengthy conversation with him regarding Sam’s handing over the ring and his hesitation – not in wanting to keep it for self-gain but for fear of his friend being hurt in the undertaking. You spent fifteen minutes personally with my family and were able to speak to each of us in a way that allowed us to feel appreciated as fans.

The real reason I started following you (as a runner) on Twitter is because I love the sport and I am not that great at it. That is where your Rudy character comes to play. Good Catholic kid, just trying to participate in a sport where he is not the “best”. Aside from the foot issue, running is a struggle for me. When I ask a person for a song suggestion, I will listen to that song as I run and then think of them. Think of the impact they have had on my life. Think of the joy offered to me by just knowing them. It makes the miles easier to conquer.  When Paper Planes plays in the ole earbuds, I will think of you, Sean Astin, and how you made my family (the pretty girl, the LotR fan and the “not the best” runner) smile and feel appreciated. So when you see the hashtag #SeanAstinIsProudOfMe – well, that’s me saying “Thanks Rudy”.

Michelle Dolin (The fan who is mad she did not get a selfie with you!) 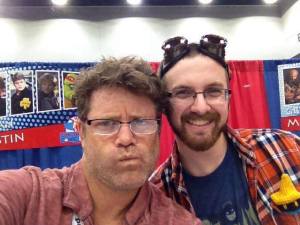 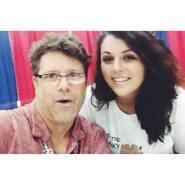 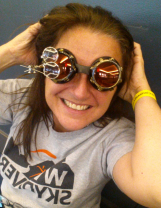 More Photos
Seeds will always find a way to grow with enough sunshine and nurturing. No matter where they fall. Same could be said for life in general. Plant seeds of love today. Appreciate what comes from the fruit of your efforts. Think of what you can do to enhance the growth. Don’t judge where they decide to sprout. As for these beauties, the popped up from deadhead seeds on my patio. I moved a tiny camper over to protect them from being unintentionally trampled and to offer support. They are small but by God they are beautiful! #SowLoveNotHate #SowLove #PlantLoveAndWatchItGrow
Cotton Candy Sunset