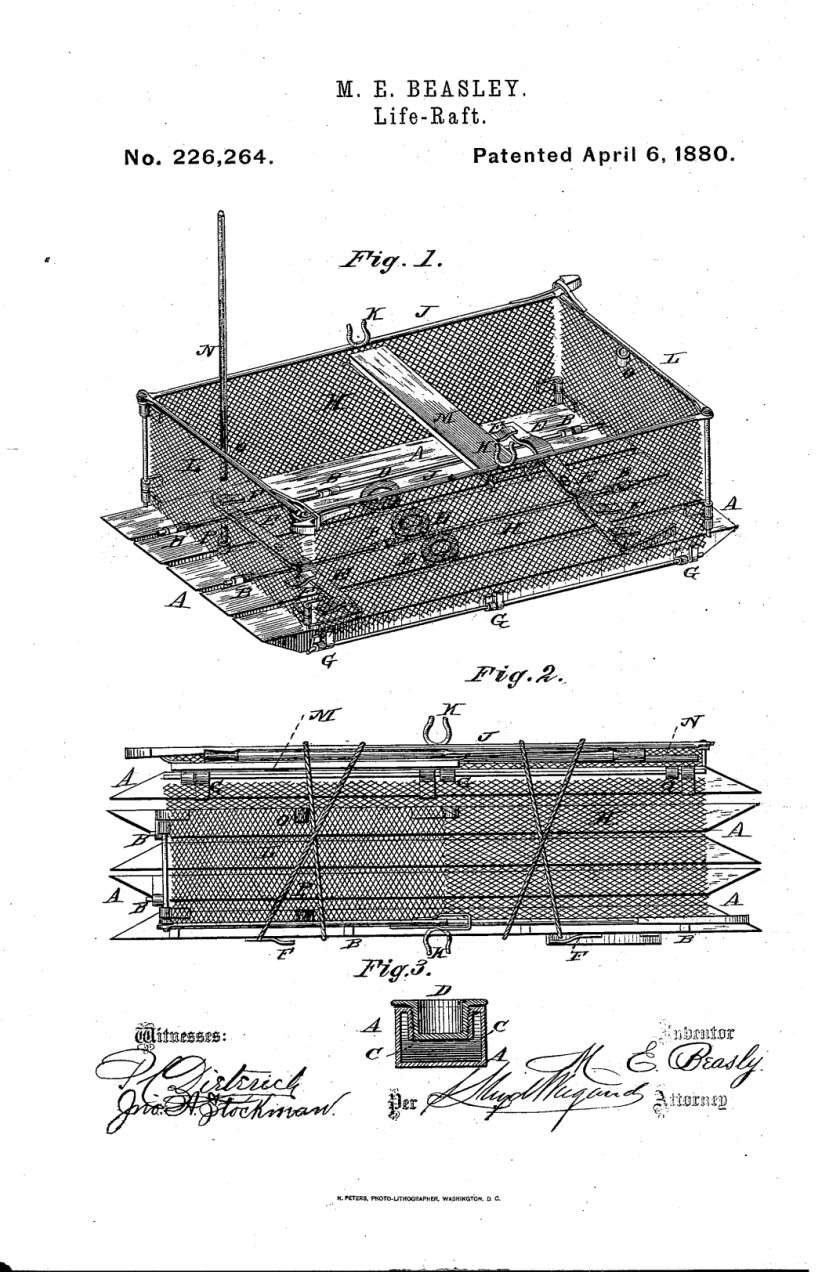 This year I have gravitated more to the female inventors through history. Those women with the creative foresight to invent things to improve the world’s quality of life. Let me introduce you to Maria Beasley…

Maria E. Beasley (née Kenny; 1847–1904) was an entrepreneur and inventor. She is best known for her barrel-making machines and her improvements to the life raft. She held fifteen different patents in the United States and two in Great Britain.

Footwarmer: In 1878, Beasley patented her first innovation, a footwarmer. It uses a chamber of water that is heated by either the direct flame or heat from a lamp. Two pipes are used to clear the smoke generated by the lamp and the steam generated in the water heating chamber. The chamber of water lies directly underneath the upholstered surface upon which the user rests their feet. Due to the fire risk of the open flame of the lamp, Beasley mounts the lamps on small structural supports that can be moved in and out of the chamber through a door. The lamps also will right themselves if the footwarmer is overturned, further reducing the chance of a fire or explosion.

Barrel-Hooping Machine: In 1881, Beasley won her first patent for a barrel-hooping machine, followed by a second version in 1882. Her machine is designed to fit hoops tightly onto both sides of the barrel simultaneously, using two reciprocating heads, firmly-secured “hooping-toes” to guide the hoops, and a combination of springs, screws and levers. Her updated patent aims to account for differences and imperfections in the shape of barrel staves and hoops; it uses radially-adjustable arms and jaws to hold materials more firmly in place.

Life Raft Design: Beasley was awarded two patents for an improved life raft, one in 1880 and the other in 1882. Beasley’s raft uses a base of collapsible metal floats that is more flexible and makes storage onboard a ship easier, also including airtight containers to protect perishable provisions. In her updated design, she makes it so that the raft can be used reversibly with greater ease (in case of accidental overturning) by adjusting the surface of the metal floats and including an adjustable guardrail.

Although some internet sources claim that Beasley’s life rafts were used on the RMS Titanic in 1912, saving hundred of lives, author David H. Cropley is critical of the credibility of this claim. The Titanic carried lifeboats, not life rafts. While four of the ship’s lifeboats used collapsible canvas designs, they do not appear to be based on Beasley’s design, and, regardless, the small number of collapsible lifeboats would not have been enough to save the hundreds of passengers cited in the stories.

Anti-Derailment Device for trains: In 1898, Beasley was awarded a patent for a “Means for preventing derailment of railroad-cars”. As higher train speeds were now attainable by the use of electric power, train tracks needed additional safeguards to reduce the possibility of derailment. Beasley’s anti-derailment device is a combination of a guardrail and locking device. The guardrail uses a strong top flange (a protruding edge or rim), located at the inner side of the track rail, which engages with a detent (a mechanical catch) connected to the train. In the event of a train car about to derail, the detent and flange prevent the car from leaving the track and restore regular motion. The detent must be rigidly framed in position to avoid the risk of straining and being wrenched from its fastenings.