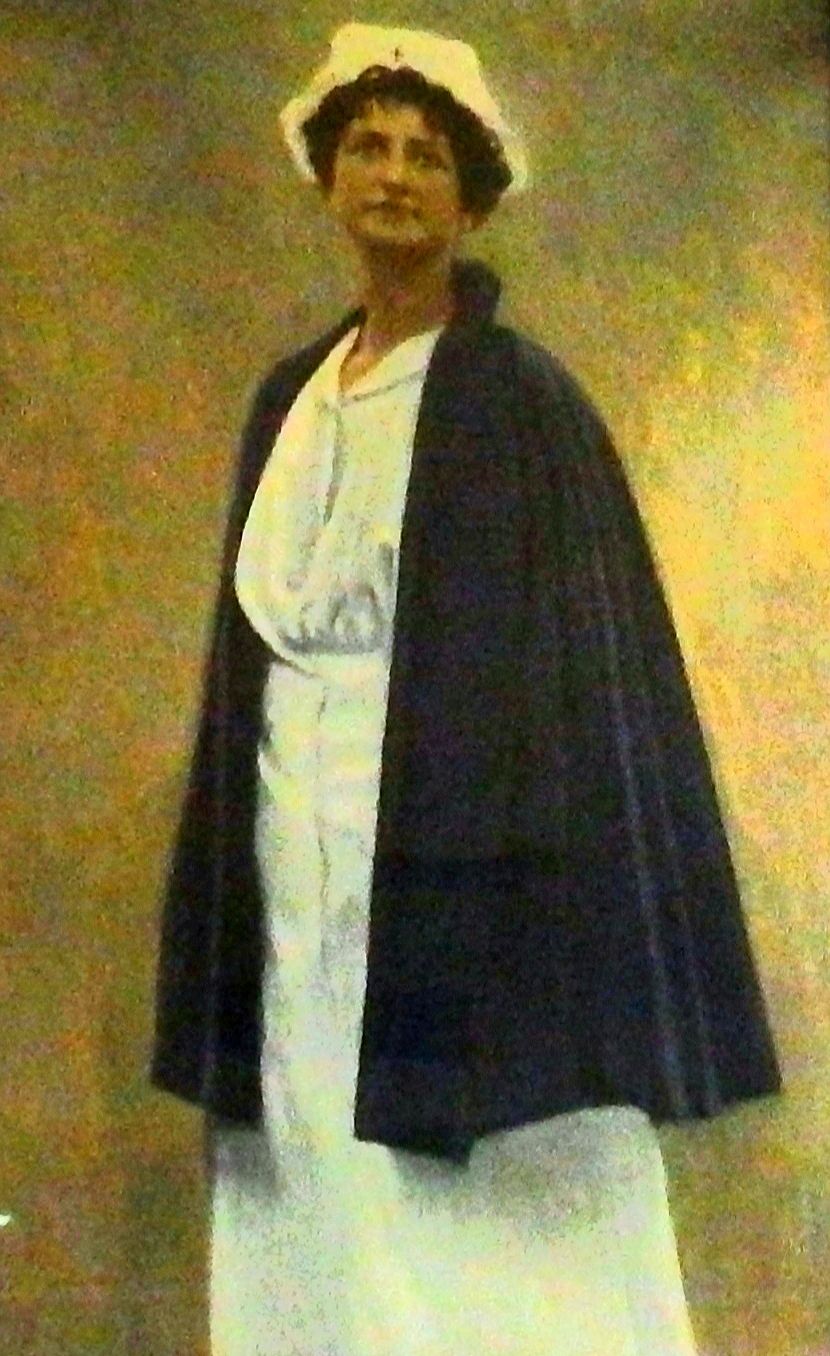 Lucinda Lovie Rose bears the unique distinction of being the only female West Virginia casualty of World War I.

Lovie Lucinda Rose was born August 15, 1889, in Doddridge County, West Virginia, to Mary Josephine Strother Rose and David Van Rose, a farmer. In June of 1900, the family is found in Braxton County. David Van Rose is listed as a merchant in the 1900 Federal Census. All of the children, except Jasper, age 5, and Clyta, 20, are said to be at school.

By 1910, Lovie Rose was known by her middle name, Lucinda, a name that belonged to her mother’s mother. The census lists only four of the seven children still at home in Orlando Village, Braxton County. David is listed as a teacher, employed in the school system. Community researcher David Parmer writes:

Parmer notes that Lucinda Rose won a silver medal for her oratory skills when she competed in a Women’s Christian Temperance Union contest in 1909. She would have been 16 years old. Prior to her nursing studies, Lucinda Rose was an assistant to the postmaster at Burnsville in 1910. Her brother-in-law was the postmaster there during 1910-1914. (“Lucinda Rose: Angel of Mercy,” Orlando, West Virginia, 1 December 2016, http://orlandostonesoup.blogspot.com/2009_03_01_archive.html.)

By 1914, Lucinda Rose had graduated from her nursing studies at St. Mary’s Hospital in Clarksburg. She began her nursing career in Shinnston, as did her sister, Clyta. Parmer writes that Lucinda was well-liked throughout the Shinnston area. In April 1918, Lucinda Rose volunteered for overseas service as an American Red Cross nurse. She first served at Camp Wadsworth near Spartanburg, South Carolina. Nurses at Camp Wadsworth who were assigned to a European tour usually served in France. Lucinda Rose was at the camp for six months and then began her voyage in September 1918. (“Lucinda Rose: Angel of Mercy,” Orlando, West Virginia, 1 Dec 2016, http://orlandostonesoup.blogspot.com/2009_03_01_archive.html.)

Nurses were needed, and the women who answered the call for service in the Army Nursing Corps, in the Navy, or in the Red Cross were able to help in ways no one else could. One can only imagine that Lucinda Rose must have felt the same way. She volunteered to be a nurse with the Red Cross overseas four years after the Mercy Ship sailed. The hardships that awaited those who dared volunteer would not have been a secret in the nursing community, yet she did volunteer. No record could be found indicating which ship carried her across the Atlantic or who else was on board. What is known is that the year was 1918, three years after typhus ran rampant in battlefields and hospitals in Europe. It was the year of the Pandemic, of the Spanish Flu, of La Grippe. (“Lucinda Rose: Angel of Mercy,” Orlando, West Virginia, accessed 1 December 2016, http://orlandostonesoup.blogspot.com/2009_03_01_archive.html.)

The ship that sailed with Lucinda Rose aboard was only shortly on its way before those aboard started becoming ill. Lucinda Rose began caring for the sick, day and night, throughout the voyage. She had little opportunity for rest, and became ill. She died upon reaching England. On November 21, 1918, the Shinnston News carried her obituary:

Miss Lucinda Rose, R. N., daughter of Mrs. M. J. Rose of Clarksburg and a sister of Mrs. Clyde [Clyta] Rose Furbee, former resident of Shinnston, died at Portsmouth, England, October 9th. Miss Rose was known to a number of East Shinnston people, having spent some time there with her sister a few years ago.

The Rev. King of the First M. E. church of Clarksburg visited her at Camp Wadsworth last summer and in a beautiful letter of comfort to her mother, spoke of her high standing in the Red Cross work there. One of the very best and most devoted they had, as stated by the department.

She was a graduate of the St. Mary’s Hospital and one of Clarksburg’s most popular nurses, widely loved for her sweet, sunny disposition. One more of West Virginia’s daughters has made the ultimate sacrifice.

Following the obituary was a military notice of her death from the American Red Cross in Winchester, England. Addressed to Mrs. M. J. Rose, it stated that Lucinda Rose had died at the W. S. Military Hospital in Portsmouth, and that the burial had taken place at Morn Hill, a military cemetery. Funeral services were performed by a military chaplain. Lt. A. W. McMillar wrote: “I can assure you that your daughter was cared for in her last hours by a competent staff of sympathetic surgeons and nurses who did every thing possible for her in a fully equipped hospital.” The letter contained details of the service, including the military honors, the volleys fired, and the playing of taps. Morn Hill was said to be a beautiful spot. Lucinda Rose was laid to rest next to her several of her comrades, overlooking “many miles of lovely English country.” The Clarksburg Telegram carried a similar notice.

The Harrison County, West Virginia, register of deaths for 1920 contains an insertion that notes Lucinda Rose’s death in 1918, listing her as a 25-year-old nurse who died in France. It should be noted that this information was provided by an undertaker and appears to be in error. Another source indicates that England issued a death certificate, noting that she died in Portsmouth District, England, at the age of 29, which is consistent with Lucinda’s birth date.

Many nurses who started their journey at Camp Wadsworth were going to France at that time, and perhaps Lucinda Rose’s family or others in the community knew that France was her ultimate destination and assumed it was there she died. If so, she didn’t make it there. She died in Portsmouth, Hampshire, England. This source accessed December 2, 2016, indicates Lucinda was first buried in a military cemetery in Morn Hill near Winchester, England, in October 1918, which is consistent with the information that places her death in England. In 1920, her remains were returned to West Virginia, which accounts for the insertion in the Harrison County register of deaths. She was buried in Green Lawn Cemetery, near Clarksburg. (“Lucinda Rose: Angel of Mercy,” Orlando, West Virginia, accessed 1 December 2016, http://orlandostonesoup.blogspot.com/2009_03_01_archive.html.)

Harrison County Wills, 1788-1970, available from Ancestry.com, notes that Lucinda Rose’s will was probated on January 9, 1919. In April of 1918, Lucinda Rose had signed her will, in which she bequeathed her worldly possessions to her mother, Mary Rose.

According to the U.S. Army Center of Military History, during World War I, the peak strength of the Army Nurse Corps reached 21,480 on November 11, 1918. Several nurses were wounded, but none died as a result of enemy action. There were, however, more than two hundred deaths largely caused by influenza and pneumonia. Armistice Day didn’t end the service of many nurses serving the military. Nurses served with the occupation forces in Germany until the American forces were returned in 1923. (Carolyn M. Feller and Debora R. Cox, “Highlights in the History of the Army Nurse Corps: Chronology,” 19 January 2001, accessed 6 December 2016, http://www.history.army.mil/books/anc-highlights/chrono.htm.)

On the same pages as the announcement of Lucinda Rose’s death in the November 21, 1918, Shinnston News was that of another, named James Knight, who also died of influenza after the onset of pneumonia. Elsewhere that year in West Virginia, in Barbour County, the Democrat announced the sorrowful news of the death of an eight-year-old girl, following the same fate as her mother, and the devastation left for her father, as both died of pneumonia. In the Republican, the death announcement of a 31-year-old woman followed that of Private Clayton Brandon. The woman died of “influenza pneumonia,” as had Private Brandon, who was buried at sea.

The American military experience in World War I and the influenza pandemic were closely intertwined. The war fostered influenza in the crowded conditions of military camps in the United States and in the trenches of the Western Front in Europe. The virus traveled with military personnel from camp to camp and across the Atlantic, and at the height of the American military involvement in the war, September through November 1918, influenza and pneumonia sickened 20% to 40% of U.S. Army and Navy personnel.. Influenza and pneumonia killed more American soldiers and sailors during the war than did enemy weapons..

The Army and Navy medical services may have tamed typhoid and typhus, but more American soldiers, sailors, and Marines would succumb to influenza and pneumonia than would die on the industrialized battlefields of the Great War. The story of the influenza epidemic in the military is often lost in the historical narrative of the Great War, included merely as a coda to that four-year horror, coinciding with the final battles and the Armistice..

Influenza sailed with American troops across the Atlantic and when it exploded in late August and September in Europe and the United States, medical officers found themselves on the front lines of an epidemic worse than any of them had ever seen or imagined. Many were among the most knowledgeable and skilled physicians in the country and had just recently entered military service. They did their best to save those stricken by influenza, but could do little more than provide palliative care of warmth, rest, and a gentle diet, and hope that their patients did not develop pneumonia.

One of the tragedies of the influenza epidemic is that by the 1910s, the medical profession held many of the scientific and epidemiological tools to understand the nature and extent of the damage influenza and pneumonia were wreaking on their patients, but lacked the tools to effectively fight them.

In 1930, West Virginia Governor William G. Conley traveled to Clarksburg to honor Lucinda Rose. A portrait of Lucinda Rose was dedicated to the Lucinda Rose Auxiliary of the Veterans of Foreign Wars. Governor Conley’s address is contained in the State Papers and Public Addresses of Wm. G. Conley, Governor of West Virginia, March 4, 1929 to March 4, 1933. (Jarrett Printing Company, 1933 [digitized University of Michigan 18 October 2007]: 97-99.) His remarks honored the whole family and the community that had so remembered her.

In 1944, Lucinda’s mother, Mary, died in Huntington. Her remains were buried in Green Lawn Cemetery near Clarksburg. A “D. V. Rose,” who was a minister, died in Clarksburg on October 8, 1912. If Lucinda’s father, he died just a day removed from six years before Lucinda. Governor Conley’s speech referenced Lucinda’s father as having survived her, but newspaper death notices refer only to her mother, and the Clarksburg city directory for 1917 lists Mary J. as the widow of David V. Rose.

The Lucinda Rose auxiliary of the Meuse-Argonne post of the VFW still exists. In 2013, Bob Stealey wrote for the Clarksburg Exponent: “The Meuse-Argonne Post of the Veterans of Foreign Wars was founded in Clarksburg on December 9, 1920. Seven of the charter members:Fred Burka, Nick Carter, Homer Rector, Fred McFarlin, Frank Underwood, Leslie Graves and M. McIntyre:were honored at a dinner on the 30th anniversary of the post on December 9, 1950.” The newspaper also reported that a few years before its 30th anniversary, the post:with more than 1,000 members:ranked first in memberships of all the posts of the organization in West Virginia. Said Stealey, “The auxiliary of the Meuse-Argonne Post of the VFW was named for Lucinda Rose, who graduated from the St. Mary’s Hospital School of Nursing in 1914 and worked in private practice until April 15, 1918, when she enlisted as an Army nurse.” (“Several Veterans Organizations Were Born in Clarksburg,” Clarksburg Exponent, 11 November 2013.)