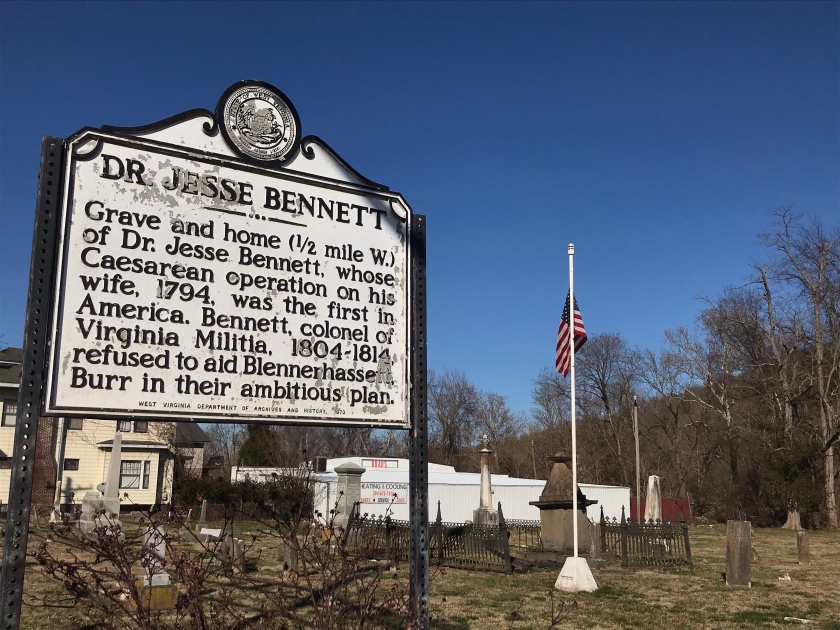 Bennett was born in Frankford, Philadelphia, on July 13, 1769. He earned a B.A. Degree at Philadelphia College before apprenticing with Dr. Benjamin Rush and attending medical school. In April 1791, he received the title Doctor of Medicine, at the same time he received his M. A. degree. Dr. Bennett married Elizabeth Hogg in 1793 and settled in Rockingham County, Virginia, establishing his practice in a log cabin. When Elizabeth became pregnant, Bennett engaged a Dr. Humphrey of Staunton, Virginia, to attend Elizabeth at the delivery.

After Elizabeth had endured a prolonged labor, Dr. Humphrey and Bennett determined the only options were a Caesarean section on Elizabeth or a craniotomy on the unborn infant. Dr. Humphrey refused to do anything, feeling that either operation meant certain death for both the mother and her infant. It appears Dr. Humphrey then left the Bennett home.

Desperate to save her child, Elizabeth begged her husband to perform the Caesarian section. Dr. Bennett assembled a crude operating table from two boards supported by barrels. Dr. Bennett gave his wife laudanum to make her sleepy and had two negro servants support her on the table while Elizabeth’s sister, Mrs. Hawkins, held a tallow candle to light the makeshift operating table.

Dr. Bennett cut his wife’s abdomen with a single sweep of his knife and extracted his infant daughter, Maria. He then removed both of Elizabeth’s ovaries, saying he’d “not be subjected to such an ordeal again.” Finally he sutured the surgical wound with stout linen thread, the kind used in frontier homes to sew heavy clothing.

Elizabeth recovered and was able to be up a month later. Dr. Bennett declared his wife healed as of March 1, 1794, writing a cryptic case history on the title page of one of his medical books. Elizabeth Bennett lived for thirty-six more years, passing away on April 20, 1830. Maria Bennett lived until 1870, married twice, and bore six children.

Dr. Bennett refused to publicize the details of the surgery during his life. He said other doctors would never believe that a woman could survive this hazardous operation, done in the backwoods of Virginia, and he was “damned if he’d give them a chance to call him a liar.”

Because Dr. Bennett didn’t report the operation during his life, it was long believed the first successful American Caesarian section had been performed in 1827 by Dr. John Lambert in Ohio – coincidentally, only ten miles from Dr. Bennett’s practice.

Dr. A. L. Knight, a boyhood neighbor of the Bennetts, remembered hearing the details of Maria’s birth when he was a youth. Dr. Knight collected eye-witness testimonies from Mrs. Hawkins and the surviving negro servant after Dr. Bennett’s death and published the story in The Southern Historical Magazine in 1892 as part of “The Life and Times of Dr. Jesse Bennett, M.D.”

Aaron Burr reportedly tried to enlist Dr. Bennett’s help with the Burr conspiracy for which Burr was charged with treason. Dr. Bennett refused to assist Aaron Burr and went on to serve the United States as an Army Surgeon in the War of 1812.

Mason County Memories: The death of a doctor

The death of a doctor

By Chris Rizer – Special to the Register

There are many famous names in Mason County’s history books, but just as many are often overlooked. Of them all, the one most deserving of recognition is likely Dr. Jesse Bennett.

Bennett was born in Frankfort, Penn. on July 10, 1769 to an upper-class family. Because of this, he began school at the age of 4, and continued his education until he finally earned his Bachelor’s Degree from Philadelphia College. After this, he turned his attention towards medicine, and studied under Dr. Benjamin Rush, a professor at a medical college and later a signer of the Declaration of Independence. By the age of 21, he had earned the degree of Doctor of Medicine. Unwilling to compete with friends and colleagues, Bennett chose to practice elsewhere.

He soon found himself in Augusta County, Va., where he gained the acquaintance of Peter Hogg and his daughter, Elizabeth. Hogg was one of the original land grantees in Mason County, for his service in the French and Indian War. By the spring of 1793, he and Elizabeth were married, and they moved to Rockingham County. It was during their time here that Dr. Bennett performed his most important surgery.

On Jan. 14, 1794, his wife went into labor, and Dr. Bennett called upon Dr. A. Humphrey of Staunton to attend to his wife. It was decided that the baby could not be delivered naturally, and the two doctors determined that the only two options were a Cesarean Section or a craniotomy (removing part of the child’s skull). Because it was likely that someone would die either way, Dr. Humphrey refused to assist and stepped out. Elizabeth, believing that she would die anyhow, begged her husband to perform the C-section to save their child’s life. Reluctantly, Dr. Bennett gave his wife a large dose of laudanum (opium) and placed her on a table made from two barrels and some boards. He was assisted by Elizabeth’s sister Nancy, who held a candle for him, and two female slaves, who held his wife down. With a long slice, Dr. Bennett cut open his wife, removed the infant and his wife’s ovaries, and stitched up the wound with heavy linen. According to his sister-in-law, Bennett removed his wife’s ovaries so that “he’d not be subjected to such an ordeal again.” Within two months, Mrs. Bennett was fully healed, and her husband had officially performed the first successful C-section in the Americas. However, Dr. Bennett never publicized his success, thinking other doctors would never believe him and “damned if he’d give them a chance to call him a liar.” The only written reference was a notation referencing a procedure on E.B. on Jan. 14, 1794 where she was cured by March 1. Details of the surgery were collected by Dr. A.L. Knight of West Columbia in 1842 from two witnesses, Elizabeth’s sister and one of the female slaves.

For a short time after this, he served as a surgeon during the Whiskey Rebellion.

In 1797, the Bennetts moved to Mason County and settled on the land of Elizabeth’s father. Here, Dr. Bennett served as a major of the Mason County militia in 1804, and in 1805, he was approached by Aaron Burr and Harmon Blennerhassett, who tried to enlist Dr. Bennett’s help in a plan to overthrow the United States’ government. The doctor allegedly trusted Blennerhassett, but he was suspicious of Burr, and turned down their offer. After their meeting, he buried all of the militia’s weapons to keep them out of Burr’s hands. In 1808 and 1809, Bennett represented Mason County in the Virginia Legislature.

In 1812, he enlisted in the Mason County Riflemen as a surgeon and accompanied the unit to Fort Meigs. After this war, Dr. Bennett resumed his practice and work on his slave plantation above Point Pleasant. He died on July 22, 1842 (exactly 175 years ago), and was originally buried in the Bennett Cemetery on his property. However, he was exhumed in 1985 and reburied in Pioneer Cemetery.