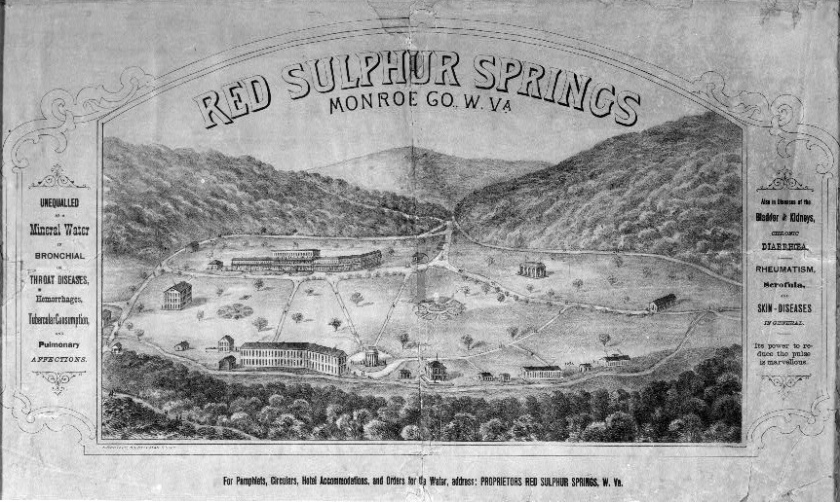 I had heard of White Sulphur Springs and (I believe) Green Sulphur Springs. Now, Shirley Donnelly has reached out from the past to let me know there was also a Red Sulphur Springs in Monroe County WV. This blog includes pictures, information, Rev Donnelly’s column and some additional reading materials on the resort that once stood grander than that of the Greenbrier.

Red Sulphur Springs was known as a watering place since 1800. The springs were purchased by Dr. William Burke of Richmond in 1830, who built a hotel to accommodate up to 350 guests. Among the notable guests to the springs were Chief Justice of the Supreme Court Roger Taney and Francis Scott Key. The resort was disrupted by the Civil War. Ownership passed to Levi Morton, who had been Vice-President of the United States under Benjamin Harrison. He expanded the hotel, but the resort eventually failed. It was sold during World War I and divided into parcels, and the buildings demolished.

One of the state’s noted 19th century resorts, Red Sulphur was at one time considered second only to White Sulphur in the extent of its accommodations, which included a piazza 475′ long connecting the various cottage rows. In spite of such amenities Red Sulphur was never considered as socially correct as its neighboring spas. During the Civil War, the Buildings served as a Confederate hospital. The resort was owned by Vice President Levi P. Morton at the turn of the century.

And of course, my favorite hometown historian wrote a column on Red Sulphur Springs. I will transcribe Shirley’s columb beneath the clipping.

Like and idle beggar sunning, are the ruins of Red Sulphur Springs. It gave me an eerie feeling when I passed the place t’other day in my benzine buggy. There are crumbling foundations alongside the little run that meanders its way through the narrow valley. Sulphur water is like brains where you find it. At least red sulphur water is that way. The Red Sulphur Springs are in the southern end of famous old Monroe County West Virginia and less than an hour from White Sulphur Springs, and in less than half-an hour we drove in sight of Salt Sulphur Springs after we got out of the valley where the Red is located.

Gone, all gone, are the improvements that graced the little valley and the surrounding hillsides in the days of the place. Today there stands a sizeable building there which looks like it might have been built for sheltering the occasional guest who chanced to light there for a brief visit. Water in the original Red Sulphur Spring was as clear as the sky and as cool as a cucumber. Its mean average temperature was 51 degrees Fahrenheit. It was mountain water and contained a peculiar sulphur compound. As a medical agent the distinguishing reputation of this particular water was that it was a curative for consumption. As far back as 1822 celebrated came there and pronounced the waters beneficial in cases of pulmonary troubles. Soon the news of this was heralded to the country and tubercular sufferers, like a drowning man grasping at a floating straw, found their way to the spa which promised at least a measure of relief in their sore affliction. Those who came in the last stages of consumption derived little or no advantage from the healing streams of sulphur water that flowed out of the moss or lichen lined spring. They only found death lurking for the in the land of hills that is Monroe.

Nearest railroad point to Red Sulphur was Lowell over on the Greenbrier River a dozen miles away. At Red Sulphur the altitude is some 1600 feet above sea level. When Honorable W.M.O. Dawson was Governor of West Virginia the Red Sulphur had its last chance to stage a comeback but that chance faded away like due before the rising sun. When $95,000 was appropriated to found a sanitarium for consumptive patients Red Sulphur saw its slim chance. Ten acres and the great spring at Red Sulphur were offered gratis to the state as an inducement to locate the sanitarium in the Red Sulphur spot. However, the offer was not accepted and Tera Alta in the home county of Governor Dawson was chosen as the place where the house of healing would be located. It was pointed out by the committee to locate the hospital that the spring in the deep hollow made it out of the question to spend so much state money there. It was the remoteness of Red Sulphur Spring that sealed its doom as a state institution location.

Not one of the historic springs of Monroe County was in close proximity to a railroad. Old Sweet Salt Sulphur and the Red Sulphur Springs were off the beaten path. Today fast cars whizz over hard surface roads and pass these resorts of a century ago. Once in a great while those who are only interested in seeing how many miles they can get on a gallon of gasoline while they are out on a lark, will stop and read the historic commission signs which tell a terse story of the silvery streamed springs. These signs are there so those who run may read.

Speaking of things that have become passed, I was shown one of the old lard oil lamps wore back there a generation ago as they labored long and dangerously in the coal mines in this area. Emory Huffslater has the old lamp and he found it in a working Eccles mine one day while he and his buddy were in there looking around. When he brought the lamp out, the Crab Orchard man struck a match to see would the oil soaked wick would work. It did. It was lard oil in the little coffee pot shaped lamp. When lit the flame showed the poor miner the way to work and the way to go home. If the mine had gas in it the open flame would set it off. Aubrey Bishop of over Oak Hill has one of these out moded lamps for me and will not let me have it until I go and get it. This I will soon do on account of I need one to put in my museum. As one looks back over the past generation and sees how great improvements have been made in safety devices in the mines he sees how far we have come in making life safer in the bowels of the earth. That old carbide lamp was not any great shakes of improvement over the lard oil lamp, was it?