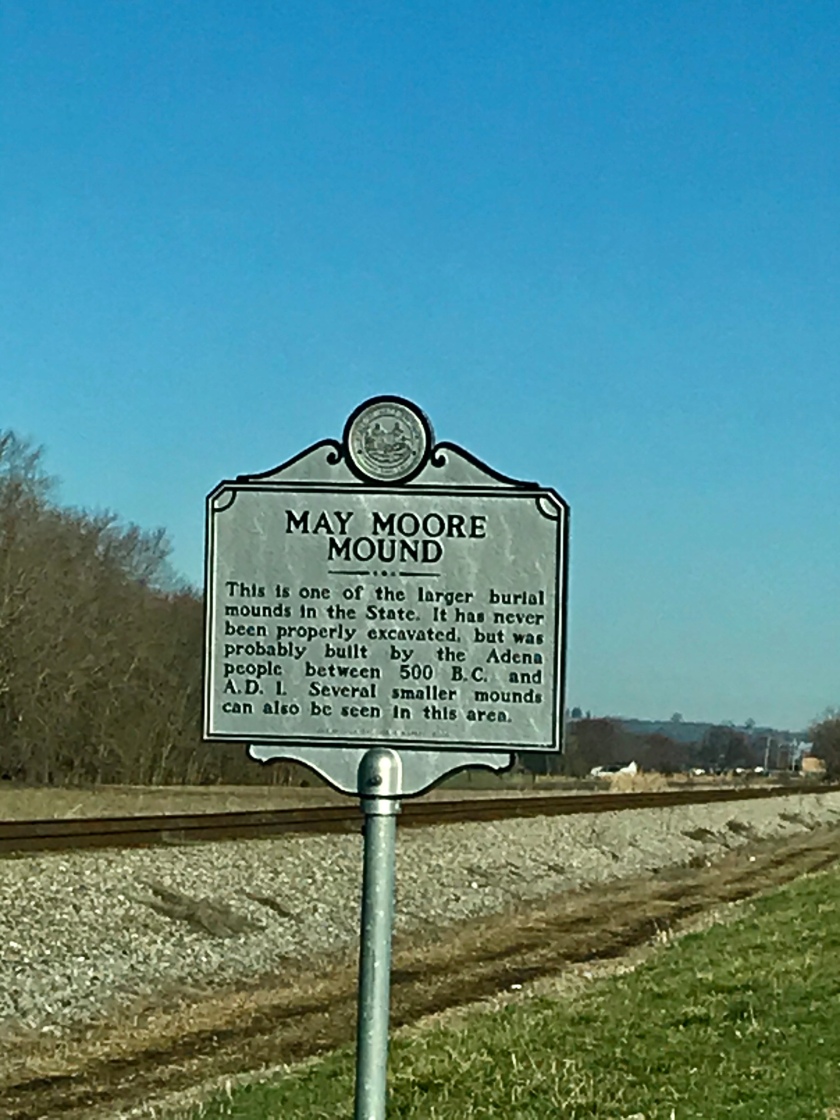 I have passed the Historical Marker so many times in my travels from New Haven to Huntington. I have always wondered about the specific history of the site, the history beyond the few sentences of the marker. What an interesting history! Not only because this is a relatively undisturbed Adena burial mound but even further that the Moores for whom the mound are named include one of the first judges on the WV Supreme Court of Appeals.

Per Wiki: The Adena culture was a Pre-Columbian Native American culture that existed from 1000 to 200 BC, in a time known as the Early Woodland period. The Adena culture refers to what were probably a number of related Native American societies sharing a burial complex and ceremonial system. The Adena lived in an area including parts of present-day Ohio, Indiana, Wisconsin, West Virginia, Kentucky, New York, Pennsylvania, and Maryland.

Per WV Archives and History

The Adena people were the first Native Americans to build ceremonial mounds. In other parts of the world, ceremonial burials had occurred much earlier. The Egyptian pyramids date to 2700 BCE; in England, stone chambers called barrows were used as early as 2000 BCE; between 1700 and 1400 BCE, keirgans were used in central Siberia; and the burial mounds of the Choo Dynasty in northern China date to 1000 BCE.

We know little about how or why the mounds were built. Historian Otis Rice suggests these early Americans “built mounds over the remains of chiefs, shamans, priests, and other honored dead.” For their “common folk,” the Adenas cremated the dead bodies, placing the remains in small log tombs on the surface of the ground. Virtually all of these graves have been destroyed by nature and later settlement. Therefore, the more substantial mounds are our only physical records of Adena burials.

The May Moore Mound is a prehistoric Adena mound located on private property in Mason County, on the Ohio River south of Point Pleasant. The mound is mentioned in the Report on the Mound Explorations of the Bureau of Ethnology by Cyrus Thomas, describing the extensive explorations of mounds and earthworks conducted throughout North America between 1882 and 1886 by the Smithsonian Institution. Thomas described the mound as being located on the farm of Judge Moore and the largest in the area. The report fails to mention any excavation of the mound.

In 1962, West Virginia Archeological Society members Delf Norona, Oscar Mairs, and Bob White visited the May Moore Mound, which Norona described as possibly the third largest in West Virginia. Although the mound appeared to have been cut into several times previously, it seemed to be intact enough to retain much valuable information. At the present time, the mound is one of the few remaining Adena mounds that is relatively undisturbed.

This Article was written by Darla S. Spencer

Report on the mound explorations of the Bureau of ethnology

From Theresa’s Haunted History of the Tri State Blog:

In tri-state ghost-lore, Bruce Chapel’s haunted history is often tied in directly with the haunted history of the Mai Moore Mansion.  The Mai Moore mansion was once the home to Charles Page Thomas Moore, his wife Urilla Kline, and four daughters, Ida, Rebecca, Lauretta Mai (often referred to as May, Mae or Mai), and Elizabeth V.  It was located in the Mercer’s Bottom/Apple Grove area of Mason County.

The Mai Moore Mansion was built around the time of, or shortly after the Civil War.  It was originally believed to have been a later residence of George Moore who died in 1880 while in residence.  George Moore was the uncle and adoptive father of Charles Page Thomas Moore.

Charles, who was born in February of 1831 in Greenbrier County, came to live with his uncle shortly after the death of his mother when he was 14 years of age.  His father, Thomas, died when Charles was just an infant. Charles would go on to attend Marshall Academy, and several other institutions of higher learning in his quest at obtaining his law degree.  While at Jefferson College in Canonsburg, PA, Charles co-founded the Phi Kappa Psi fraternity in 1852.  He was admitted to the bar in 1856, and served with Union forces during the Civil War.  After serving in the war, he returned home to practice law.  He went on to become a justice of the WV Supreme Court of Appeals, retiring in 1881 to live in Mason County in the Mai Moore Mansion.  Charles Page Thomas Moore died on July 7, 1904.  He is buried in Bruce Chapel Cemetery.

After the death of Charles P.T. Moore, the mansion remained in possession of the Moore family.  It was located near a small Adena Indian mound, named the Mai Moore Mound after Charles’ daughter, Lauretta Mai.  Mai, as she preferred to be called, remained in the home after his death, and the mansion thus became known as the Mai Moore Mansion. It was consumed by fire in 1959.  Vandals soon stole or damaged what was left, and by 1968 another fire had completely gutted the structure, leaving nothing but ruins.  Lauretta Mai, born on January 19, 1873, never married.  She passed away on March 12, 1965 and is also buried in Bruce Chapel Cemetery, along with her mother, and two sisters who also never married.

Charles Page Thomas Moore (February 8, 1831 – July 7, 1904) was a lawyer and justice of the West Virginia Supreme Court of Appeals, who before the American Civil War had helped found the Phi Kappa Psi fraternity in 1852 at Jefferson College (now Washington and Jefferson College) in Canonsburg, Pennsylvania.

Admitted to the Virginia bar, Moore established his legal practice at Point Pleasant along the Ohio River near his foster father’s farm. In 1860 he won election as the Commonwealth’s attorney for Mason County. At various times he had legal partnerships with Nicholas Fitzhugh, James H. Couch and William Tomlinson.

After former Confederates were again allowed to hold office, Moore defeated Republican James F. Brown in 1870. He sat as a judge in the first session of the West Virginia Supreme Court of Appeals in 1870. Two years later, West Virginia adopted a new state Constitution, thereby cutting short all the terms of the three-judge court. Moore was a nominee of both parties in 1872 and among the five judges elected to the new Virginia Supreme Court of Appeals. He wrote and delivered 107 opinions before resigning in May 1881. His successor, Richmond-born James French Patton, a fellow Democrat, had been a former Confederate officer. However, in 1888, fellow Mason County lawyer John W. English would be elected to the West Virginia Supreme Court, then George Poffenbarger.

Moore died at Gallipolis Ferry, Mason County, West Virginia in 1904. He is buried at Bruce Chapel cemetery in Mason County.