I did not think I could despise a female character as much as I did Pepper Potts. But then she took a back seat to Jane Foster. It is irksome to me that Marvel created these strong amazing characters (Potts is a renowned business woman while Foster is a scientist) and then make them annoyingly codependent.  They are all “Pick Me. Choose Me. Love Me.” I call it the Superman Relationship Phenomena.  Ever since Christopher Reeve’s Superman took Margot Kidder’s Lois on a magical carpet ride in 1978, the super hero industry feels the formula to success is: A) Introduce Hero, B) Give Hero Love Interest, and then C) Have Super Hero woo her with his super powers. Gods and Girlfriends…. ugh  I will say, I am always amazed by the perfect eyebrows being rocked in this movie.

The highlight of this movie was the naked scientist, Dr Selvig. His is my favorite character. Let’s take a minute to think on this – The actor who plays Selvig is Stellan Skarsgård. He is father to: True Blood’s Vampire Eric, It’s Pennywise and Viking’s Floki.  That family can act!

I like the makeup and costuming for Malekith. A really great villain in the comic books.  He looks a little more wicked in print: 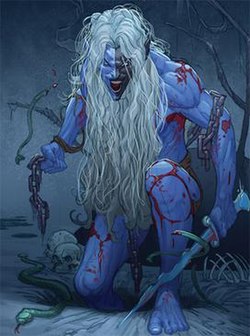 I love me some Idris as Heimdall. THAT is a backstory I would watch from beginning to end…

It is fascinating that Loki grieves the mother he sent assassins to.

The ending was too easy and left me like…. meh.

Again: Yoohoo Avengers?  Where are you?

Rankings through this movie:

IMDB Synopsis: When Dr. Jane Foster (Natalie Portman) gets cursed with a powerful entity known as the Aether, Thor is heralded of the cosmic event known as the Convergence and the genocidal Dark Elves.