“The sun does not always shine in West Virginia, but the people always do.”

I love that video.

While doing genealogy research at the Cabell County Public Library, I came across a book on Fayette County and in it was a picture of President Kennedy visiting Oak Hill, West Virginia.  I am mad at myself for not writing down the name of the book so I can go back to it when I return to the library.  I took a snapshot of the photos though:

Would anyone happen to know the name of the book or the author?  If not, I will search until I find it at the library and update this blog accordingly.  The thing that struck me is that he is speaking in the first photo to the editors of The Log, my high school’s newspaper.  (At the end of this blog I will put up scans of The Knothole, a chip off the old Log – it was the smaller, more silly paper that was published in between the Log issues).

According to the WV Culture website, Kennedy was on a campaign stump and his schedule was as follows:

John F. Kennedy begins his day in Beckley with breakfast and a tour of the Beckley Manufacturing Plant. He then visits Mount Hope, where he speaks from a car roof. He gives a news conference at WOAY-TV in Oak Hill and visits Collins High School, where cheerleaders lead the crowd in chanting, “Hey, hey, what do you say? We’re for Kennedy all the way!” From here, he proceeds to Fayetteville, where he speaks on the Fayette County Courthouse steps. Later, as Kennedy enters Gauley Bridge High School, the school’s jazz band plays, “There’ll Be a Hot Time in the Old Town Tonight.” In Montgomery, JFK goes on a walking tour of Montgomery and speaks at Montgomery High School, where Mayor D. P. Brown estimates a crowd of 1,500 to 1,800. His campaign then drives along Route 60 to Charleston, passing through and making brief stops at Cedar Grove and Cabin Creek Junction, where he speaks at a supermarket and tells about his four years in the Navy during World War II. In Charleston, he tours the Owens-Illinois bottle plant on MacCorkle Avenue in Kanawha City. The bottle plant employs 1,300 workers, both men and women. By evening, Kennedy arrives in Huntington where he speaks briefly at a reception in the ballroom of the Hotel Prichard. After this reception, he departs for Washington, DC.

Ted Kennedy attends the Jefferson Club banquet in the ballroom of the Chancellor Hotel in Parkersburg. Mrs. Muriel Humphrey also attends this event with her son, Douglas and Robert. Kennedy and the Humphreys are seated at opposite ends of the speaker’s table.

Franklin D. Roosevelt, Jr. visits Marlinton, Richwood, and Summersville. He is late for the speech in Summersville because his car was pulled over by Richwood police officer Bernard Dawson to make way for a funeral procession. His driver tried to get the police officer to make an exception, but no exceptions are made and the car waits until the procession passes.

A few newspaper articles I found: 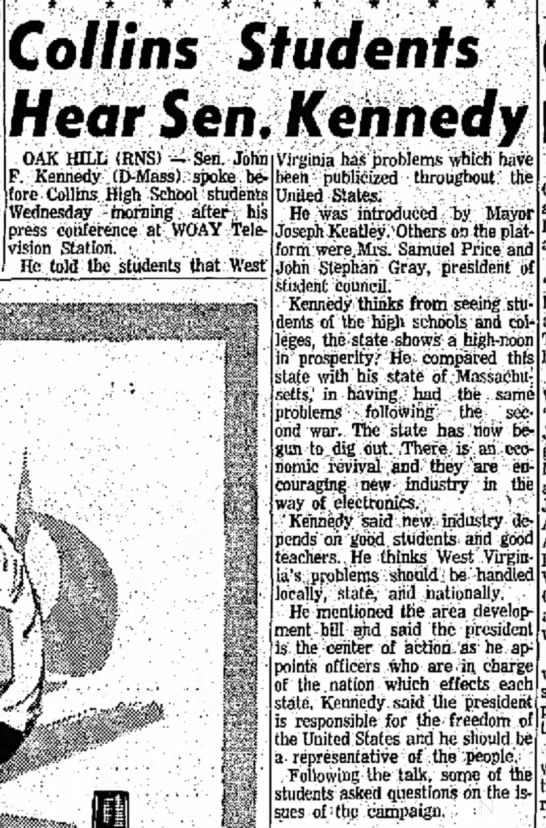 And the YouTube videos I have found with Kennedy in WV:

And the issue of the Knothole I have in my high school memories box: