Genealogy has become like therapy for me.  It is methodical, in a lot of cases.  It is putting pieces together of a puzzle that has an echo of familiar.  I am able to lose myself in the paperwork of it all and I love it.  In recent months I have been mad at Ma, my birth father and the “third party” because of their childish triangle.  My anger had dimmed a little because I moved on to working on Husband’s ancestors and had removed it from the forefront of my lobe.  I had taken all of the pre-Daddy B.S. and put it in a binder and stored it away.  I was mad at myself for not just throwing it away but in my mind, I thought: I will keep it until I run the course of information and then I will have a “burn this shit” evening at my fire pit with a glass of wine. 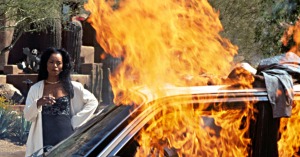 Ok, maybe not that dramatic.  However, I had put it aside for the time being.  That is, until this weekend, when I was doing a quick sort of the paperwork that was strewn across my library floor.  I had pulled things out of cedar chests, out of a multitude of folders I had stored in a multitude of places and out of tubs from Daddy’s.  It was just everywhere.  There were old greeting cards, school papers from various grades from EVERYONE that mattered to me, pictures, funeral cards, etc.  I knew that until I put it in SOME type of organized chaos that I would never be able to drill down on getting it chronicled, recorded and then stored away somewhere other than on my floor.  I had emptied random tubs and then I sorted: Me/Husband, Daughter, Son, peripheral relatives, Ma/Daddy/pre-Daddy.  I picked up what I thought was something I made when I was in grade school (it was colorful and childish, so it made sense).  Then I thought “To My Baby”?  With a sense of dread I knew it was one from “her”.  I kinda-sorta remember seeing this before but had totally forgotten about it.  Ah, bliss.  There are still days that I come across things that, no matter how much I try to resolve them, just irritate the shit out of me. “A Jewell” correspondences will never be anything less than jarring.  Another childish homemade card (I guess is the best description).  And the letter stuffed inside that was more than unsettling. 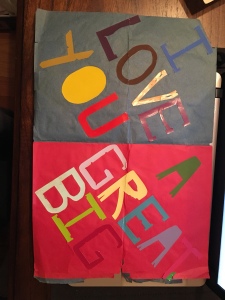 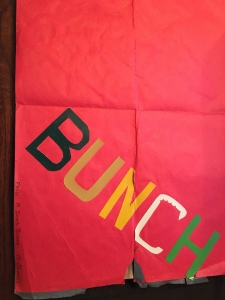 The tell-tale sign, the signature. A Dumb Bunny.  Again, to recap:

This weekend I found out from the archives specialists that it will be difficult-to-impossible to get the divorce records for my parents from Raleigh County from Feb 1972.  She said she believes it would take an order from a judge and “curiosity” is not something they are ok with.  I will still try but the mystery of my birth father failing to support his wife and seven children may remain a mystery.  I still believe that it was a fabrication on Ma’s part but there were rumors of other kids and I would be interested in seeing if there was ANY documentation to support that.

Also, inside that vibrant card above was this:

It is not Ma’s handwriting. I am not sure if it is a dumb bunny’s, but I am willing to venture a bet that it is because she talks about “I was supposed to see your husband”.  Who writes shit like that and is ok with themselves afterward?? I am pretty sure I will never get to a point that these “letters and cards and things of a dirty nature” do not leave me feeling unnerved.  I tried to think of it from bunny’s perspective: she was involved with my father, along came a woman and suddenly my father was married (with child) to her. But then I think: He moved on!  Pick yourself up by your bootstraps and get on with your life.  If he thought that little for you that he married another woman, what makes you think that he will ever be 100% with/for you?

And then…the thing that calms me: I am thankful and grateful that she was spiteful and that she was able to continue to drive that wedge between Ma and my father.  He obviously did not care for Ma.  And, Daddy was the one person in my life who I am sure loved me beyond measure and, from the time he met me, had my best interests at heart.  I ended up where I needed to be, fathered by who I needed as a role model.  Maybe that is the point of all of this crap being cleaned up/out?  I don’t know.

There are still times, like now, that I wonder about things.

I wonder if Ma was the only one?

I wonder if bunny had to take on all of the adversaries?

I wonder if there are more of us out there who were cut out/off?

I hope that when this is all done and there are no more stones I can see to turn that I can let this go once and for all and toss it all in the flames. If nothing else, by the end of this adventure I will be able to say: I have seen all there is to see, there are no hidden things beneath stones unturned, it is what it is and that is that.

Until then, I am still curious about some thing and why/how they played out.  So, pass the salt, it might be a while.