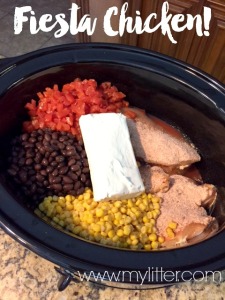 One of the smaller cans of Rotel Tomatoes with Green Chilies

One can of whole sweet corn (do not drain)

One can of black beans (rinsed)

One block of cream cheese

I packet of Ortega taco seasoning.

I used a crock pot liner (they are amazing, USE it!  my friends call them the crock pot condom – you can find them in the ziplock section of WalMart, usually on the bottom shelf.

I put the pork roast in (fat side down).  I used a steak knife and stabbed holes all over (nice way to work out your issues).  I sprinkled some garlic salt and Italian seasoning. I then poured 1/4 of the taco seasoning on the meat.  I then dumped in the corn and beans (sort of mixing together) around the sides of the roast.  I poured the tomatoes over the top and poured another 1/4 of the seasoning on top of them.

Slow cooked on low for 8 hours.  Was able to shred the meat using two forks.  I cut the cream cheese into cubes and dropped it in, using the forks to mash/stir with the meat and veggies.  I poured the last bit of the seasoning in, mixing well and placed the lid back on for 10 more minutes to make sure the cream cheese was melted.  Gave it one more good stir and then served over rice.

Three people had two helpings, there was enough for three helpings for tomorrows lunch/dinner.

If you try it, let me know how it turns out!