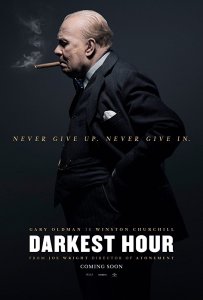 I find it interesting that this movie and Dunkirk came out at the same time.  I almost wish that I had watched this one first.  I feel that I need to read so much more on English history after this Oscar season.  Gary Oldman being transformed into Churchill was amazing.  It is no surprise that their makeup/hair department would also be nominated for an Oscar.

This was a great movie, I would recommend it.

IMDB Synopsis: During the early days of World War II, the fate of Western Europe hangs on the newly-appointed British Prime Minister Winston Churchill, who must decide whether to negotiate with Adolf Hitler, or fight on against incredible odds.