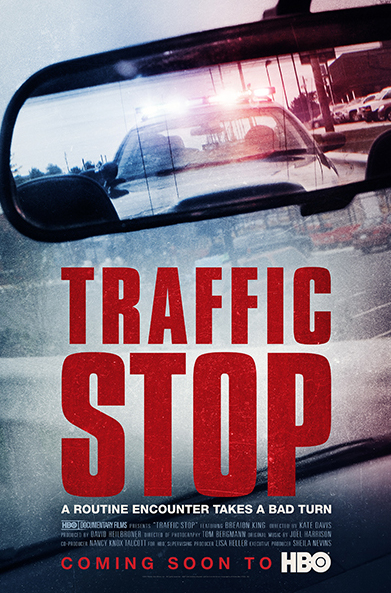 I found myself clinching my fists and holding my breath through the struggle.

IMDB Synopsis: Traffic Stop tells the story of Breaion King, a 26-year-old African-American school teacher from Austin, Texas, who was stopped for a routine traffic violation that escalated into a dramatic arrest. Caught on police dash cams, King was pulled from her car by the arresting officer, repeatedly thrown to the ground and handcuffed. En route to jail in a squad car, she engaged in a revealing conversation with her escorting officer about race and law enforcement in America. The documentary juxtaposes dash cam footage with scenes from King’s everyday life, offering a fuller portrait of the woman caught up in this unsettling encounter.

Breaion King is a school teacher, a dancer, a singer and a child of God.  Before all else, she is those things.  It broke my heart, the part of the film where she googles herself to find the photos from when she modeled.  She says those are what used to pop up when you searched her but now you have to scroll a long way to find them, past the mugshots which will never go away.

This film highlights the necessity of dash cams and body cams.  It removes all possibility of relying on he said – she said.  To listen to the arresting officer tell the next officer what occurred, there were differences in his story and what the dash cam showed.  The thing that stood out to me (in retrospect) was his brief description of what occurred (i.e. being that physical with such a small person) and then asking this superior “Are you ok with that?”  Why ask that?  If he wasn’t ok with it, would your story have changed in the subsequent tellings?  I have friends who are police officers, was married to police officer – I know that there are amazing police officers out there.  I also know that there are some that should not be in the role their job provides them. Again, I believe that this film highlights the necessity of video footage so that the actual facts are shown.  There are three sides to every story: yours, mine and the truth.

I watched this film on HBO.  This is the trailer:

Below this are spoilers, my thoughts while watching the film: