There will be spoilers!

I liked it.  It was right at two hours and ten minutes (could have shaved it down a little).  I really think Jamie Foxx should have seen an Oscar nod.  Robert Downey Jr was great in this role.  He is a shit.  I say that with affection, but he is.  Well, his character is.  And he wants to do this good thing for this one man who needs help.  But he cannot fix him.  He can only be his friend.  And sometimes, just sometimes, that is exactly what is needed.  And that is what this story is about.  Nathanial Ayers (Foxx) is a homeless man suffering from schizophrenic tendencies.  Steve Lopez (Downey Jr) of the LA Times happens upon Ayers and decides to write a piece on him.  Once he gets to know him, Lopez finds that he is amazed by this musical genius who is held captive by his own mind.

There are some glimpses into the mind of Ayers – we are shown the voices and the colorful tricks his mind has played.  We are taught to fear him in an instant but to love him for a lifetime. We are also shown the drug riddled streets of LA (skid row) and how organizations like LAMP try to help those most in need in the midst of skid row chaos.

Another thing shown in this movie is how people truly want to help in their own ways – Lopez offers help best he can, his readers offer Ayers a cello, the social worker wants him to heal at a pace that is right for him.  They all are rooting for him, I was rooting for him.

Such a mystery the mind is.

If you get a chance, check out Steve Lopez’s blog.  He truly is a good writer.

I liked it.  You should rent it.  Did you see the movie?  Did you like or hate it?  Let me know in the comments below! 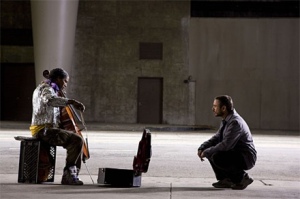 IMDB Synopsis: A Los Angeles journalist befriends a homeless Juilliard-trained musician, while looking for a new article for the paper.