While Renau and I were adventuring in Canaan Valley, we stopped at an old second hand store that was packed with interesting tidbits.  One of those tidbits was a jacket patch for a Parachute Club located at Fort Sill Ok. 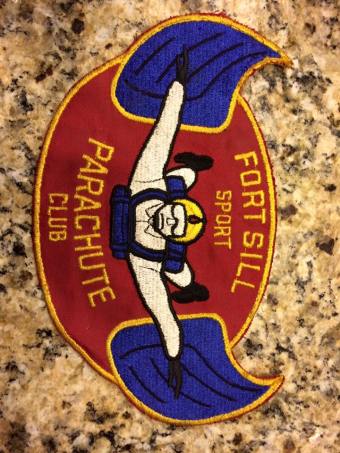 I thought about keeping it as it was an interesting conversation piece. But then I thought it would be a nice gesture to reach out to the club and offer to send it to them for a memory piece.  And as acts of kindness is on the menu for #48in48…  I first tried by emailing a photographer who takes pictures for the base –  no answer. And then I found an email address for the base proper.  I sent an email and attached a photo.  I received this response:

Ms. Dolin, Unfortunately, the Sport Parachute Club is no longer an organization on Fort Sill. Our last airships left post decades ago and without that basic support, the club quickly faded into history.

Personally, I think it’s cool! Were I you, I’d keep it as a keepsake of a very special place in aviation history – Henry Post Army Airfield, Fort Sill.

The airfield was established in 1917 – and is the oldest continually used military airport in the nation. That year, the 1st Aero Squadron was formed here under the command of Capt. Benjamin Foulois – who later commanded the Air Corps. The unit was the first U.S. military unit assigned for tactical/combat missions – so we’ve even got a plaque at our airfield naming this the birthplace of the U.S. Air Force!

It’s kind of cool because Fort Sill has been kept largely in pristine shape and history preserved. That first group of brave flyers (We had a fatal crash the day after they started flying!) and their ground support crews uncrated and assembled their planes on the post’s parade field (known today as Old Post Quadrangle), then pushed them down the hill to the polo field for their initial flights. Today, you can track their short journey into aviation history with a short walk! And how much cooler does history get than that?

Oh, and as a parachutist, you’ll be interested to know that Fort Sill held the record at one time! Here’s a story about that: “DROPS 22,000 FEET TO SAFE LANDING FORT SILL, Okla., Feb. 23, 1921.—What is believed by aerial officers here to be a world’s altitude record for a parachute jump was established Tuesday when Sergeant Ensel Chambers, 135th aero squadron, jumped from an airship, piloted by Lieutenant Wagner, at a height of 22,000 feet during an aerial circus at Post field. The previous record is said to be 20,000 feet. Chambers landed six miles from his takeoff (Salt Lake Telegram, Salt Lake City, Utah).”

Thanks for the offer, but I’m sure the badge will be better used and cherished by an enthusiastic parachutist than a museum staff where it would probably go into a drawer forever. Kevin Young PAO Webmaster

It is a little sad that they are no longer there. But what a great email with some neat history…. Thank you Mr Young, that was awesome! I will add this cool patch to my collection of random stuff in my library.  Yet another amazing memory with Renau!