Combing my Rolodex of memories for the heroes who have come along in my life, one stands out in a grand fashion – Ma’s father (my Pawpaw).

What an amazing character he was and he is sorely missed.  He was a true original Hero, as far as I am concerned.  Alexander Taraczkozy was born on Valentines Day to Hungarian immigrants.  My great-grandfather was a shoe maker and my great-grandmother ran a boarding house.  They lived in the coal camps and had amazingly colorful children.  I used to tell kids my Pawpaw was Redd Foxx ((laughing)).  I was in Kindergarten at the time and had the vast majority of my class believing that Elvis was my uncle and Redd Foxx was my Grandfather.  Yes, I was THAT kid.

Pawpaw was rough and rowdy in his youth.  Back in those days, families waited until their children went to bed before putting up the Christmas tree on Christmas Eve.  So, Pawpaw’s Mother set him to the task of finding the family Christmas tree.  He did a great job.  It was beautiful.  Probably the most beautiful tree they ever had.  Of course, the local Klan’s grand poobah who was suddenly missing the fir tree from in front of his dining room window and might not have been as inclined to pat my dark olive-skinned Pawpaw on the back for a job well done.   There was also the time that Pawpaw stole the Klan robes.  As the story goes, my Great-gran stayed up late sewing shirts for fear of the robes being found in their home and harm coming to Alexander.

His wild streak did not end there.  One of the greatest stories that involved Alexander involves his moonshine-running days.  He was known for running shine and hiding out in boarding houses.  One time, in particular, the local authorities were tipped off that there would be a run of shine happening.  My Pawpaw, being the crafty entrepreneur that he was, realized the importance of a timely delivery.  So, he borrowed a hearse.  What good would a hearse do for the delivery of shine, you ask?  Well, back in those days, a hearse looked like some sort of ambulance with a light bar on top.  (example:) 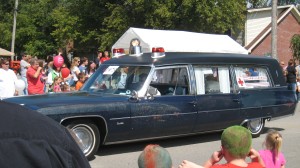 So, he takes the hearse (and a spare coffin), lines the coffin with aforementioned goods and off he went to make his delivery.  Right as rain he encounters the roadblock.  He smiles at the officer, flips the lights and points a thumb over his shoulder in the direction of the coffin.  It paid off, the officer waved him through and on he went to his destination.

Oh what colorful stories I have of Pawpaw.  I sit here and smile as I type.  Although he has been gone from us for decades, I cannot help but miss him so very, very much.  For most of my life he called me “Sam”.  He would send me “over the hill” to the market to buy cigars for him when I was just seven or eight.  With two one dollar bills for my own use, I would pick up a glass bottle of Dr Pepper, a Reese Cup and a poke of penny candies (chocolate footballs, sixlets and a hand full of now-and-laters).  With the Rose Tipped Cigars in hand I would head home while popping sixlets in my mouth as I skipped along.

My Pawpaw would sit on the front porch, watching the neighborhood from his perch while smoking his Rose Tips.  He was missing three fingers on one hand from a blasting cap accident in the mines.  His green workpants, suspenders and cap tipped a little up and to the side were all parts of his signature wardrobe.  One of his old wooden canes was used by my Ma.  It hangs in my closet in my bedroom.  I see it every morning when I am getting ready for work.  It reminds me of them and makes me smile.

I miss you so much Pawpaw.  Please give Mawmaw and Ma a squeeze for me.  Sam misses you something fierce.

Alex and Pauline Taraczkozy (below) 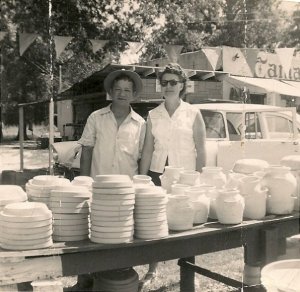 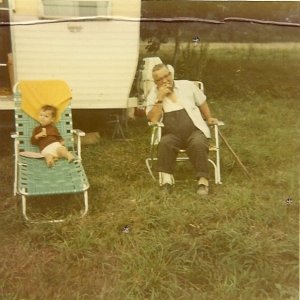 Alexander and “Sam” aka Chelle (above)

Alex (in his signature outfit) and Pauline (below) 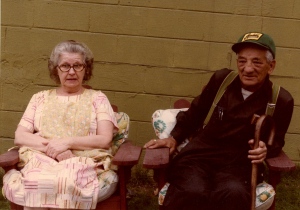