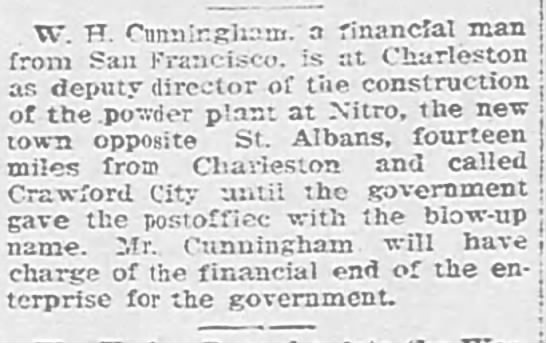 Reading the Feb 1918 article on Nitro in The West Virginian newspaper was fascinating. The government opens a huge plant and decides to build an adjacent city for the 30-32,000 workers (and their families) who will be brought in to run the facility. Houses, merchantiles, meeting rooms were built in addition to the homes and all with the intent of being disassembled after the war and sold off. Yes, you read that right: they were building a town they intended to tear down after the war. The article I speak of is here:

I originally became interested in researching Nitro because of the age old question of whether it was named after what the plant was to supply: nitroglycerin. My first look in to the town’s history was through a book of WV town names where I found this entry:

Then I took to the newspaper archives in 1918 to see what else I could find. One of the most interesting articles is the first one of this blog. But there were others.

It appears that “Nitro” was not the first name given to this city. Originally, it was “Crawford City” but the Post Office felt that that name was too similar to other cities in the state. It was decided to call the city “Nitro” instead through an agreement between the Post Office and the government who was building the city.

In an effort to make the finished product more accessible for shipment, there would be need to update the infrastructure of the area. It was decided to add a bridge across the Kanawha that would allow the plant to be accessed by the railroad.

And, what town would be complete without a flag flying above its residents?

Men were rushed to the area to help move along the construction of the plant:

Although Charleston officials were told a much lower amount of Powder would be made at the plant, in March it was found that 500 tons daily would be produced for the war effort.

Knowing that the government was building this city to accommodate imported residents, local real estate dealers realized what a commodity it would be to live in the immediate area and how the residents of adjacent towns could benefit from the immediate access to things like theaters, new banks, new stores. The ads were placed in big blocks in the local papers.

Every week, new workers would arrive from different parts of the country to begin work at the government plant.

I don’t want the readers to think that the government was snubbing hardworking locals. The ads in the local papers went out looking for workers statewide to move to the area and become part of the government workforce. The one below is from the Wheeling paper and touts 37 1/2 cents per hour with time and a half for OT, double time on Sunday. I am curious what is considered “Good, Free Entertainments”.

Of course, more people require more churches in the area and expansion of local hospitals as well.

Through the efforts of the plant built in Nitro, along with one built in Nashville, the United States increased its production of smokeless powder from 1M pounds to 3.5M pounds per month.

Further research into espionage charges that were brought against workers were not what I expected: i.e. passing secrets to foreign agents. Seems that some of these charges feel more along the lines of labor issues against doing things the way the US government would prefer you to do them.

And, probably one of the saddest articles I found on the employment of workers for the Nitro plant: a suicide at Thurmond for which they did not even care to find the body.

According to the state archives:

It’s often assumed the town of Nitro is named after nitroglycerin, but that’s the wrong assumption. Historian Bill Wintz says Nitro’s name can be traced back to its origins as a World War I boomtown and nitrocellulose, which is used to manufacture gunpowder.

The government chose the area that is now Nitro for one of three new explosives plants after the United States entered the war. The plants were built to relieve a severe shortage of gunpowder.

Even though construction at Nitro had begun the week before, official groundbreaking ceremonies for the plant were held January 2, 1918. Bill Wintz says it took just 11 months for workers to build the plant.

Wintz: During the eleven months that it took to build Nitro, there were 110,000 people, different people, on the payroll. But the average only stayed about 6 weeks. There was terrific turnover. The most that was ever there at one time was about 30,000.

And Wintz says Clark Gable, who was to become a major Hollywood movie star, was one of them. Wintz came across the information in a newspaper article.

Wintz: It was in this article he said that while he was in Nitro, he had a girlfriend and the girlfriend was worker there too and she lived in Welch, West Virginia. And he said he had to . . . she quit before he did. And he said one weekend he wanted to go see her and he left on the train. And he said he was on the train all weekend except two hours that he spent with his girlfriend in Welch. He did actually work at Nitro. He was in the . . . he was a telephone repairman.

The explosives plant was not completed in time to help the war effort. The facilities were sold at auction and Nitro eventually became the center of one of the most productive chemical industries in the world.