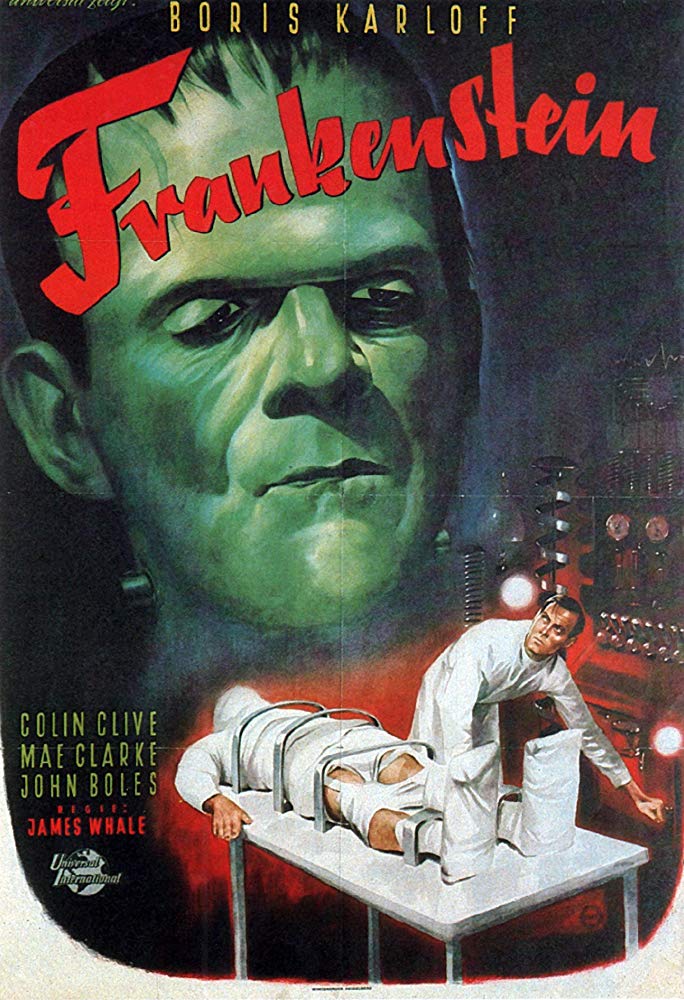 I had never seen the original Frankenstein from 1931 with Boris Karloff as the creature. Because I had been watching the various films which inspired the Rocky Horror Picture Show, I decided to correct that.

I learned a few things…

IMDb Synopsis: An obsessed scientist assembles a living being from parts of exhumed corpses.

We open on a burial. A guy in a suit takes off his coat to begin pushing the dirt over. So odd – he is in a suit and filling a grave. There is a correlation in current times with “suits” “filling graves”, but that is for another blog. After all is said and done, in comes Frankenstein and his assistant to “unbury” the dead man. “He’s just resting, waiting for a new life to come.”

For some reason, there is a man hanged at the end of the lane. WTAH? The body is cut down and added to the bounty of bodies. Oops the neck is broken, the brain is useless. We have to find a brain.

I laughed out loud… the abnormal brain (Abby…. Abby Normal). And, just like that, Fritz brings along Abby.

The Doctor’s girlfriend pines for him in a beautiful mansion with a man who might be a rival love interest. They go to the university to ask about his wellbeing. They realize he has left the university to perform more extreme experiments. He left because the bodies the universities used were not perfect enough.

A storm is brewing overhead, above Frankenstein’s laboratory. And I would like to know how he can afford this big castle!

We see the body of the creation on the table, the famous haircut showing above the sheet. In 15 minutes, when the storm is at its height, we will be ready! Then someone knocks…. Those pesky kids! Wait a minute… How could they hear a door knock downstairs in the stone castle?

FYI: I love Fritz – he is my kind of cranky.

Frankenstein’s first name is Henry?? How did I not remember this??

After some persistence, he let’s Elizabeth and her party into the house. He locks the door behind him. They will have front row seats to the main event!

“Here in this machinery I have gone beyond that (ultraviolet) and have discovered the great ray that first brought life into the world.”

That image there reminds me why I chose to watch Frankenstein this evening – that is a Frank-N-Furter pose if ever I have seen one!!

One man crazy, three very sane spectators! (And the storm rages on.)

Before a time of CGI – how amazing they staging of a scene of this magnitude. It’s alive!!!

And now we cut to Baron, Henry’s Father, smoking hookah. Hold up – it isn’t a castle?? The Baron informs us that Frankenstein is in a windmill.

There is a guy named Burgermaster!! Wait, no. He is “The Burgomaster”, head of the village and the village has prepared for the wedding of Henry and Elizabeth but Henry is all locked up in the windmill with the creature!

Back at the windmill, er… I mean castle… um no…. laboratory… Henry Frankenstein and the university professor, Dr. Waldman, discuss the creature and Henry realizes there was a mixup in the stolen brain! Madness! You have created a monster and it will destroy you!

What an entry into a room!! Boris Karloff walks backward through the door!! The creature understands commands from the doctor and sits when requested.

In an experiment with sunlight, we see that Frankenstein loves the light. But when Fritz accidentally scares him with a torch, everything goes to hell in a handbasket. After putting him in the cell, Fritz torments the creature and pays the price.

Dr. Waldman sends Henry to get a hypodermic needle with a tranq so they can end the creature’s life. After a struggle the monster is knocked out and just in time! Elizabeth and Henry’s father are coming up the hill!

Again, I will never be able to think “Frankenstein’s Castle” again as this takes place in a WINDMILL!

Henry passes out from…hysteria? exhaustion? And his father and Elizabeth take him away, leaving Dr Waldman to preserve his research while euthanizing the creature.

Instead of killing him first, Waldman decides to dissect him with his arms laying free and everything… You would’ve thought he would strap him down if nothing else. Of course, the imaginable happens and the creature flees the windmill.

We cut to Henry and Elizabeth on a sunny patio, taking lunch and discussing their wedding plans. Has no one missed Waldman??

We are now at the wedding day with no explanation – do we know the creature escaped? do we know Waldman is dead? I have questions!

The House of Frankenstein (I bet that would make a great vogue ball!). All of the villagers have come to celebrate. The crowd is happy. Everyone is frolicking and drinking beer. It is like a Bavarian festival or something! And we see Frankenstein coming upon a house with a dad and his daughter.

Frankenstein appears from the bushes and Maria (the girl) takes his hand and I am suddenly wondering: why is his head square? She gives him a daisy. And he smiles and sits to play with her as she picks daisies and shares them with him. The innocence! Well, maybe not. When the creature runs out of daisies to throw into the lake, he picks up Maria and tosses her in and I spit out my drink laughing!

We are back at the leaping lederhosen! Elizabeth is stunning in her veil and long train. NOW they are worried about Waldman? How much time has passed. Elizabeth has a feeling that “something is coming between us”.

And – for no real reason, Henry locks Elizabeth in her wedding chambers… THEN they hear the monster in the house. I think the later should have happened first, but who am I to complain?

In the cellars! No… outside Elizabeth’s window where she is locked in. For a big monster, he sure is stealth…. SCREAAAAMMMM! Again he gets away but she is safe. She caught a case of the vapors and passed out and how stunning she is even unconscious…

Then we see this:

Now, that is how you change scenes…

And the happy crowd turns into a mob.

Wait, how did they know that Maria was murdered?

Does the crowd know of the creature?!

Henry runs out to find the creature, leaving Elizabeth in Victor’s care. The mob has increased in size and anger. The “fiend’ must be found! Torches lit and away they go.

They chase the creature into the mountains and are suddenly being led by Henry. Henry becomes separated from the mob and finds the creature. The monster seizes upon the opportunity and attacks, carrying Henry back to the windmill (which from the outside is much shorter and made of wood not stone like the inside).

Thank god there was a perfect battering log, laying there for the crowd to use to try to batter the door. Henry is thrown from the roof to the blades of the windmill. They carry him off while simultaneously set the windmill on fire. The creature is trapped beneath a falling beam as the windmill is engulfed.

Final scene is of the housemaids bringing a bottle of wine to the bedroom of Henry where he is recuperating with Elizabeth at his side. The Barron intercepts the maids, has the wine, toasts The House of Frankenstein and cut to “The End”.

Coming in at an hour and twelve minutes, it was a quick watch. Great to see the original (I had not) and to see some of the differences of the Frankenstein in my head and the one that presented in the matinee in 1931!

If you haven’t seen it, you should do so now! If you have seen it, let me know what you thought in the comments below!