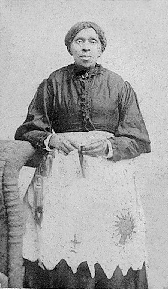 Harriet Powers (October 29, 1837 – January 1, 1910) was an African-American slave, folk artist, and quilt maker from rural Georgia. She used traditional appliqué techniques to record local legends, Bible stories, and astronomical events on her quilts. Only two of her quilts are known to have survived: Bible Quilt 1886 and Pictorial Quilt 1898. Her quilts are considered among the finest examples of nineteenth-century Southern quilting. Her work is on display at the National Museum of American History in Washington, DC, and the Museum of Fine Arts in Boston, Massachusetts.

Per the American History Museum:

Harriet Powers, an African American farm woman of Clarke County, Georgia, made this quilt in about 1886. She exhibited it at the Athens Cotton Fair of 1886 where it captured the imagination of Jennie Smith, a young internationally-trained local artist. Of her discovery, Jennie later wrote: “I have spent my whole life in the South, and am perfectly familiar with thirty patterns of quilts, but I had never seen an original design, and never a living creature portrayed in patchwork, until the year 1886, when there was held in Athens, Georgia, a ‘Cotton-Fair,’ which was on a much larger scale than an ordinary county fair, as there was a ‘Wild West’ show, and Cotton Weddings; and a circus, all at the same time. There was a large accumulation farm products–the largest potatoes, tallest cotton stalk, biggest water-melon! Best display of pickles and preserves made by exhibitor! Best display of seeds &c and all the attractions usual to such occasions, and in one corner there hung a quilt-which ‘captured my eye’ and after much difficulty I found the owner, a negro woman, who lives in the country on a little farm whereon she and husband make a respectable living . . . . The scenes on the quilt were biblical and I was fascinated. I offered to buy it, but it was not for sale at any price.”Four years later, Mrs. Powers, at the urging of her husband because of hard times, offered to sell the quilt, but Miss Smith’s “financial affairs were at a low ebb and I could not purchase.” Later Jennie sent word that she would buy the quilt if Harriet still wanted to dispose of it. Harriet “arrived one afternoon in front of my door in an ox-cart with the precious burden in her lap encased in a clean flour sack, which was still further enveloped in a crocus sack. She offered it for ten dollars–but–I only had five to give.” Harriet went out to consult her husband and reported that he said she had better take the five dollars.Mrs. Powers regretfully turned over her precious creation, but only after explaining each of the eleven panels of the design, which Jennie Smith recorded. Briefly, the subjects are Adam and Eve in the Garden of Eden, a continuance of Paradise with Eve and a son, Satan amidst the seven stars, Cain killing his brother Abel, Cain goes into the land of Nod to get a wife, Jacob’s dream, the baptism of Christ, the crucifixion, Judas Iscariot and the thirty pieces of silver, the Last Supper, and the Holy Family.In her narrative about the quilt, artist Jennie revealed why she was so taken with it: “Her style is bold and rather on the impressionists order while there is a naievete of expression that is delicious.” In recent times, historians have compared Harriet’s work to textiles of Dahomey, West Africa.The Bible quilt is both hand- and machine-stitched. There is outline quilting around the motifs and random intersecting straight lines in open spaces. A one-inch border of straight-grain printed cotton is folded over the edges and machine-stitched through all layers.Harriet Powers was born a slave near Athens, Georgia, on October 29, 1837. At a young age, she married Armstead Powers and they had at least nine children. Some time after the Civil War, they became landowners. Eventually, circumstances forced them to sell off part of the land but not their home. The date of Harriet’s death, Jan. 1, 1910, was recently discovered on her gravestone in Athen’s Gospel Pilgrim Cemetery.

Powers was born into slavery near Athens, Georgia. Historians say she spent her early life on a plantation owned by John and Nancy Lester in Madison County, Georgia, where it is believed she learned to sew from other slaves or from her mistress.

Though an 1895 Chicago Tribune article about the Cotton States and International Expo characterizes Powers as ignorant and illiterate, only learning Bible stories from “others more fortunate”, quilt historian Kyra E. Hicks discovered during research for her book This I Accomplish: Harriet Powers’ Bible Quilt and Other Pieces a letter written by Powers explaining how she came to be literate and that she learned bible stories, which served as the inspiration for her quilt work storytelling through her own study of the bible.

In 1855, at the age of eighteen, Powers married Armstead Powers. They had at least nine children. Harriet’s husband, Armstead Powers identified himself as a ‘farmhand’ in the 1870 census; Harriet is listed as ‘keeping house’, and three children, Amanda, Leon Joe (Alonzo) and Nancy lived at home. In the 1880s, after being freed at the end of the Civil War, they owned four acres of land and had a small farm. During the 1890s, due to financial difficulty, her husband slowly sold off parcels of their land, defaulted on taxes, and eventually left Harriet and their farm in 1895. Powers never remarried and probably supported herself as a seamstress. For most of her life she lived in Clarke County, mainly in Sandy Creek and Buck Branch.

Powers died on January 1, 1910, and was buried in the Gospel Pilgrim Cemetery in Athens. Her grave was rediscovered in January 2005.

In 2009, Powers was inducted into the Georgia Women of Achievement Hall of Fame.

In October 2010, there was a series of events in Athens, Georgia, around the theme “Hands That Can Do: A Centennial Celebration of Harriet Powers.” The events included a quilt exhibit, storytelling, a gospel concert, a symposium, a commemorative church service, and visit to the Powers grave site.

More Photos
Seeds will always find a way to grow with enough sunshine and nurturing. No matter where they fall. Same could be said for life in general. Plant seeds of love today. Appreciate what comes from the fruit of your efforts. Think of what you can do to enhance the growth. Don’t judge where they decide to sprout. As for these beauties, the popped up from deadhead seeds on my patio. I moved a tiny camper over to protect them from being unintentionally trampled and to offer support. They are small but by God they are beautiful! #SowLoveNotHate #SowLove #PlantLoveAndWatchItGrow
Cotton Candy Sunset