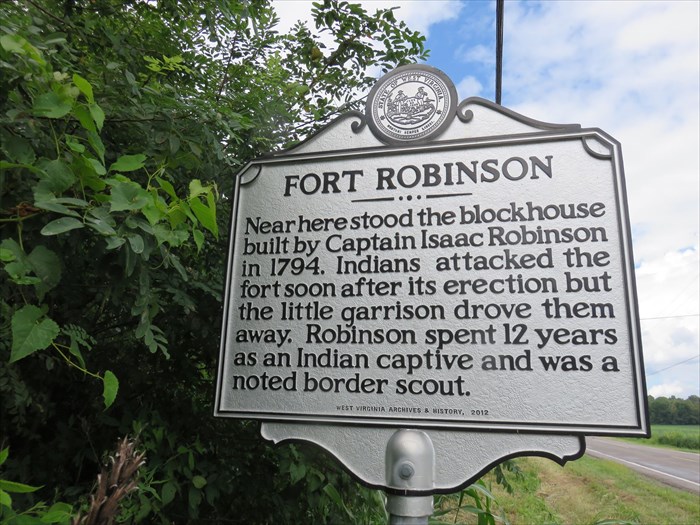 This marker is located close to the road into Mason County Airport. There is no pull off close to the marker. Cars do not slow as you walk on the birm.

There is not an abundance of information about Robinson. I hope to keep him on my “continue to look for resources” list so if I find something I can circle back around to this blog.

If you have any reading material recommendations or research resources, I would welcome the info.

Before the Mason County, Virginia, court, December 3, 1832, appeared Isaac Robinson, aged 78, who made the following statement: born December 1754, in Virginia near the North Carolina line; captured at age of five by Shawnee Indians with whom he remained seven or eight years. Bearing marks on ear and nose of Indian tortures, he was surrendered at Fort Duquesne and restored to his parents in Botetourt County in 1781.

The following January, he volunteered in a company of infantry commanded by Henry Paulding and Lieutenant Graham. Served as an orderly sergeant, marched to Bedford, joined General Greene at Guilford, and was with Lee’s Light Horse on the day of the battle. Became ill and was discharged. Hired by William Shelton as a substitute in the Yorktown campaign. Moved west after the Yorktown campaign and served as a spy until Wayne’s treaty. Settled in Robinson District, Mason County, Virginia, and there built Fort Robinson, as defense against the Indians

According to WV Gen Web:

The land that would become Mason County, West Virginia was first surveyed in 1772 by a team led by George Washington. They surveyed a tract of 51,302 acres, just over eighty square miles, north of a line drawn between Letart Falls and the mouth of the Great Kanawha, including all of most of Robinson District, most of Lewis, and all of Graham and Waggener Districts. The land was patented to them on December 15, 1772 by Lord Dunmore, the royal governor of Virginia, on behalf of King George III. Most of Robinson District consists of tracts originally allocated to three of the surveyors: an 8,000 acre tract allocated to Adam Stephens, now in the northern portion of the district, and running from the Ohio River on the west to the land surveyed for John Polson, now the western boundary of Graham District; immediately south of Stephens’ portion, a 5,000 acre tract set aside for Peter Hog, who also claimed the 3,000 acres immediately north of Stephens; and on the southern end another tract of 5,000 acres allocated to George Muse, between the Ohio and the upper waters of the right-hand fork of Rayburn Creek. Together, these tracts account for 18,000 out of the roughly 21,350 currently estimated to lie in Robinson District. The balance consists of land added to the eastern end of Stephens’ and Hog’s surveys, to the west of Cooper District and the southern part of Graham District, including Sassafras on Upper Flats, and portions of Oldtown Creek and Robinson Run; as well as land submerged in the Ohio River, not included in the original survey, but reserved by Virginia when it ceded its claim to the Northwest Territory in 1784.

The first European settler in Robinson District was Isaac Robinson, whose cabin was built near the mouth of Mill Creek about 1792. His family was killed by the Wyandot, and he was taken captive. Adopted by an Indian family, he remained with the Wyandot for several years, before returning to his home in Virginia.