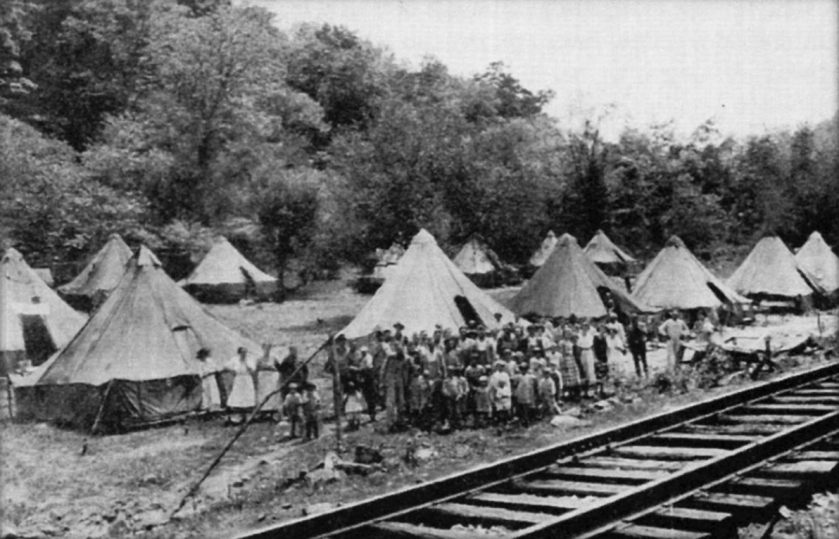 The Bull Moose Special was an armored train deployed by the coal operators during the Paint Creek-Cabin Creek Strike of 1912–14. The train’s name derived from the fact that the men who commissioned it were tied to the Progressive Party of West Virginia, nicknamed the Bull Moose Party after the national party’s presidential candidate, Theodore Roosevelt. Outfitted at the C&O Railroad shops in Huntington, the train originally consisted of a locomotive, a passenger car, and an iron-plated baggage car equipped with two machine guns. The Special operated during the fall and winter of 1912, escorting other trains hauling nonunion workers into the strike district. Its most notorious trip came in February 1913, when the train was used to attack a tent colony of strikers at the Paint Creek community of Holly Grove.

The attack was triggered on February 7 when strikers from Holly Grove fired on a company ambulance and attacked the store at nearby Mucklow. Later that night, Kanawha County Sheriff Bonner Hill, Paint Creek coal operator Quinn Morton, a number of deputies, mine guards, and C&O Railway police boarded the Bull Moose Special armed with arrest warrants for unnamed persons. As the darkened train approached Holly Grove, two blasts from the engine’s whistle apparently signaled the beginning of machine gun and rifle fire from the Bull Moose Special into the tents of sleeping miners and their families. Several people were wounded, but only one striker, Cesco Estep, was killed. Estep was trying to get his son and pregnant wife to safety. In revenge, the enraged strikers attacked the mine guards’ camp at Mucklow two days later.

This Article was written by Fred A. Barkey

The Paint Creek–Cabin Creek Strike, or the Paint Creek Mine War, was a confrontation between striking coal miners and coal operators in Kanawha County, West Virginia, centered on the area enclosed by two streams, Paint Creek and Cabin Creek.

The strike lasted from April 18, 1912 through July 1913. The confrontation directly caused perhaps fifty violent deaths, as well as many more deaths indirectly caused by starvation and malnutrition among the striking miners. In the number of casualties it counts among the worst conflicts in American labor union history.

The strike was a prelude to subsequent labor-related West Virginia conflicts in the following years, the Battle of Matewan and the Battle of Blair Mountain.

When the Paint Creek union negotiated a new contract with the operators in 1912, they demanded that operators raise the compensation rate to the same level as the surrounding area. This increase would have cost operators approximately fifteen cents per miner per day, but the operators refused. The union called a strike for April 18, 1912.

1. That the operators accept and recognize the union.

2. That the miners’ right to free speech and peaceable assembly be restored.

3. That the operators accept and recognize the union.

4. That compulsory trading at company stores be ended.

5. That cribbing be discontinued and that 2,000 pounds of mined coal constitute a ton. That scales be installed at mines to weigh the tonnage of the miners.

6. That miners be allowed to employ their own check-weighmen to check against the weights found by company check-weighmen, as provided by law.

7. That the two check-weighmen determine all docking penalties.

After little debate, the Cabin Creek miners decided to join the Paint Creek miners and declared their own strike.

Partly because of the influence of the UMW, the strike was conducted without violence for its first month. However, on May 10, 1912, the operators on Paint Creek and Cabin Creek hired the notorious Baldwin–Felts Detective Agency to break the strike. Baldwin–Felts responded by sending more than 300 mine guards led by Albert Felts, Lee Felts, and Tony Gaujot  Agents hired by the coal operators to break the strike stand armed.

Activist Mother Jones arrived in June, as mine owners began evicting workers from their rented houses, and brought in replacement workers. Beatings, sniper attacks, and sabotage were daily occurrences. Through July, Jones rallied the workers, made her way through armed guards to persuade another group of miners in Eskdale, West Virginia to join the strike, and organized a secret march of three thousand armed miners to the steps of the state capitol in Charleston to read a declaration of war to Governor William E. Glasscock. On July 26, miners attacked Mucklow, present-day Gallagher, leaving at least twelve strikers and four guards dead.

On September 1, a force of over 5,000 miners from the north side of the Kanawha River joined the strikers’ tent city, leading Governor Glasscock to establish martial law in the region the following day. The 1,200 state troops confiscating arms and ammunition from both sides lessened tensions to some degree, but the strikers were forbidden to congregate, and were subject to fast, unfair trials in military court. Meanwhile, strikers’ families began to suffer from hunger, cold, and the unsanitary conditions in their temporary tent colony at Holly Grove.Mother Jones ties the shoelaces of a miner’s child in the tent colony.

On October 15, martial law was lifted, only to be re-imposed on November 15 and lifted on January 10 by Governor Glasscock, with less than two months left in office.

On February 7 Mucklow was again attacked by miners with at least one casualty. In retaliation that evening, the Kanawha County Sheriff Bonner Hill and a group of detectives attacked the Holly Grove miners’ settlement with an armored train, called the “Bull Moose Special”, attacking with machine guns and high-powered rifles, putting 100 machine-gun bullets through the frame house of striker Cesco Estep and killing him. Another miners’ raid on Mucklow killed at least two people a few days later, and on February 10 martial law was imposed for the third and final time.Miners hold their rifles in Eskdale.

Mother Jones was arrested on February 13 in Pratt and charged in military court for inciting riot (reportedly for attempting to read the Declaration of Independence), and, later, conspiracy to commit murder. She refused to recognize the jurisdiction of the military court, and refused to enter a plea. Jones was sentenced to twenty years in the state penitentiary and acquired a case of pneumonia.

New governor Dr. Henry D. Hatfield was sworn in on March 4 and immediately traveled to the area as his first priority. He released some thirty individuals held under martial law, transferred Mother Jones to Charleston for medical treatment, and in April moved to impose conditions for the strike settlement. Strikers had the choice to accept Hatfield’s somewhat favorable terms, or be deported from the state. The Paint Creek miners accepted and signed the “Hatfield Contract” on May 1. The Cabin Creek miners continued to resist, with some violence, until the end of July.

Mother Jones remained under house arrest, in Mrs. Carney’s Boarding House, until she smuggled out a message through a secret trapdoor in her room, a message sent to pro-labor Indiana Senator John Worth Kern. Governor Hatfield released Jones, without comment, after a total of 85 days imprisonment.

One theme of the Senate hearings was an attempt to identify the number of deaths related to the strike, and responsibility for them. One source estimates “perhaps fifty violent deaths” without estimating the effect of the conditions in the tent camp.

The strike came to national attention in July 1913, cartoonist Art Young published a cartoon in The Masses called “Poisoned at the Source” depicting the president of The Associated Press, Frank B. Noyes, poisoning a well labeled ‘The News’ with lies, suppressed facts, slander, and prejudice. It was accompanied by an editorial by Max Eastman claiming that the AP had not only suppressed the facts of the strike, but that the AP had a profound conflict of interest. Despite the AP’s denials, its local AP representative, Cal Young, was also a member of the military tribunal passing judgment on the strikers. The AP responded with two suits of criminal libel against Eastman and Young on November 1913 and January 1914. Both suits eventually were dropped. The AP’s specific reasons for dropping the suits, and its general relationship to labor, are explored in Upton Sinclair’s 1919 exposé The Brass Check.