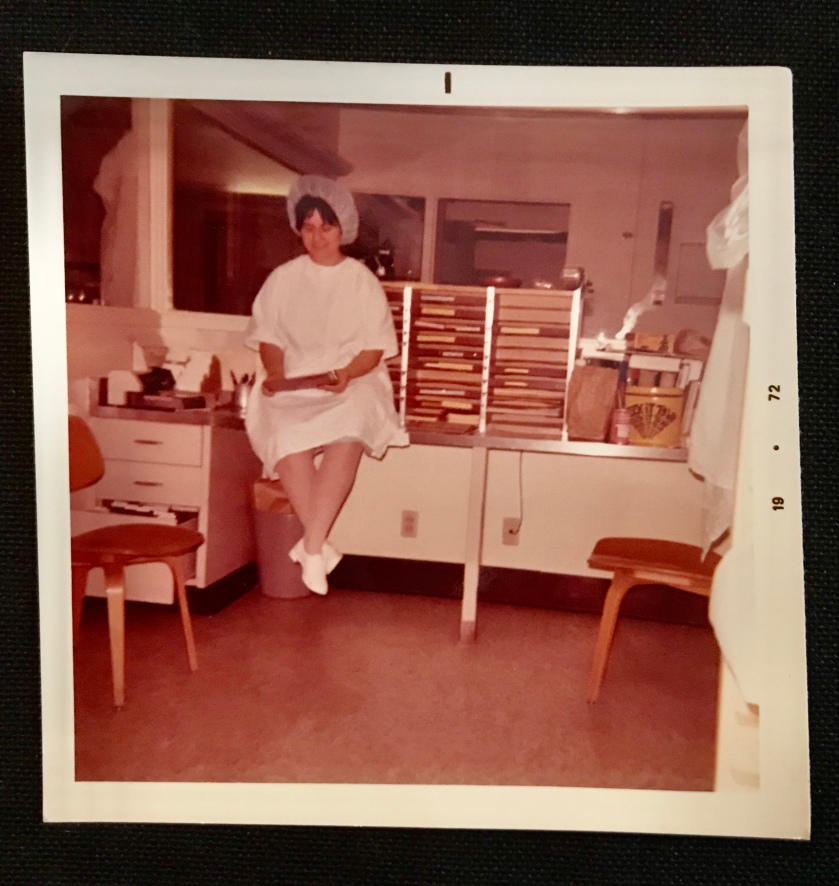 My Mom took great pride in the fact that she was at one point a nurse. This photo is of her sitting on the desk at the nurses station. There she would meet Susie Seletyn (Nana) who would introduce her to her son Paul and they would fall in love and eventually get married.

Mom attended Raleigh County Vocational Technical Center School of Practical Nursing. She received her letter to report to class on July 7, 1970, in the middle of leaving my biological father and moving home to West Virginia. She has moved back home with her parents in Eccles, Raleigh County, West Virginia.

The Vocational School is now called the Academy of Careers and Technology. In a little under three months, she and 31 classmates graduated the School of Practical Nursing. Their graduation ceremony was held at Park Junior High School Auditorium.

Before she graduated she had already received her employment offer from Beckley Appalachian Regional Hospital (BAR-H). She would begin work there in October. She worked on the floor with the babies.

Two years later she would suffer an injury while trying to catch a patient who had passed out. She tried to make sure the person did not hit the floor. As she attempted to catch the patient, she did irreparable harm to her back. Over the course of the rest of her life she had no less than a dozen major back surgeries. The final one was to pick splinters of bone out because of the deterioration of her spine.

Even though she was disabled for the rest of her life, for the longest time she maintained her license. Renewing it each year.

The history of Appalachian Regional Hospital per their website:

In 1956, the United Mine Workers of America (UMWA) and thousands of citizens in the coal communities dedicated the Miners Memorial Hospital Association’s (MMHA) facilities. The system’s hospitals were located in Harlan, Hazard, McDowell, Middlesboro, Whitesburg, Pikeville and South Williamson, Kentucky; Man and Beckley, West Virginia; and Wise, Virginia. By the early 1960s, MMHA announced its intention to close some of the hospitals and soon after the Board of National Missions formed a new and independent not-for-profit health system Appalachian Regional Hospitals (ARH)–that purchased the Miners Memorial Hospitals. The health system changed its name in 1986 to Appalachian Regional Healthcare to more accurately describe its far-ranging activities.

Today, we operate hospitals in Barbourville, Harlan, Hazard, Hyden, McDowell, Middlesboro, Morgan County, South Williamson and Whitesburg, Kentucky, and Beckley and Summers County, West Virginia. ARH has always responded to the changing demands of rural healthcare. Over the years, we have built and acquired new facilities as well as invested in new technology and medical capabilities.

A local hospital marked its half century in operation Friday with corporate officials, staff, politicians and area dignitaries on hand to join in the celebration.

Community CEO Rocco Massey, who has been with the hospital 26 years, said Beckley-ARH provides a vital resource for southern West Virginia communities.

“The hospital serves as a provider of health care services in all aspects for the community — from emergency medicine through the surgical specialties,” Massey said. “Perhaps, more importantly, it serves as a safety net for those in need of health care.”

Massey began as an X-ray technology student in 1979. In 1986, he graduated from his training one day and went to work at the hospital the following day.

As part of his keynote address, Rep. Nick Rahall, D-W.Va., called the celebration “a milestone in health care in southern West Virginia.”

“This is right in line with our coal-rich heritage that has made this state and this nation so great,” Rahall said. “The vision that the United Mine Workers of America and its president, the late John L. Lewis, had 50 years ago is now a reality. This started out as a miners’ hospital and now provides quality care for people in all professions and at all levels of our community.”

Early in the 1950s, Lewis led the union’s mission to build 10 modern hospitals in the heart of Appalachia’s coal mining region. The UMWA planned to recruit renowned physicians from around the country, establish residency training programs and build schools to train nurses, technicians and therapists.

In 1956, the UMWA dedicated the Miners Memorial Hospital Association’s (MMHA) facilities. The system’s hospitals were located in Harlan, Hazard, McDowell, Middlesboro, Whitesburg, Pikeville and South Williamson in Kentucky; Man and Beckley in West Virginia; and in Wise, Va. The Beckley facility opened Jan. 4, 1956, and was officially dedicated that year.

According to information provided on a UMWA Web site, the venture was a “huge success” with miners and their families and has served as a model for similar health care organizations. Its novel administrative ideas, including new kinds of nursing services, supply plans and efficiency efforts, were integrated into the hospitals’ designs in an effort to impress and recruit hard-to-get staff, according to the site.

The system’s residency programs operated in the larger hospitals at Beckley and Harlan. The organization maintained a School of Professional Nursing and a School for Nurse Anesthetists at Harlan, a School of Medical Technology at Beckley and other training programs for specially trained personnel.

“This is a great day to be able to celebrate 50 years serving the communities of southern West Virginia,” said Larry Meador, chairman of the Beckley-ARH board of trustees. “The caring employees are the greatest assets of this hospital. They treat the patients as if they were their own family members or personal friends.”