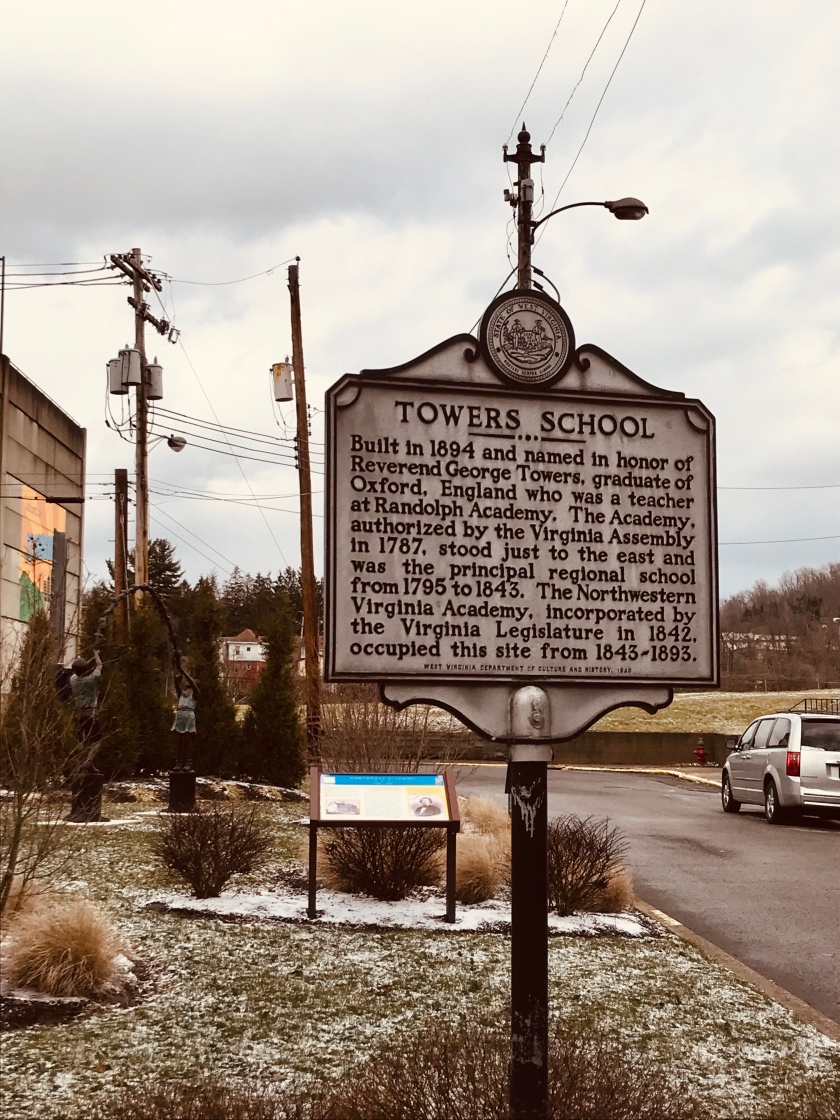 History Noted: Built in 1894 and named in honor of Reverend George Towers, graduate of Oxford, England who was a teacher at Randolph Academy. The Academy, authorized by the Virginia Assembly in 1787, stood just to the east and was the principal regional school from 1795 to 1843. The Northwestern Virginia Academy, incorporated by the Virginia Legislature in 1842, occupied this site from 1843-1893.

The Public Schools were opened in Clarksburg in the year 1866, soon after the establishment of free schools in the State. The independent District was established February 26, 1867, page 101, Acts of 1867; page 45 of Acts of 1868. Board has power under special statute to establish a Graded School, or Schools, where in addition to the branches taught in the common school they may teach Algebra, Geometry, Natural Philosophy, Chemistry, and such other branches as the Board may determine. The present Central School Building is one of the best, modern school edifices; it was completed in the year 1895, and cost about $20,000. This building occupies the ground that has been dedicated to school purposes for more than a century. The first building on this lot was the “Randolph Academy” which was incorporated by the Virginia Legislature in the year 1749. The trustees appointed to take charge of the same comprised several of the most illustrious names in the State, such as: Madison, George Mason, Philip Doddridge, &c. For the support of this institution one sixth of the surveyors bees collected in the counties comprising North-West Virginia were appropriated.

These fees prior to the time had been donated to the support of William and Mary College. In the year 1789 the Legislature authorized the trustees to raise a some of money by lottery for the use of the college, not to exceed one thousand pounds.

Reverend George Towers was the first and perhaps the only Professor of Randolph Academy. He was graduate of Oxford, England, and begin to teach here, Latin Hebrew, Greek and the sciences in the year 1795. He continued in charge for twenty years.

The brick building which was torn down in the year 1895, to give place to the present school edifice, was known as the “North Western Academy.” This Academy was incorporated by the Legislature in the year 1842; at the same time twenty trustees were appointed comprising some of the most prominent citizens of the county.

School was opened in the North Western Academy on the 1st of October, 1843, with the Rev. Gordon Battelle as the Professor in charge. Some of the most prominent men in this section of the country received their education wholly or in part at the North Western Academy. We enumerate a few of them as follows: Gov. Lloyd Lowndes of Maryland; Ex-Senator Johnson N. Camden; Judge Nathan Goff; Judge Thomas Harrison; Hon. Benj. Wilson; Hon. John J. Davis; Judge Edwin Maxwell, and many ministers, lawyers, physicians, farmers and men of affairs who we cannot name.

The grounds occupied by the new Central School Building and which for more than a century have been devoted to educational uses, contain one and a half acres, centrally located and planted with shade and ornamental trees.

The building is of brick, two stories and contains a large chapel hall, ten capacious school rooms, and an office; all well lighted. It is ventilated and heated by flues and hot-air furnaces which latter are situated in the basement, where there are washroom and large play-rooms for the children in storm weather.

Excerpts from books on the Reverend can be read by clicking the links below:

Voice of the new West by: Stephen W. Brown

The marker was located adjacent to the First United Methodist Church:

And catacorner to this sign which is visible from the interstate:

Across the road is a building that stands out. Above the doors it is noted “Gore Building 1910”. I found this on the Clarksburg city page: Past: The Gore Building, one of Uptown’s most notable classic structures, has recently regained the attention of Clarksburg’s citizens. Once a popular hotel in the early 1900’s, the Gore Building was owned by Dr. Truman E. Gore, Physician and brother of Howard M. Gore, Governor of West Virginia (1925-1929). Although it is considered to be somewhat of a neoclassical design, the hotel was erected to display many elements of the Renaissance Revival architectural period. The building was utilized as a hotel for many years before it was converted into office spaces, and it wasn’t until 1998 that the building was purchased by successful businessman and entrepreneur, Steve Haning to be utilized as commercial and residential property. With much exterior revitalization, including architectural facelifts and a suitable green and kaki paint job (original color); the building has become an attractive centerpiece for those entering Clarksburg from U.S. Route 50 and a perfect example of the positive direction that Uptown Clarksburg is moving in. The staff, under the direction of Haning, has worked diligently to capture the historical façade and many traditional components of the building, however, the interior structure has not fallen short of a true transformation in modernization.

There was a lovely sculpture with no artist identifier, I would love to know their name so I could credit them.