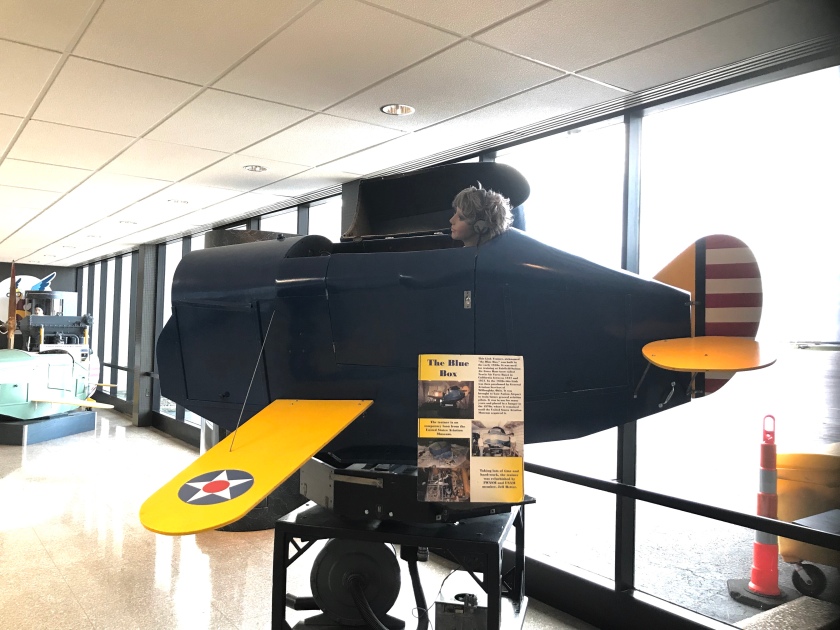 This past weekend, Husband and I traveled to Cleveland. I had never visited the city and I thoroughly enjoyed myself. On the drive up, he mentioned an airport that ran along the water’s edge, Burke Airport. During our visit we stopped at the Rock and Roll Hall of Fame and within view of where we parked was the airport. So, why not stop? Husband has never met an airplane he didn’t like. 🙂

According to their Wikipedia page:

Cleveland Burke Lakefront Airport (IATA: BKL, ICAO: KBKL, FAA LID: BKL) is a public airport on the shore of Lake Erie, in the northeast part of downtown Cleveland, Ohio, United States. It classified as a general aviation airport and is an FAA designated reliever to Cleveland Hopkins International Airport (CLE), which is Greater Cleveland’s primary airport. It is named after former Cleveland mayor and U.S. senator Thomas A. Burke.

The airport is owned and operated by the city of Cleveland, which also operates Hopkins. It serves a growing number of corporate jets and air taxi services. Burke Lakefront handles approximately 87,000 operations per year (average of 2000 to 2006), 60,013 for the first ten months of 2007. The airport is frequently used by professional sports team charter flights due to its proximity to FirstEnergy Stadium, Progressive Field, and Rocket Mortgage FieldHouse.

Husband thought we would drive past the parking lot, maybe take a peek at the planes seen just beyond the fence. While making our way around (and feeling as if we were being followed by a security golf cart) we happened to see a sign for the International Women’s Air & Space Museum located within. But, it was four o’clock. Odds are it was closed, right? Nope! The museum was open until 8:00 daily. So, we parked and made our way inside.

We were the only two people in the whole place. One gentleman came around to check on us. But, otherwise, we were left to our own wandering. The museum consists of various collections throughout the airport’s main building (first floor only).

Our Mission
The mission of the International Women’s Air & Space Museum is to preserve the history of women in aviation and space and to document their continuing contributions today and in the future.

Our History
More than 25 years ago the idea of preserving the history of women in aviation was just a dream. Since then, memorabilia and historical artifacts have been collected, preserved and stored. Today this dream is a reality. The International Women’s Air & Space Museum, Inc. (IWASM) began as a committee of Ninety-Nines who started saving memorabilia and history of women pilots. The Ninety-Nines is an international organization of women pilots formed in 1929. There were 99 charter members and Amelia Earhart was the first president. In 1986 the museum opened in Centerville, Ohio. IWASM was welcomed by the City of Cleveland, Ohio in 1998, where you will find our home at Burke Lakefront Airport. Our exhibits are in the lobby at Burke, as well as the west concourse, and are accessible seven days a week.

I loved looking at the various photos of Amelia Earhart. According to the museum’s website on this photo:

In May 1931, Earhart took off from Newark, NJ on her first transcontinental autogiro tour. The autogiro craft in which she flew was ordered specially for the aviatrix by the Beech-Nut Packing Company to promote their chewing gum. The autogiro was a relatively new aviation design that many at the time believed to be dangerous.

The coveralls Amelia is wearing in this picture were donated to IWASM in 1971. They were donated to the Ninety-Nines by Lauretta Schimmoler, who had received them from Margot DeCarie, Amelia’s personal secretary. Earhart had designed the coveralls herself.

For more information on this collection, click this link: https://iwasm.omeka.net/collections/show/2

In addition to Amelia Earhart, there are four other amazing female aviator collections to view:

Sometimes, the most random of stops can offer up the most interesting finds! The whole visit took under an hour. The airport is located within a quarter of a mile of the Rock and Roll Hall of Fame. Outside of the airport was a submarine on display (hope to see that on the next visit).

If you are an aviation enthusiast in Cleveland and have an hour or two to spare, I highly recommend the stop. It will not disappoint.