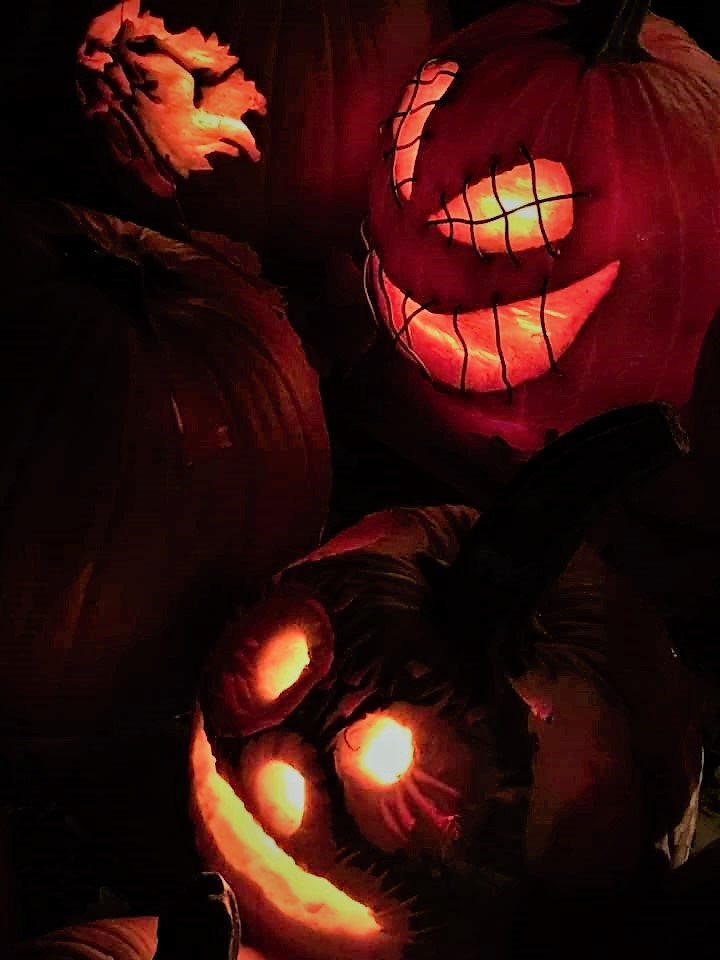 Have you ever wondered why we carve pumpkins on Halloween or why they are called Jack O’Lanterns?

According to some Irish folklore, centuries ago there lived a man who was mean, dubious and quite liberal with his drink. The town folk called him “Stingy Jack”. Jack had the reputation of one who takes pleasure in being a drunk, liar, manipulator, thief and all-around not nice person.

One night, Satan himself overheard two townsfolk talk of the evil deeds and wicked lies Jack put forth and how his actions would rival the Devil’s. Well, Satan was immediately jealous that this Jack was getting all the credit for being the most evil being around. Unconvinced that these rumors were true, Satan was determined to find this Jack and to put an end to him.

That night, when Satan found him, Jack was drunk and wandering through the countryside. Satan stood across the cobblestone path and blocked Jack’s way. Satan had an eerie grimace on his face, he almost glowed with the evil he emitted. Jack realized, somberly, that this was his end and that Satan had finally come to collect his malevolent soul.

Having nothing left to lose, Jack made a last request. He asked Satan to let him quench his thirst before they departed for Hades. Finding no reason not to agree to his request, Satan took Jack to the local pub where the bartender supplied him with many alcoholic beverages. Upon satisfying his thirst, Jack asked Satan to pay the tab on the booze. As you know, Satan is not one to carry around the money of men but, much to Satan’s surprise, Jack had a plan. Jack convinced Satan to change into a silver coin with which he would pay the bartender. Once the bartender accepted the payment, Satan could sneakily return to his normal form and he and Jack could be on their sneaky way. Satan, impressed by Jack’s nefarious tactics, surprisingly agreed.

Because he was skilled at the slight of hand and stealing things that were not his, Jack took the now transformed Satan (coin) and slyly placed it in his pocket which, by happenstance, also contained a crucifix. The presence of the crucifix kept Satan from escaping his (coin) form. Once out of the pub, Jack was able to coerce another deal from Satan. He had no other choice and was forced to agree to Jack’s demand: in exchange for Satan’s freedom, Satan had to spare Jack’s soul for ten years.

Ten years to the day later and in the exact same spot where they first met, Jack naturally found himself once again in Satan’s presence. Like the first time, Jack seemingly accepted it was his time to go to Hades for good. As Satan prepared to take him to hell, Jack asked if he could have one apple to feed his starving belly. Foolishly, Satan once again agreed to Jack’s request. Jack bemoaned that he was unable to reach the limb where the best fruit hung and asked Satan for assistance. As Satan climbed up the branches of a nearby apple tree, Jack surrounded its base with crucifixes. Satan, frustrated once more at his own foolishness, demanded to be released. As Jack did before, he made a demand: his soul would never be taken by Satan into Hades. Satan agreed and was set free, fleeing while vowing never to return.

Several years later, drinking took its toll on Jack, and he died in his sleep. Stingy Jack’s soul prepared to enter Heaven through the gates of St. Peter. Before he could cross the threshold, he was stopped. God stood before Jack and with his mighty voice told Jack that because of his sinful lifestyle, his deceitfulness and his drunken ways – he was not allowed into Heaven. With a nod of God’s head and…

…in the blink of an eye, Jack found himself standing before the Gates of Hell waiting to be admitted into the underworld of Hades. Satan, fulfilling his obligation to Jack, refused to take his soul.

To warn others of the consequences of following evil and sinful ways, Satan gave Jack an ember, marking him a denizen of the netherworld. From that day on until eternity’s end, Jack is doomed to roam the world between the planes of good and evil, with only an ember inside a hollowed turnip to light his way.

Ages ago, Irish folk would carve Jack’s face into a hollowed out turnip to ward off those who took to evil ways and to scare their children into being good. As Irish folk made their way to America, the tradition moved from the turnips to the pumpkins you see carved today.