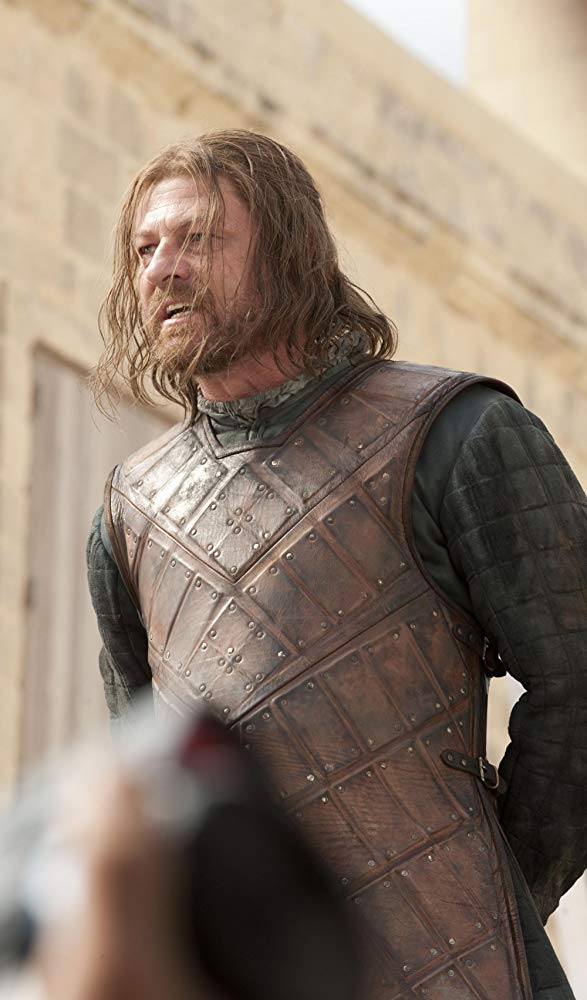 iMDb synopsis: Robb goes to war against the Lannisters. Jon finds himself struggling on deciding if his place is with Robb or the Night’s Watch. Drogo has fallen ill from a fresh battle wound. Daenerys is desperate to save him.

I feel like we saw more of beyond the wall. I feel also like the music changed just slightly. Inn At The Crossroads, The Eyrie – removed. There is a “Something Something” Bay next to the Riverlands.

We start with a blank screen but you can hear…. Awwww Ned is in the dungeon in the dark. Varys is there trying to convince him to think of his daughters. Varys tells him of traveling with a group of actors through the cities. Each man has a role to play. His role is to be a spy. Both in the book and with the show, I cannot understand why Varys did not cut him loose at this moment. In the book Ned’s mind falters which is something not conveyed as well on the screen. His inner thinking helped lay those layers. Varys does not want Stannis to be king, he is trying to use Ned’s children as the pry to lean him in that direction. “Sansa pleaded so in the court… What of your daughters’ lives my lord, is that a precious thing to you?”

Just for comparison, this is Conleth Hill WITH hair:

As a crow flies from a tower it is shot down by Rob. It is the modern day equivalent of tapping a phone line.

They are at the Twins. They need the Frey’s assistance by allowing them to cross the bridge to the other side of the river. That crossing is necessary to be able to get to Kings Landing and save Ned and the girls. Catelyn offers to go as his envoy.

I hated him in Harry Potter, detest him on Game of Thrones. He is such a dubious player of characters! So gross with marrying little girls. “Your family’s always pissed on me.” Walder is a tough nut. He tells Catelyn that he has too many sons and daughters, he needs to get rid of some. Catelyn asks for passage to cross. He balks at the idea. He talks of all the kinds, all the family houses then he says: “Give me one good reason why I should waste a single thought on any of ya.” Switch to Jon in the Snow…

Jon’s hand was injured saving the Commander’s life from the undead. He gives Jon a sword, called Longclaw. It is Valyrian. His son, Jorah, brought shame to their family and will never have it. Put your ill feelings for Allister aside… But no worries about that now, Allister was sent to Kings Landing with the dead yet still moving hand – to ask for assistance.

Sam tells Jon of his brother Rob. He is heading south to war with the Lannisters to save their father. “I should be there.” Move to The Twins where Catelyn returns to the encampment to tell Rob that the Freys will allow them passage. But, at a cost… Rob will take Oliver as his personal squire (and will later be knighted). And Arya will marry a son when they both come of age. And Rob is to marry a daughter when the fighting is done. “I see. Did you get a look at his daughters.” “one was….” He has no choice but to consent.

Their forces cross and are on the other side of the river. In the books the specific reasons were given on how they intended to divide and conquer by sending some troops on further on their current course and some across the river to defeat Jamie.

Back at the Wall, the Maester Aemon has asked Jon for help in feeding the ravens. He has decided to give Jon his backstory. Jon is struggling with being so far away from his family at a time when he feels they need him most. Today is the day that Jon needs to make a choice. “I may be a bastard but he is my father…” Aemon tells Jon of the death of his whole family, they had killed his brother’s son and the little children…. “My father was Maekar, the first of his name…. When I had refused the throne…. He was followed by the mad king.” Maester Aemon tells him he is bound by an oath and must live with it, like he has, for the rest of his days.

Maester Aemon says that his father was King Maekar Targaryen, who was followed by Aemon’s brother Aegon, who was then followed by Aerys “the Mad King” Targaryen. In the novels, however, Aerys was the son of Jaehaerys, Aegon’s second son, and Aerys was Aemon’s great-nephew.

From the snow we move to the desert and a Drogo barely holding onto his horse. He falls off. A Khal who falls off his horse is no Khal! “I must ride.” Daenerys insists they make camp right there. She asks for the with woman.

In Tywin’s war tent, the discussion is on Rob and his troop movement. Tywin is impressed with his mindless courage. Tywin tells Tyrion they will be in the vanguard on the front line. Tyrion leaves the tent to find Bronn who has “secured” Shae, the whore for Tyrion’s pleasure. Bronn took her from Sir What’s His Name, three tents down. Again, if Shae was a spy for Tywin, in this move does that make Bronn a pawn of Tywin’s as well?

“No one will hurt you, as long as you’re mine.” She accepts his proposal and mounts him right there.

Back on the edge of a cliff in the desert, things are not looking good for Drogo. He is talking out of his head and with fever. Jorah arrives. You can see the pultice the woman put on his chest. When Jorah pulls it away it has festered. Jorah tries to convince her to flee but she refuses. “This isn’t Westeros where men honor blood. They only honor strength… Your boy will be plucked from your breast and given to the dogs.” The witch arrives and the blood riders are not having any of this. Daenerys tells Jorah she thinks he should wear his armor tonight.

Daenerys works a deal involving black magic to save Drogo’s life. “Some say death would be cleaner.” Daenerys is told there is a price for blood magic: only death pays for life. “Bring me his horse.”

“What have you done?” Jorah is scared. The horse screams. Voices scream that is not Drogo’s. Daenerys is shoved and Jorah duels with the aggressor. He wins but is injured in the process. Daenerys is hurt, the baby is coming. The midwives will not come, she is cursed. The witch can bring baby… The noises coming from the tent do not stop Jorah, he walks right in.

Back at the battle, Tyrion has had sex and is now playing with fire. They move from painful game to a game of truths and drinks. Shae does not want to play but Tyrion prods her to do so. He cannot figure Shae out no matter how he uses his wits.

“Try to penetrate the enigma that is me.” She pulls from him the story of his first wife. How Jamie set him up to think he had rescued a damsel. He fell in love, married her. She was actually a whore who Tywin paid to have sex with men of his guard, a silver for each man. He made Tyrion watch. Shae mounts him again, Bronn takes his leave.

Tyrion’s story about Tysha is similar to its version in the novels, with several changes: according to the novels, Tyrion was thirteen at that time, not sixteen; Tysha was the orphaned daughter of crofter, not wheelwright’s; after Tysha was gang-raped by the guards while Tyrion was forced to watch, his father forced him to be the last to take her.

This episode was Peter Dinklage’s submission in the Supporting Actor in a Drama Series category in the 2011 Emmy Awards- the first Emmy win and nomination in his career.

Cut to morning scene and Tyrion is still asleep!! The battle has begun! Bronn wakes them “You’re sleeping through the war!” And this exchange: “If I die, weep for me.” “You’ll be dead. How will you know.” And the TV scene that pisses me off so much because it makes Tyrion seem weak. This did not happen in the books…

I just think it lessens this great character. Bronn tells him: “Stay low.” I chuckle every time. They call “Half Man!” over and over but it is not like it is to dishonor him. Listening to the book, I truly feel as if the mountain tribes respect him in some way.

And then he is knocked out and wakes to a grisly scene. They have defeated the forces here but it was not full forces of Rob’s. The rest of Rob’s army is elsewhere….

WILHELM SCREAM: (at around 45 mins) The famous scream is heard on the battlefield in the aftermath of the Lannister-Stark battle.

At a different location, Rob on his white stallion has defeated Jamie Lannister and taken him prisoner.

“One victory does not make us conquerors. Did we free my father? Did we rescue my sisters?” Heavy is the mantle of leadership in battle.

Back at Kings Landing, Arya is chasing pigeons to survive.

Everyone starts running to the sound of bells. She finds out they are taking her father for a public announcement of some sort and she rushes to see…

She climbs up a statue so she can get a better look. Ned sees her and yells to Yoren: “Baelor!” Yoren sees Arya. Sansa is there, eyes red from crying. Ned lies through his teeth to tell the crowd he is a traitor and that Joffrey is the rightful king. Sansa expects Joffrey to be merciful. She could not be more wrong…

Prick. “The soft hearts of women. So long as I am your king. Ser Ilan, bring me his head.”

Yoren makes it to Arya just before the deed is done and pulls her to his chest so she cannot see the inevitable.

This is the perfect picture. That smirk…

It was revealed in an interview in March of 2018 with Sean Bean, that when Ned died, he whispered a small prayer to himself. In the beheading scene, he is mouthing some words, which up until then were a mystery.

Ned Stark’s beheading is slightly different from the book in a few notable ways. First, in the show Ned actually sees Arya in the crowd and sends Yoren to get her. Saving Arya from being captured ends up being his last living action. In the book, he does not know Arya is there and Yoren sees her himself. In addition, it is also notable that Arya and the reader do not actually see the moment Ned is beheaded. The chapter is from Arya’s perspective and in that moment she is being carried away by Yoren after she unsuccessfully tries to use Needle to cut her way to the front of the crowd.

I can honestly say that with Ned’s beheading, I was all-in for this show. Any show that would take a beloved character and then unexpectedly hack off his head – it was unlike anything I had ever seen before. I didn’t think I could be so blown away by anything like this ever again.

Boy was I wrong.