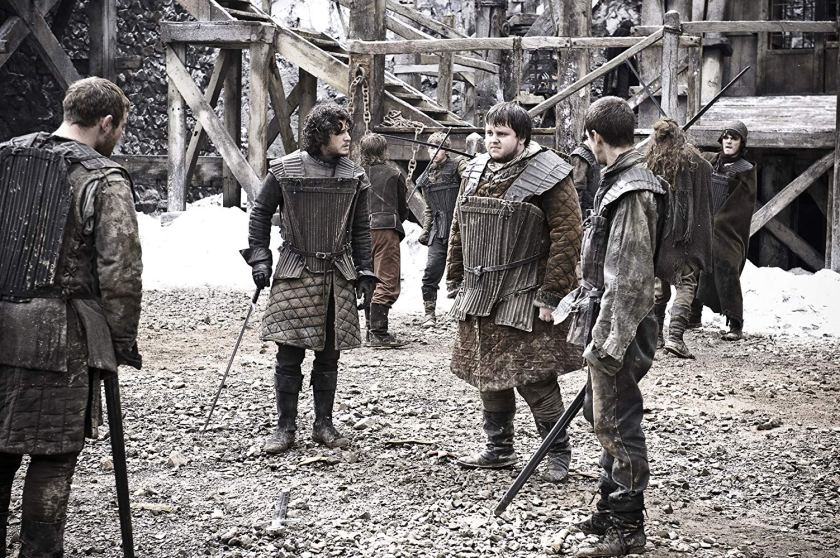 In the opening credits we see The Narrow Sea, King’s Landing (Baratheon sigil), The Bite sea, Winterfell (Stark sigil), The Wall, Dothraki Sea, and Vaes Dothrak. No new cities added this opening nor changing of sigils.

We open on Winterfell and Bran, bow in hand and a raven flying past and into the crypts. This has to be a dream. A dream that does not bode well. And we then see, center frame, a three-eyed raven!

Bran wakes from the dream to find Nan, ever at his bedside. Theon announces that they have visitors. He calls Nan an old bat. Arrogant asshole. Hodor comes in to unceremoniously pick up bran to carry him down to the hall where we see Robb entertaining Tyrion. The last appearance of Old Nan in the show. The actress Margaret John passed away on February 2011, two months prior to the release of the first season. Although the character makes more appearances in the books, the showrunners decided not to re-cast the role out of respect for John. It is therefore implied in the show that she died of old age, one of the few characters in the series to do so.

Tyrion comes bearing a gift for Bran, the schematics for a saddle that will allow him to ride horses again. He says the line which is also bears the name of the episode, “I have a tender spot in my heart for cripples, bastards and broken things.” Theon tells Tyrion to look up Ros at the whore house. Tyrion realizes that Lady Catelyn is not at Winterfell. When Theon tries to deflect the conversation, he is taunted for his station as “his enemy’s squire”.

We switch to The Watch and the introduction of Samwell Tarley. He is no fighter. He takes a horrible beating, yielded and was still beaten some more. Until Jon stands up for him. Alliser then pits two brothers against Jon and Samwell. Jon throttles them. In a humbling move, Sam admits that he is a coward (craven) and he understands that he will always be a coward.

Out into the Dothraki Sea we see the mouth of Vaes Dothrak. Viserys is still an obnoxious ass. This leads Daenerys into a conversation with Jorah and whether the Dothraki horde would be victorious. The conversation turns to his history of owning slaves. The scenes switches to Viserys in a hot tub with Doreah. They are discussing dragons and pouring hot wax on chests. She says an interesting thing: “I’ve seen a man who can change his face like other men change their clothes.” Did she meet the man who has no name? Did he pay her well, I wonder?? He has a scar through his nipple. Quite noticeable. Why? He tells her of the skeletons of the dragons that he saw as a child. They are passionate and just as suddenly and for no reason, he turns mean, like a viper. He is a horrible person.

When Viserys is reciting the names of the dragons whose skulls were in the throne room, he mentions Vermithrax. Vermithrax Pejorative is the name of the dragon in Dragonslayer (1981). GOT author George R. R. Martin once stated that Vermithrax was the best film dragon of all time.

Sansa and Septa Mordane walk through the throne room where the Septa explains how, when Sansa is queen, she will present her son in this very room.

She realizes that if she only has girls, no sons, that the throne would pass to Joffrey’s little brother. “And everyone would hate me?” She says she will never forgive her father. We switch to Ned’s face as he hears the issues while at the little counsel. There will be a tourney in honor of Ned being the new Hand of the King. As they dismiss, Ned asks Grand Maester Pycelle about the circumstances surrounding John Arryn. Pycelle tells him of the book John was reading, The Lineages and Histories of the Great Houses of the Seven Kingdoms. John Arryn’s last words “The seed is strong.”

Ned finds Arya in the hallway standing on one foot, training her balance. She tells him of her lessons with Syrio and that tomorrow she will be chasing cats as part of her training. She asks about Bran coming to live with them and his wanting to be a knight. They discuss his limitations. She asks if she can be Lord of a holdfast. Ned tells her she will marry a Lord. She says “No, that’s not me.” And returns to practicing her balance.

At the wall, Jon finds himself being paired up with Sam in the cold, cold night. He makes Sam move closer to the fire. “You can’t fight. You can’t sing. You are afraid of heights. What are you doing here?” Sam gives his origin story and how he came to the Black because his father felt he was not worthy of inheriting his titles and lands.

Little Finger catches up with Ned and as they walk through the gardens, he points out all of the various spies. He tells Ned who Lord Arryn had been visiting in his last days, in particular a man at the armorer. Ned admits that maybe he was wrong to distrust him. Then Petyr tells him something that will play so monumentally in later chapters, “Distrusting me was the wisest thing you’ve done since you climbed off your horse.” The biggest, most straight forward truth ever told during the whole series. Ned makes his way to the armorer and we are introduced to Gendry and his bull helmet.

Ned tries to understand why anyone would be interested in this young man. Lord Arryn had asked about his history, his mother. Ned commands Gendry to look at him square in the face. You can see the recognition in Ned’s eyes. This is a bastard of King Robert. And, just like that, we switch to Jamie, standing outside of King Robert’s bedchambers. You can hear Robert inside the room with women in passionate throes. Jory brings a message for the king and Jamie is (surprise) an ass to him as they talk about the battles they were involved in.

We return to the wall where Jon sits at the dinner table, instructing the others to not hurt Sam. Rast takes to making fun of him and refuses to hold back when it comes to training against Sam. We cut to a nighttime visit to Rast by Jon and his direwolf. “No one touches Sam.”

That bit of advice holds well as the next day we find no one willing to beat Sam on the training field.

Viserys drags Doreah by her hair through the tents to Daenerys saying “You send this whore to me to give me orders?!” Dany dismisses the girls and asks why he would hit her. He throws gifts into her face. He then tries to beat her but she hits back and puts him in his place. “The next time you raise a hand to me will be the last time you have hands.”

Jon and Sam discuss their virginities while scrubbing tables in the dining room. Jon says he had a chance with Ros back home. Ros really gets around. Ros was not mentioned in the books… ha! Jon explains that, as a bastard, he did not want to chance bringing another bastard into the world. Enter Alliser, the asshole. He always feels the need to try to keep a thumb on those young men in his “care”.

We go back to Jorah and Dany having a conversation about her brother and how he is not built to lead. Daenerys realizes that her brother would never be able to lead an army, even if Drogo did give him one.

We cut to the tourney where Little Finger introduces himself to Sansa. He explains to Arya that he was a small child and he lived on islands called the Fingers, so that is how they drew his name. On the field is The Mountain, looking all fresh and alive. It does not go well for his opponent, John Arryn’s former squire. Little Finger tells the Stark girls about how The Hound is the brother of The Mountain and how, as boys, The Mountain (in a fit of jealousy) put The Hound’s face to hot coals and held him there till his face almost melted off.

In the original novel, it was not Petyr “Littlefinger” Baelish who told Sansa how Sandor “the Hound” Clegane had been scarred as a child, but Sandor himself. He also warns Sansa that he will kill her if she tells anyone.

In this episode Mark Addy, as King Robert, oversees a jousting tournament. He had previously played Roland in A Knight’s Tale opposite Heath Ledger where jousting was the main event.

Cersei leaves the tourney to go see Ned in his office, missing the tourney being held in his name. He asks why she is there. She belittles his job as Hand of the King. She notes his brother was trained to lead and he was trained to follow. He tells her, “I was trained to kill my enemies, your Grace.” She responds, “As was I.” This whole episode is filled with truths being told straight to people’s faces and they aren’t listening to their intentions.

Along the road, in an inn, we find Lady Catelyn coming face-to-face with Tyrion who has just met Bronn. She rises above him and calls to each of the men in the room, reminding them of their allegiances to her father and to her childhood home of River Run. Once she has them all captivated, she then weaves the tale of how Tyrion supposedly came into her home at Winterfell and conspired to kill Bran. She then has them take Tyrion into custody so he can face the King’s justice.